MamaRoo: What’s the difference between the 2015 model vs the new 2017 version? 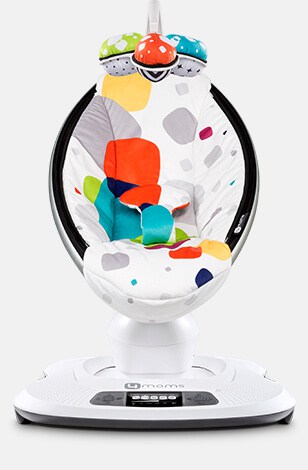 In case you’ve heard about the MamaRoo from a friend, but aren’t clear on what it actually is, here’s a quick 411. The MamaRoo is a popular if pricey bouncer/soother that first debuted in 2012 and then was revised in 2015. The MamaRoo 4 runs about $220 on Amazon. (FYI: there are two versions of the MamaRoo: Classic for $220 and the Plush for $250. As the name implies, the latter version has more plush fabrics).

So what’s new for the 2017 MamaRoo? The biggest change is the user interface—the 2017 version gains a much easier to use control panel. Here is a picture of the 2015 MamaRoo front panel: Note the new, larger power button which can be hit with a foot. This addresses a complaint with the 2015 MamaRoo—before, to turn the unit on, you had to hit the tiny motion button (most likely with your fingers, after bending over).

Overall, we found the new interface more intuitive. Before, it was confusing as to what the buttons and arrows were supposed to do; now you can raise or lower the music volume with your foot. The motion button (to the left) changes the unit from car ride, to kangaroo and so on. The downside is the speed setting now takes a couple of clicks to get to, while in the 2015 version you could do that from the front panel. Based on reader feedback, we believe most folks only adjust the speed occasionally, hence the change.

• Improved fabrics that are softer to the touch, even in the Classic model.

• Upgraded mobile. The 2015 MamaRoo had a mobile that was basically three fabric balls. The 2017 version adds touch points—a rattle ball, crinkle ball and a ball with a mirror. Unfortunately, the mobile doesn’t spin by itself—you have to do that manually. You think for $200+ price, MamaRoo could throw that in, but alas, no.

• App upgrades. When the 2015 model debuted, it came along with Bluetooth connected app that enabled you to change the motion and speed from your smartphone. The 2017 model will have an app with upgrades . . .but 4Moms was not specific has to what new features will be added to the app. We will update this when we learn more.

The MamaRoo 4 (2017) is now available from Amazon. Click here to purchase.