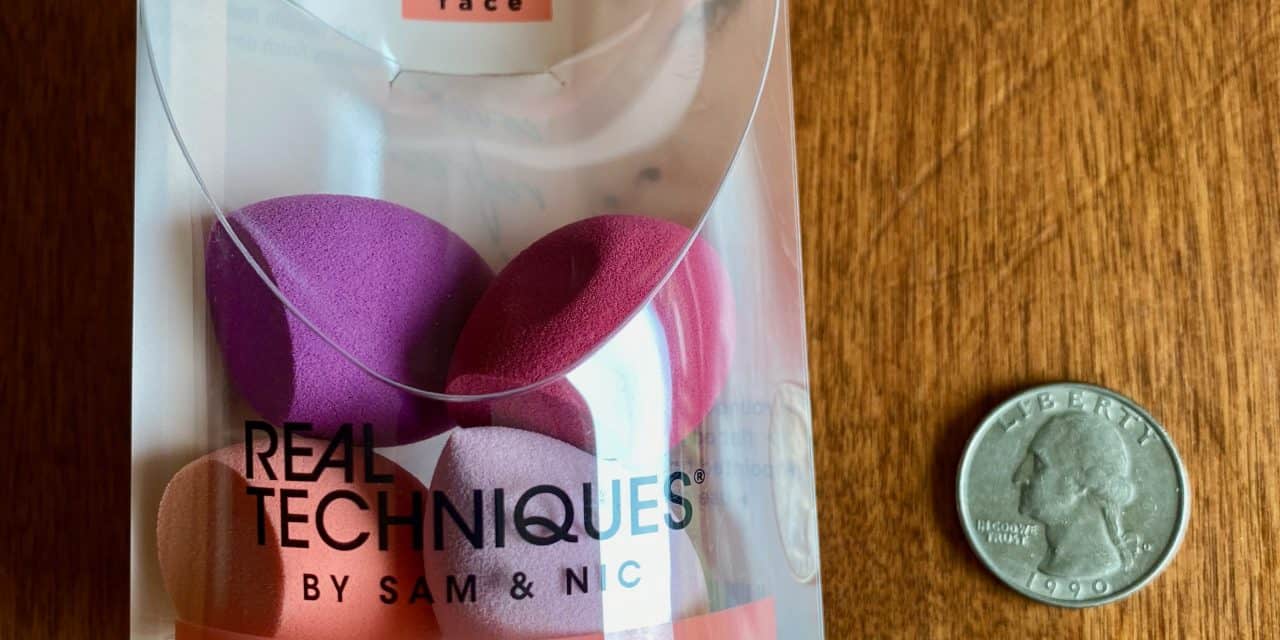 What are the best makeup blending sponges? To find out, we ordered the famous Beauty Blender and 5 similar competitors to see what worked best. Which were easiest to clean? Lasts the longest? Good news: we found you don't have to drop serious coin to get a good makeup sponge. Bonus: we also found other clever uses for these sponges—like putting sunscreen on a toddler's face. Much easier than other methods!

FYI: We've been reviewing and rating products for the home, parents and families since 1994. Nope, we don't take freebies or money from the brands we review! Yep, our work is 100% reader-supported! 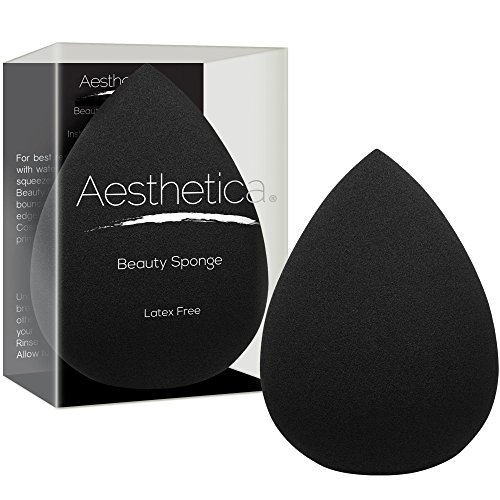 100% vegan and cruelty free
We loved this sponge for its smooth application and easy cleanability. Black color makes it easy to see where the product is, but some folks wish it was a bit softer.
$4.96

For a long time, the only option here were disposable sponge wedges sold in drugstores. They could get pricey (since each one was single use) and the performance was so-so.

Along came the neon-pink, egg-shaped BeautyBlender and makeup sponges haven’t been the same since. Released in the early 2000’s, this sponge mimicked the look of air-brushing  . . . without all the effort and cost.

Makeup artist Rea Ann Silva invented the BeautyBlender sponge, after the demands of then-new HD television in the 90’s required better makeup techniques. “I couldn’t just keep piling 52 layers on these girls with a clunky airbrush machine and have them looking fresh as a daisy at day’s end,” she explained in an interview with the Violet Grey blog.

Silva invented the sponge by cutting the ends off a square sponge and the rest is makeup sponge history.

As parents, we found an additional use for these sponges—applying sunscreen to the face of a reluctant toddler! These were surprisingly effective, making the whole task much easier.

The success of the BeautyBlender has spawned a host of similar competitors. To find out which is best, we tried out several of these egg-shaped sponges along with the name brand BeautyBlender. Which performed best? Was easiest to clean?

FYI: Most of these sponges last for about three months before they need to be replaced.

One tip: store your sponge in a plastic egg (or the original packaging it came in).

Also: when using a makeup sponge for the first time, we suggest soaking it for a while (5-10 minutes). Why? Dye from some sponges can stain clothing or hands when they are first used. Soaking it initially solves that problem!

For the best budget-friendly blender beauty sponge, we decided Aesthetica is the best bet for most folks. It performed well . . . at a price that was much easier on the wallet. Here’s more:

• Black color enables you to see exactly where the makeup/sunscreen is. We liked this better than other sponges that were lighter in color.

• Easy to clean with mild soap and water. We judged this sponge the easiest to clean among those we tested.

• Not as soft as some would like. Yes, the texture is different than the name brand—but we liked it. Others found it too rough and the sponge too dense.

• Absorbs too much makeup, say some folks. Well, we thought it worked well . . . but we wonder if different makeup prompted some of these concerns among other folks. 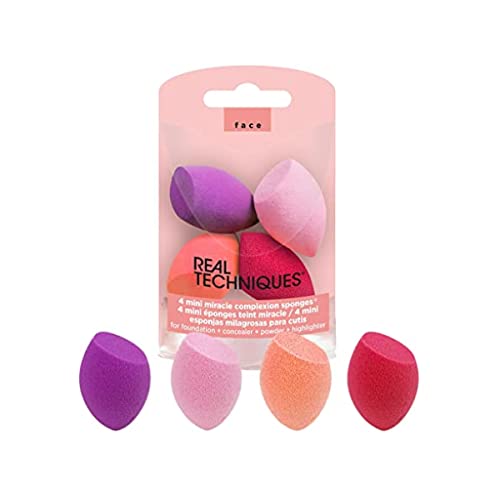 Latex free, easy on the wallet!
These small sponges (about an inch and half wide) are great for applying makeup under the eyes or on an eyelid. We also liked them for applying sunscreen to the face of a wayward toddler!
$6.65 ($1.66 / Count)

Once you get hooked on makeup sponges, you quickly realize one is great . . . but more is better. With a sponge set, you can designate one sponge per product: a sponge for foundation, another for concealer, a third for powder, etc.

We tried out several sets of beauty sponges before deciding BEAKLY’s five piece set had the best performance, while still being affordable.

• Too porous? Yes, we noticed these sponges tended to absorb more product than others. You might want to go slow and test out quantities before going at full speed!

• Durability could be better. While we liked these sponges, we wish they were more durable. Then again, they are quite affordable so you can replace them without breaking the bank. 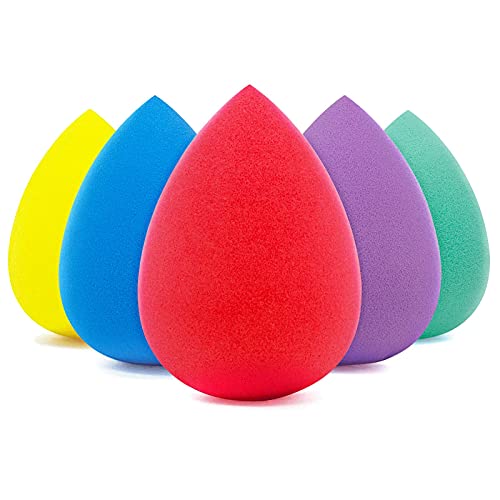 Easy to clean and affordable
Fantastic quality and soft texture—we loved this set of sponges. If you use several products, you can designate one sponge for each. Latex free.
$8.99 ($1.80 / Count)

When it comes to concealer under the eyes or eyelid areas, full-size beauty sponges don’t work as well. The solution: mini sponges. We tried out a few of these before deciding Real Technique’s version is the best bet for most folks.

We also liked mini sponges to apply sunscreen to the face of smaller toddlers—it was just easier than larger sponges or your fingers.

• Could be softer. These sponges are definitely rougher than others we tested. We thought they were the best of the mini-sponge bunch, but we know some folks with sensitive skin may not be as happy.

• Too absorbent? This is a matter of opinion—some folks think these sponges absorb too much product. We didn’t think that was the case in our tests, however.

• Some folks are surprised on how “mini” these mini sponges are! To give you an idea of the size, here are some comparisons. First, the entire package compared to a quarter:

And here’s what one sponge looks like, for size comparison: 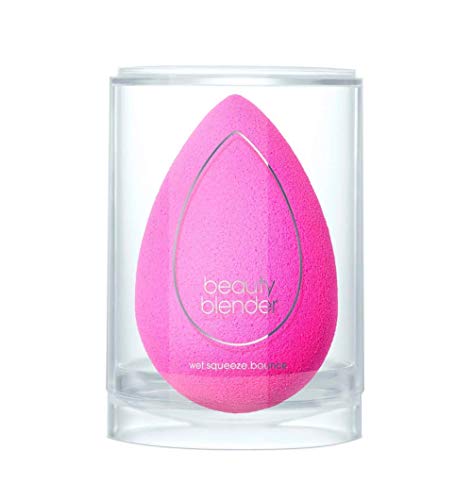 Made in the USA
Fans swear by this sponge—and after testing it, we see why. It is the softest and did the best at absorbing the least amount of makeup. But is it worth the price premium? That depends!
$20.00

Yes, this is the sponge that started the craze!

This  sponge debuted about 20 years ago and has since defined the category. It’s iconic neon-pink color and egg-shape have spawn a series of competitors . . . so how did it stack up in our tests? Here’s what we thought:

• Excellent at that edgeless look.

• Made in the USA. That’s nice, because most competitors are imported.

• Expands to about twice its size when wet.

• Saves on makeup? Fans of this sponge say you’ll use less makeup per application—that’s because older disposable sponges absorb too much product . . . which can be expensive! After trying it out, we’d agree—but we also think other competitors in this article perform nearly as well.

Honestly this was hard to judge in our tests. We do think we used somewhat less makeup than other sponges. But is it enough to justify the cost? That’s hard to judge. We could certainly see one way folks would prefer this premium product—if you use very pricey foundation or concealer. In that case, this sponge may be worth it!

• Price. While we like this sponge, we just can’t get over the price—yes, we know, some folks think it is the softest. And if you have sensitive skin, we can see why you might want to pay a premium. Otherwise, it’s hard to justify the price.

Bottom line: is the BeautyBlender worth the money? Or do less-expensive competitors perform just as well?

Our verdict: while we liked the BeautyBlender and thought it was a quality product, the other sponges we recommend here performed just as or nearly as well.

We’ve been rating and reviewing products for the home, parents and families since 1994. We do hands-on testing—we buy the products with our own money and evaluate with an eye toward quality, ease of use and affordability.