We bought and tested SIX different formula dispensers to crown the winner. Which was the easiest to use? To clean? And given the cost of formula, which left the LEAST residue behind? Here are our picks! 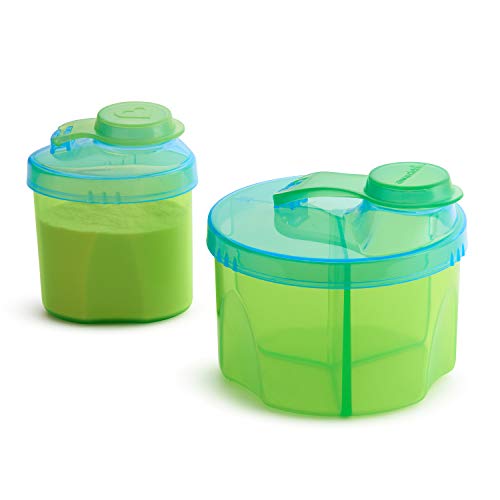 Finding the Best Formula Dispenser: What We Looked For

While formula dispensers may seem like a no brainer, our tests revealed some subtle pros and cons.

The point of a formula dispenser: you can pre-measure powdered infant formula into the three or four compartments of a dispenser and throw it in your diaper bag with some water-filled baby bottles (use purified, demineralized, deionized, or distilled water).

When we tested formula dispensers, we were surprised to find they have some very real differences. Here’s what we looked for:

Based on our testing, here are the pros and cons of the Munchkin Powdered Formula Dispenser Combo Pack:

• Best pour. This the only dispenser we tested that didn’t require banging on the bottom like a ketchup bottle–a potential recipe for disaster if you bang too hard. Pretty much all the formula came out in one stream; better than any of the others we tested.

• Easy twist. No problem rotating the top to the next compartment.

• Some migration of formula. While it definitely wasn’t a lot of migration, there was some formula from other compartments that moved around. We don’t think it’s enough to be concerned, however.

• Formula sticking to the side/lid. There was more formula that stuck to the lid of the compartment than we’d like, but again, not so much that it is a concern. 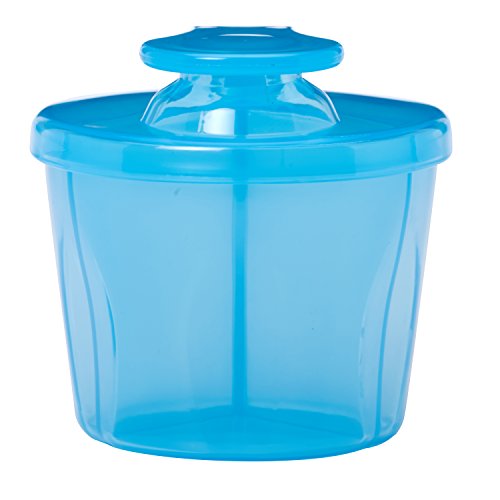 No leaks in our tests
Formula doesn't migrate much from one section of the dispenser to the other and the lid stays on tight! Great if you have to take this dispenser on the road!
$4.99

What impressed us most about this dispenser: no formula stuck to the sides during our tests. It’s the only one we tested that didn’t stick. Migration of formula did occur with the Dr. Brown’s but it was minimal, so we’ll give it a pass here.

What’s not to like? Many parents we interviewed complained that the lid on Dr. Brown’s was difficult to twist to the next compartment–some even suggested removing the lid and repositioning it although there is a risk of spilling.

In our tests, we didn’t have as hard a time moving the lid as parents we interviewed, but it was somewhat more difficult than the other dispensers we tested.

Overall, though we can recommend this dispenser as a good runner up. 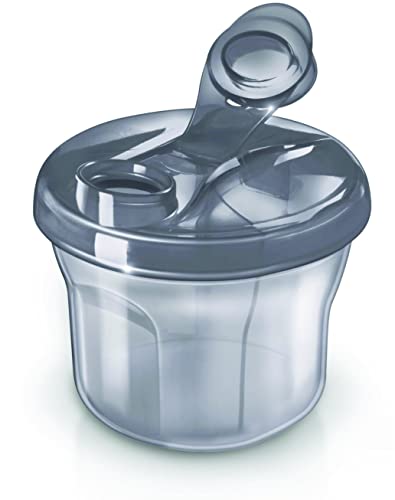 Morphs into snack container
Avent's taller, narrower size may fit better in a diaper bag. Can remove divider and use as a bigger snack dispenser.
$5.99

Avent’s formula dispenser looks similar to Dr. Brown’s, but doesn’t rank quite as high in our tests. Why? Migration of formula from one compartment to the others AND the amount of formula sticking to the sides knocked it down compared to our top pick. However, it still scored third best out of six containers we tested.

We like the taller, slimmer profile (may fit your diaper bag better), although the pour required some banging to get all the formula out. Overall, it’s a decent runner up.

What’s best about this dispenser: it can morph into a snack container for older kiddos by removing the partition! 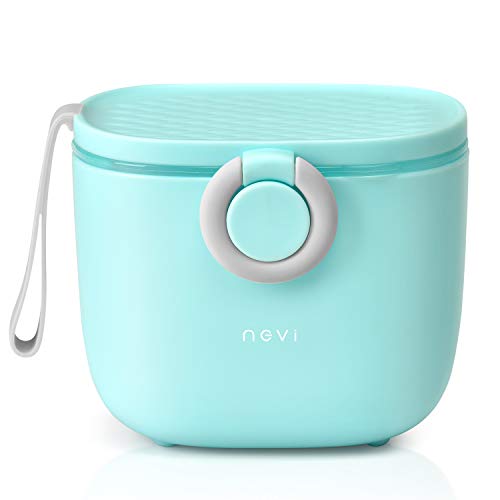 Yes, it comes in pink too!
If you're looking for a shower gift idea, this dispenser scores high on the cute meter. Caveat: included scoop means only 1 ounce (not standard 2 ounces you see in other scoops).

Let’s be honest—most formula dispensers are designed for utility, not cuteness. If you want to give a dispenser as a gift at a baby shower, we liked NCVI’s dispenser . . . in baby blue or pink. It makes quite the statement—and it works well too.

Formula dispensers are basically Tupperware style plastic containers with three or four separate compartments. Parents told us all the things that frustrated them about using formula dispensers and we developed five categories for our testing.

1. Twist test. Does the lid twist easily to the next compared to competitors? You don’t want to develop carpal tunnel syndrome from your formula dispenser.

2. Formula migration. Next, we filled a compartment with formula and replaced the lid. Then we shook the heck out of it to simulate riding around in your diaper bag. After shaking it up, we checked the empty compartments to see how much formula migrated out of the original formula compartment. See example:

3, Pour test. The most important test was the pour test. We tried pouring the formula from each dispenser into a standard baby bottle (not a wide mouth). We noted how much shaking and banging it took to get all the formula out of the dispenser and into the bottle.

4. Sticking. Finally, we looked at how much formula might have stuck to the sides or lid after we poured it into the bottle. Some dispensers had little sticking, while others had a remarkable amount of formula that stuck. Here’s an example of the worst offender from Joovy: 5. Price. While most formula dispensers are priced around a similar point, a few like the Joovy were more pricey. As always, we look to see if there is some justification for a higher price point.

We’ve been rating and reviewing baby gear, including baby bottles and formula dispensers, since 1994. We do hands-on testing—we buy the products with our own money and evaluate with an eye toward safety, ease of use and affordability.