What is the best hookless shower curtain? And why should you get a shower curtain that is hook free? We gathered 10 shower curtains that require no hooks to compare—which was easiest to install? With snap-in liners that can be easily replaced? Here are the ones we'd recommend!

FYI: We've been reviewing and rating products for the home and families since 1994. We don't take freebies or money from the brands we review—that keeps our work independent! Our reviews are 100% reader-supported. Thanks for reading this article! 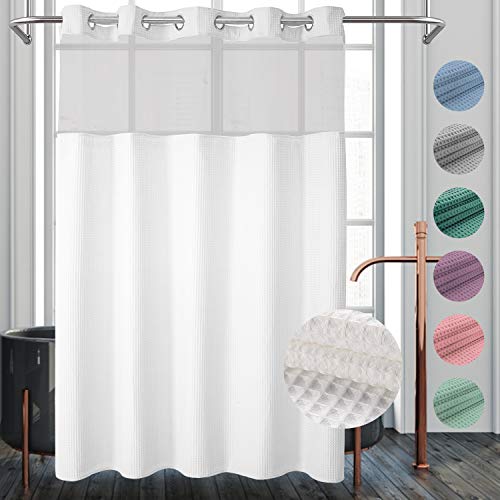 Mesh panel provides ventilation
We loved the heavyweight, waffle-weave cotton blend fabric for this shower curtain. Easy to install. Snap-in liner can be removed for cleaning or to replace—very nice!
$37.99

Shower curtains come in two basic varieties: those with hooks and those without.

For this article, we focus on the latter, since they are increasingly popular for reasons we'll discuss below. First, however, we should note Hookless Shower Curtains is actually a trademarked brand (we will recommend one of their shower curtains in this article). The company behind the concept actually debuted the Hookless shower curtain back in the late 1990's.

Since "Hookless" is a trademark of that company, other similar shower curtains without hooks are referred to as hook free or no hook.

• Easy to install. You don't have to remove the shower rod—the curtain just snaps over it.

• Magnets at bottom keep it closed.

• Snap-in liner can be removed to clean or replace.

• Mesh at top of curtain provides ventilation. That's nice if your shower area gets stuffy.

• Mesh at top of curtain provides ventilation. Yes, this is both a pro and con. If your bathroom is drafty, having a mesh panel lets some of the heat escape—and that can be cold for some folks.

• Snap in liner is shorter than the shower curtain itself. That bothered some folks, who found the over curtain can get wet in some tub configurations.

• More magnets please! We like shower curtains that have more than just two to keep it in place.

Super easy installation
Great overall quality and construction—snap-in liner can be machine washed or replaced. FYI: Frost grey color has a touch of purple, which we liked. Window panel lets in light.
$24.43

Yes, this is the O.G. Hookless Shower Curtain—and it is our pick for best fabric hookless shower curtain. We liked the overall quality and look. Here's more:

• Snap-in liner can be removed for cleaning or replaced.

• Higher quality fabric than other shower curtains we sampled.

• Liner is plastic—and has no weights/magnets. This didn't both us (after all, the plastic makes it waterproof and easy to clean). And the liner stayed in place. But we can understand how that might not work for some folks, depending on the design of their shower area.

• Grey fabric has a touch of purple. That didn't both us, but some folks are disappointed it isn't more dark grey. 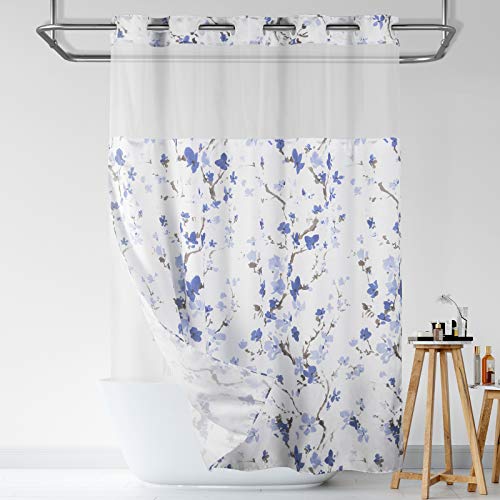 Machine washable liner
Probably the prettiest shower curtain we tested—easy to hang, mesh/see through area lets the light in. Design is on trend, even though it is a little darker in person than in pictures.
$34.99

If you are looking for a bit more a farmhouse or boho style hook-free shower curtain, we'd recommend Laguet's SnapHook Nature shower curtain. Very good quality and easy to clean.

• Plastic liner can be machine washed (but only line dried).

• Subtle floral design is a winner for those wanting a farmhouse or boho theme. 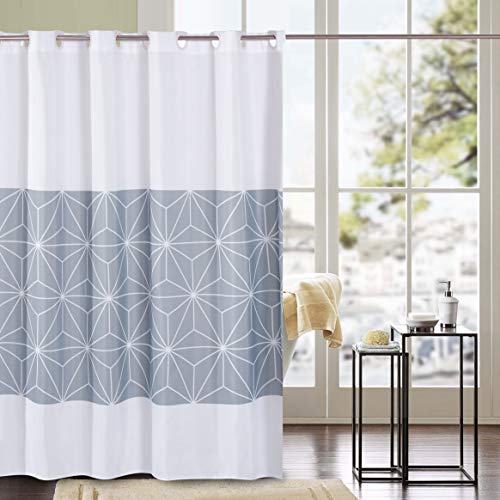 100% waterproof fabric
This hook-free shower curtain is super easy to install and does away with the plastic snap-in liner that some folks find to be a hassle. Magnets at bottom keep it in place.
$20.99

Most hook-free shower curtains have a plastic snap-in liner than can be removed for cleaning or replacement. While these are popular, we know some folks would prefer not to have to deal with it. That's because with some shower curtains, the liner is shorter than the actual curtain . . . which means the fabric curtain can get wet.

For those folks who'd prefer not to mess with a liner, we'd recommend HUIEI's Hookless Shower Curtain. The entire curtain is 100% waterproof, so no liner need. Here's more:

• Magnets at bottom keep it in place.

We’ve been rating and reviewing products for the home and families since 1994. We do hands-on testing—we buy products with our own money and evaluate with an eye toward quality, ease of use and affordability.

Here's another key point: we don't take money from the brands we review. No free samples, no sponsors, no "partnerships." Our work is 100% reader-supported!