Summer is to video monitors what Fisher Price is to baby swings—they are virtually synonymous with the category, having debuted the very first video baby monitors 20 years ago.

One of Summer’s first baby video monitors in the 90’s is pictured at right—it featured a ten-pound analog TV “parent unit” that streamed your baby’s nursery in all its black and white glory. Cost: $500, in today’s dollars.

One of the more confusing aspects to Summer’s video monitor offerings is the shear number of models—and it often introduces new models at a dizzying clip. Summer lists 13 current models on its web site, but then there are older year models still for sale online. Example: a simple system with fixed camera and tiny 2″ screen (Summer Glimpse Video Baby Monitor). That’s right—a video baby monitor for just $89.99. Sure, the 2″ screen is so tiny that it’s ridiculous . . . but it is under 100 bucks.

Summer’s newest video baby monitor is the Baby Pixel 5.0 inch Touchscreen Color Video Monitor for $100.01. It offers a 360° remote tilt capability, voice activation talk back, temperature/time display, and allows up to four different cameras. What’s really cool, however, is the Sleep Zone Virtual Boundary. You can set a boundary area around your baby’s crib and the monitor will beep at you if anyone or anything enters or leaves the boundary area. 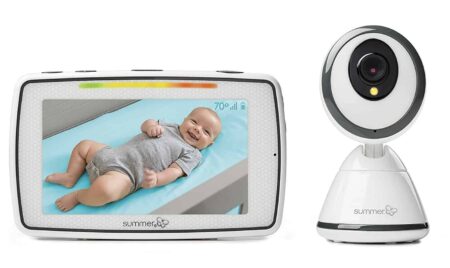 One monitor category Summer has failed to crack is the streaming market—that is, baby monitors that stream online via WiFi. Summer has tried and failed repeatedly here, most recently with the BabyTouch Digital Video Monitor ($180) features a 3.5″ parent unit and a free app (Summer Link) that streams the video to a smart device. So what do parents think of Summer’s hybrid streaming/closed baby monitors? Spoiler alert: it’s not pretty. Take a look at the reviews of Summer’s app on the iTunes or Google Play. Most of the reviews are 1-star.  Basically, the app that allows online streaming either doesn’t work, isn’t reliable, won’t load—or all of the above.

This seems to be a trend with baby gear monitor makers—they may know the hardware (camera, parent units), but when it comes to apps, software and online streaming, not so much. We’re not sure who Summer is hiring to do their app coding, but they need serious help.

What about Summer’s non-streaming monitors like the ones we discuss above? In recent years, reader feedback on Summer monitors has turned largely negative.

Common complaints include dropped signals between the camera and parent unit, batteries that won’t charge and poor night vision. How poor? Here’s a screen shot from a review posted to Amazon: To Summer’s credit, in the last year, Summer improved the night vision (calling it Moonlite Night Vision) in its most recent models—but so what? Good night vision has been standard on all baby monitors since 2010. Merely to catch up with the market is not impressive.

Perhaps our biggest gripe with Summer is their monitors’ long-term reliability. “Awesome—while it worked . . . then it died” is a common review from our readers, with parent after parent reporting units dying after several months, touch screens that stop working, out of range alerts when the monitor is close to the baby’s room, etc. We realize baby monitors get intense use (on 24 hours a day), but we expect more from Summer. As a veteran of this category, Summer should have better quality control.

The sad reality for Summer: they are now an also-ran in a category they literally invented. Summer clings to old technology (like 640p, which the company somehow labels as “HD”) while other monitors are now produce pictures with twice the clarity (1080p). Summer’s streaming monitors have been so bad they make Apple Maps 1.0 look like a smashing success. And with the more cameras including onboard processing for sleep analytics (Nanit, Miku), Summer’s basic monitors are looking more out-of-date than ever.

Bottom line: this brand only gets a C-. Summer must aggressively address quality and long-term reliability issues to right its ship in this category. Rating: C-