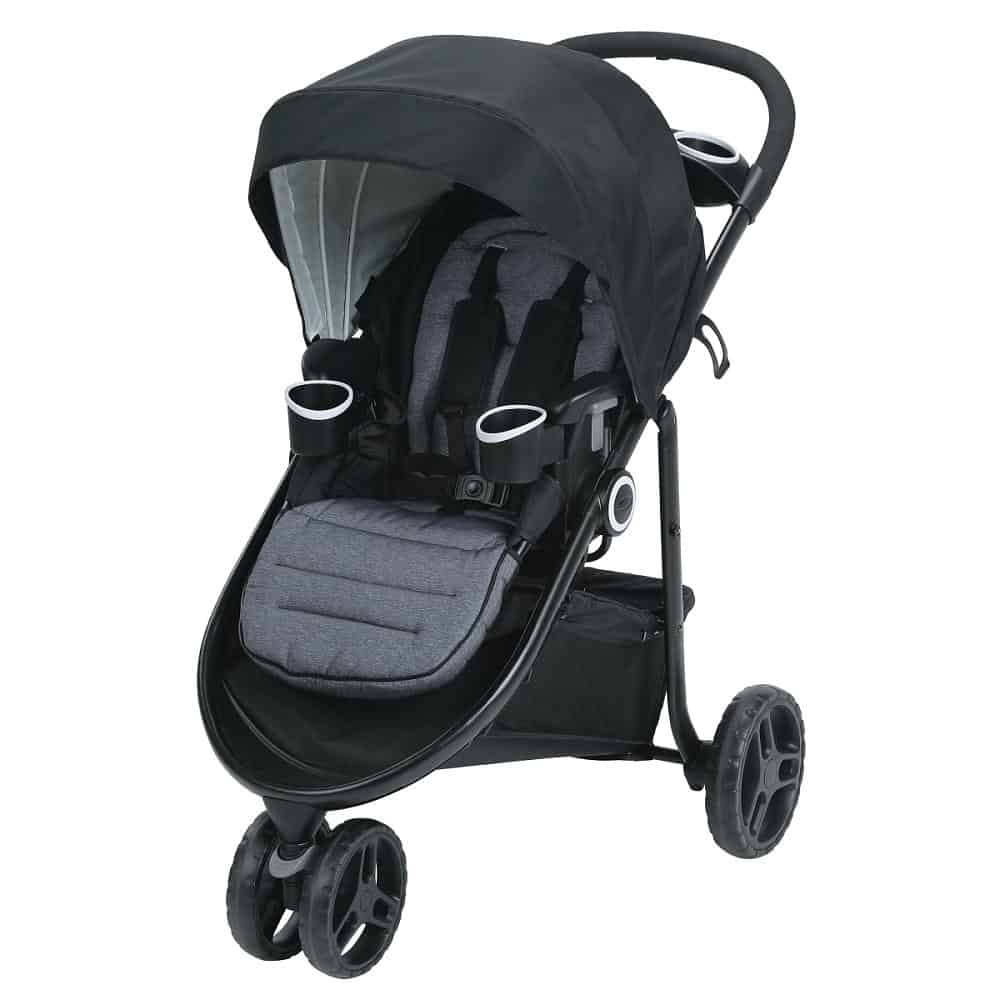 Graco’s main stroller niche is the travel system combining an infant car seat and stroller and aimed at first-time parents who want all the bells and whistles. The secret to their success is their excellent infant car seat, the SnugRide.

Graco is like the Honda of strollers—a mid-priced brand with decent quality, but not a lot of pizazz. You’ll find Graco in most chain stores like Target.

Graco’s line is huge (48 models at last count), so we’ll hit the highlights:

FYI: some of Graco’s strollers are exclusive to certain chains. Strollers often go on exclusive for a year or more, then come off exclusive and are more widely available.

Whew. Deep breath. Let’s look at the stand-outs in each Graco stroller category:

• Lightweight. The Modes and Fast Action strollers are the stars here.

The Graco Modes Click Connect stroller ($190; pictured at top) is 23.3 lbs. (which pushes the concept of light weight to the outer limits of reality) and features a reversible seat, one-hand standing fold and removable child tray. You can use Modes just as a stroller frame to transport the infant car seat (by removing the stroller seat). All told, the Modes stroller converts into ten different configurations.

As with all Graco strollers, you also get Graco’s generous parent tray with cup holders. Feedback on the Modes has been quite positive and we’d recommend it. Price: $190 as a stand-alone model or $250 as part of a travel system with the SnugRide Click Connect 35. Our only reservation about the Modes: at this price point, you are getting up into Baby Jogger City Mini price territory. And the City Mini, while lacking the reversible seat, is six pounds lighter with an easier fold.

New in the past year, the Aire4 XT (24.9 lbs.) stroller features all terrain rubber wheels, large canopy, one-touch brake, large basket and one-hand fold. This stroller is sold as a travel system with the SungRide 35 for $350. 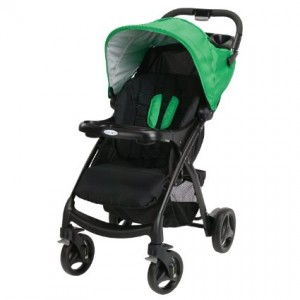 At an opening price point, the Verb (18.2 lbs; $98 as a stand-alone model or $127 as a travel system with the Graco Dangling Participle car seat—sorry, grammar humor) features front suspension and a one-hand fold.

Finally, there is the Graco Comfy Cruiser (16 lbs.), which features a one-hand, standing fold. Price: $150 as a travel system with a Graco SnugRide 30.

Graco is releasing two new lightweight strollers in the summer of 2017: the JetSetter ($170) is a 14 lb. stroller with car seat adapters and an extended canopy. Also new: Travel Lites, an umbrella-style stroller for $79 with cup holder, partial seat recline and carry handle. These strollers were not quite on the market as of this update. 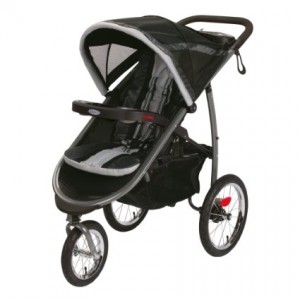 Jogger). Even though these strollers are billed as joggers, they really are designed for walking on trails, not running. The turnable/lockable front wheels on the FastAction Fold Joggers make the strollers more maneuverable, but less ideal for actual running.

For 2017, Graco is launching a refresh of the FastAction Fold jogger, dubbed the Roadmaster. The major new feature: an adjustable height handle bar. Price: $180 as a stand-alone model or $300 for travel system. The Roadmaster has just debuted, as of this writing.

The Graco Aire3 is also comparable to the Baby Jogger City Mini or Britax B-Agile—a tri-wheel stroller with a quick fold, parent console and fully reclining seat. Price: $138. Very similar to the Aire3 but slightly narrower is the Graco Pace ($100 at Target).

The Graco Relay ($380 as a travel system, 27 lbs.) is an all-terrain stroller featuring air-filled tires, suspension and an included car seat adapter. The canopy features reflective fabric and UV50 protection.

New in the past year, the Modes 3 Lite features a reversible seat, large canopy, single touch brake and the FastAction fold mentioned earlier. One cool feature: the seat removes so you can use the Modes 3 Lite as a stroller frame to snap in a Graco car seat. Or the car seat can fit on top of the seat. And the infant seat can face toward the parent or outward. Price: $166 as a single stroller, $262 as a travel system.

Multi-function strollers. New for 2018, Graco is debuting the Uno2Duo. As the name implies, this stroller morphs from a single to double stroller. The Uno2Duo joins the crowded multi-function market dominated by the Baby Jogger City Select and Britax B-Ready.

The Uno2Duo has a seat that faces forward or toward the parent . . . and the seat itself morphs from lay-flat bassinet to upright stroller seat. The Uno2Duo is sold as as single stroller ($319) or double  ($409) or even a travel system (single stroller plus infant car seat SnugRide SnugLock, $449). If you get the Uno2Duo as a single and want to add the second seat, you can purchase it as an accessory for $99.

That pricing is impressive: the Baby Jogger City Select runs $417 with a second seat at $138. So the Graco Uno2Duo will be a strong competitor at that price point. (Graco owns Baby Jogger, so in this case the company may be cannibalizing its own sales).

One unique feature: a stand-on board at the back for older toddlers too big for stroller seats.

The Uno2Duo has a phased roll-out: April 2018 in Buy Buy Baby and July on Amazon.

We saw a prototype of the Uno2Duo and was impressed (see video preview below). The only hitch: the pre-production prototype we previewed weighed 29.9 lbs—that’s too hefty, in our opinion. But we’ll have to wait to see the final production version in the wild before giving a final opinion. 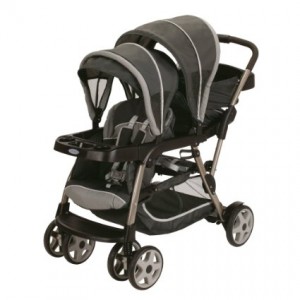 • Double strollers. Most of Graco’s offerings here are tandem (front/back) doubles, such as the Ready2Grow. It features 12 seating positions, the ability to hold two infant seats, and a removable rear jump seat with harness that can hold an older toddler. The Ready2Grow runs $144 and weighs in at a hefty 32.4 lbs. This stroller seems squarely aimed at the Joovy Big Caboose market.

The DuoGlider ($140, 29 lbs.) is also a front/back tandem. Graco’s claim to fame in this niche is “stadium seating,” where the rear seat is elevated. Of course, you get all the standard features: huge storage baskets, removable canopies, etc. Cool feature: The DuoGlider holds two Graco infant car seats.

New to the lineup is a model that is similar to Baby Trend’s Sit N Stand: the RoomFor2. This stroller holds a 50 lb. child in both front or rear jump seat and features a large basket, one-hand fold, parent tray and the ability to hold a car seat in front. The child in the rear can sit or stand. Price: $96, 24.7 lbs.

• Misc. Graco has a couple of other strollers that don’t quite fit into the above categories. 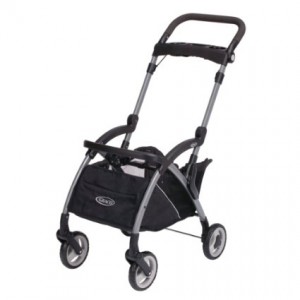 Graco’s entry in the stroller frame category, the Snug Rider Elite, is a winner—this $90 frame holds, what else? the Graco Snug Ride infant car seat with a secure lock-in feature and has a one-hand fold and basket. This model also has integrated cup holders, zippered storage and one-hand fold. Price: $76.

Travel systems are a major part of the Graco stroller line-up, where a Graco stroller (like the ones reviewed above) paired with a Graco infant seat in one box. Graco does sell some travel systems that include older model strollers not sold separately.

There are a slew of other Graco travel system models out there (Stylus, etc.)—most of these strollers are “full-feature” models with large storage baskets, parent trays and reclining seats.

Our view. Graco has slowly improved its stroller line over the past several years. The brand used to be known for selling mostly bulky travel systems with hulking strollers that weighed 30 lbs. empty. Today there are more three-wheel options and strollers that have slimmed down, weight wise.

The best options here are the Modes and FastAction Fold Sport strollers. Fans of the Modes like its ability to have baby face you or out—the ten riding configurations are a plus. The fact that the seat removes and you can use the remaining frame to snap in an infant car seat is another major plus. Critics of the Modes point out the stroller is still rather heavy and bulky—23.3 lbs with seat is light for Graco, but heavy when compared to the competition.

Of course, despite the generally positive reviews, Graco strollers aren’t without their faults. Look at how some Graco strollers fold up . . . when folded, the front tray hits the ground, inevitably damaging or scratching it in a parking lot. Parents also complain about canopies that offer less than full coverage (note that several of Graco’s new models include fully enclosing canopies). And the steering on most Graco strollers is only so-so. These strollers were designed for the mall or smooth sidewalks.

Graco strollers are bulky when folded—even the lightweight ones can eat up the entire trunk of an average sized car. Factor this into your decision if your ride is a small compact.

Another caveat: if you go for a Graco travel system, be aware that there are several versions of the Graco SnugRide car seat. Be sure to read our round-up on the different models and confirm which one comes with what system.