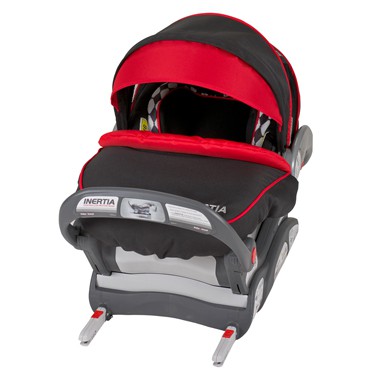 Cons: Rigid latch may not work in some vehicles.

Comments: The Baby Trend Inertia debuted back in 2013 and features a “controlled motion base” that moves the seat up and at an angle in a crash. There is also an anti-rebound bar, a first for a Baby Trend seat. The straps on this seat are easy to adjust with a knob on the back of the seat. Rounding out the features is an ergonomic handle and 32 lb. weight limit (Baby Trend’s previous infant seat only went to 30 lbs.).

The Inertia includes a rigid latch connector—and that could mean some trouble fitting in vehicles. Most infant seats have flexible latch straps instead of rigid for that reason.

At $180, Baby Trend is pricing this seat at almost twice as much as the company’s other infant car seat (Flex Loc)—and at about the same price as the highest-rated Chicco or Britax seats. And a second base for another vehicle runs a pricey $76.

Initially, we rated this seat an A- minus when early field reports on the seat were positive. However, now that we see more real world feedback, we are dropping the grade. Why? We’ve seen multiple reports that the recline feature on the seat doesn’t work. We’re not sure if there was a defective batch of seats or what, but that is very disappointing for such an expensive car seat. Adding insult to injury, folks had to navigate Baby Trend’s notoriously lackluster customer service (40 minute waits on hold, etc.) to get replacement seats. As a result, we can’t recommend the Inertia.

A 2017 crash test by Consumer Reports gave this seat a “better” crash rating (basic, better, best), but the seat’s overall rating was 20th out of 30 seats tested. For CR, poor vehicle fit with a safety belt pulled down their overall assessment—and that dovetails with what we see in reader feedback.

Quality woes dog this seat, like other Baby Trend car seats. We see reports of harness clips that broke, recline buttons that doesn’t reclining and so on. Not good for any infant car seat, especially one that is $180.

FYI: Baby Trend discontinued the Inertia in 2015, only to bring it back in the past year (it is now sold on Amazon among other online sellers).

Baby Trend’s brief discontinuation of the Inertia coincided with the re-branding of this seat as the Muv Kussen, which is Baby Trend’s new Dutch-flavored baby gear brand aimed at the upper-end of the gear market. The Kussen sells for $260 and features the same base and somewhat upgraded seat fabrics. Baby Trend calls the Kussen a second generation Inertia.