Exclusive: Good Morning America blurs out flaming toddler shoe to hide Disney cartoon characters; ABC calls it a “mistake.” A trending story about a toddler’s light-up shoe catching fire in Texas was covered in an unusual way by ABC’s Good Morning America today. When airing a story on the shoe that caught fire in a Texas family’s minivan, the ABC show intentionally blurred out a picture of the shoe: Why? Because this is what the shoe actually looked like: 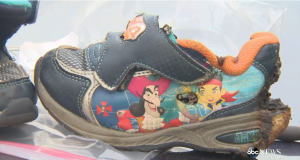 Shame on Good Morning America for blurring out a picture of the shoe—it’s ironic that Good Morning America aired the report to warn parents about the possible fire risk from lithium ion batteries in the shoes. But then they blur out the shoe so parents can’t identify the shoes that Payless has pulled from their stores? Hello?

We’ve reached out to Good Morning America for comment on this story and will update this when we hear back. Update: ABC spokesperson Heather Riley contacted BabyBargains.com late this afternoon to say the blurring of the shoes was “a mistake.” ABC plans to correct the video online to show the shoes clearly.

Good Morning America used footage from a Houston TV station that covered the story a couple of days ago. But the footage had the characters blurred out. Unfortunately, ABC has moved this video to their “private” area.

Here is the original report from KHOU in Houston, TX (which is a CBS affiliate):

Interestingly, a separate report that ABC posted online about the shoe fire didn’t blur out the shoes.

Please share this story with your friends in case they have these toddler shoes so they can return them to the store. The Consumer Product Safety Commission said they haven’t seen other reports on this hazard, but they are investigating.