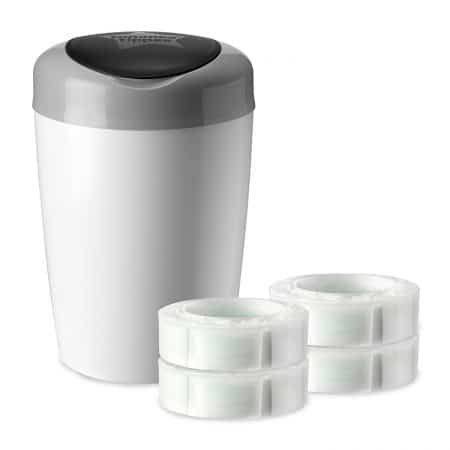 Cons: Pretty short and only holds 18 diapers so be prepared to empty frequently. Refills hold fewer diapers than competitor.

Comments: Tommee Tippee is, of course, usually thought of when your baby is ready for a big kid cup, but the company has expanded their offerings to include baby bottles and accessories, bibs and toddler feeding accessories, and now diaper disposal. The Tommee Tippee Simplee ($25) borrows the deodorized plastic liner idea from the Diaper Genie, with a few differences.

Parents overall liked the Simplee although some would like to have a step on lever, which you’ll find on the Diaper Genie Complete–the lid can be hard to use. As with every odor-controlling diaper pail we’ve reviewed, the smell eventually seems to over come the deodorized plastic after several months.