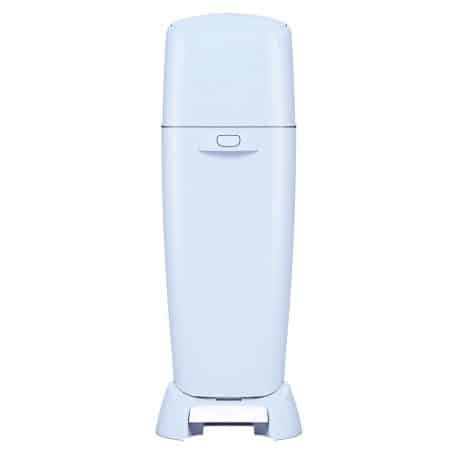 Cons: Expensive, since you have to keep buying those refills.

Comments:  Diaper Genie was the original “odor free” diaper pail with plastic refills. The pail has been through a few iterations over the years with most recent being the Diaper Genie Essentials  ($20 with 100 refills), the Diaper Genie Expressions ($25) and the Diaper Genie Complete ($30; pictured; available in five colors). Basically when using any of these models, diapers go in the top past a clamp which keeps the diapers (and the smell) inside the container (called the AIR-TITE system). A plus over past Genies: Playtex actually designed a cutter that, well, cuts the plastic liner so you can easily remove the dirty diapers.

So what’s the difference between models? The Diaper Genie Essentials has a one-hand design with the AIR-TITE system and a special PUSH-N-Lock clamp to keep odors under control. It holds up to 34 newborn size diapers. The Complete adds a food pedal, a taller design and built in carbon filter. The Expressions version has a customizable exterior, is wider and holds up to 50 newborn size diapers. All three versions use the same refills (in case you find an older versions of the Diaper Genie at a garage sale, they use different refills that are still sold in some stores).

The Expressions versions allow you to choose from five different colors/patterns to match your nursery decor.

So let’s get down to brass tacks: how well does the Genie do on keeping out the stink? Very well, in our opinion. Much better than the trash-bag alternatives out there (Baby Trend) and the steel pails (Ubbi).

That doesn’t mean the Genie doesn’t have its detractors, many of whom cite the cost of refill cartridges as a major negative. With frequent emptying, a minority of parents claim trash-bag diaper pails can work for a while. That is debatable, but others object to the process of putting a diaper in the Genie, which requires pushing it below a clamp (ew, we know).

FYI: Between the three pails, the Genie Essentials somewhat better marks from readers than the Complete. While there is no such thing as a stink-free diaper pail, the Diaper Genie Essentials is as close as it gets today.