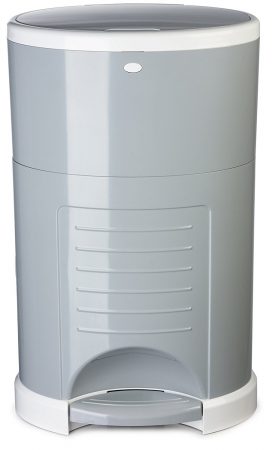 Pros: Hands free operation—you hit the foot pedal and drop in a diaper. Comes in three sizes, largest can holds 5+ days of diapers. Converts to a regular trashcan after baby is done with diapers. Parents say it is much easier to use than the Diaper Genie.

Cons: “Biodegradable” refills are terrible at containing stink, readers report. Hinges on the “trap door” seem prone to breakage, as does the foot pedal.

Comments: The only serious competition for the Diaper Genie, the Diaper Dekor comes in three sizes: Mini ($25 , holds 25 diapers), Classic ($30, 40 newborn diapers), Plus ($36, 60 newborn diapers). And each pail has different refills with two options (regular or biodegradable). Refills run about $15 for a two-pack that wraps about 1100 diapers. (1100!)  Be careful which size inserts you buy: the Classic size won’t fit in a Plus can.

As you might guess, the Mini is designed for lighter use (grandma’s house?) while the bigger Plus version is pitched to folks who want to do less frequent emptying of the pail. And the Plus is available in designer colors for a bit more than the white.

Of all the models, the Plus is most popular—but all the Dekors get generally good marks from readers. No diaper pail can completely seal out the stink and the Dekor’s critics (about one in four folks who buy it) say the Diaper Genie works better. But the majority of readers are happy with the Dekor.

As for the refills, the regular ones work better at holding back the stink than the biodegradable, in our opinion based on reader feedback.

Rating: A (original refills only)