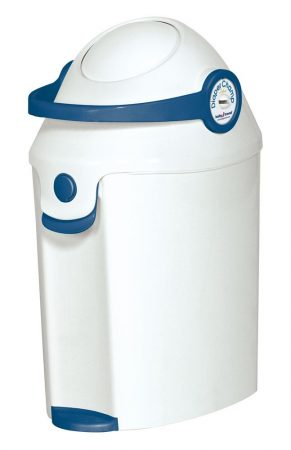 Pros: Did we mention no expensive refills? The Diaper Champ Deluxe uses regular ol’ kitchen bags, yet the contraption works to seal out odor by using a flip handle design. Easy to use. Taller design means it holds more diapers than the Genie. They do sell their own refill bags with “multiple layer odor protection,” but we say skip their bags and stick with trash bags.

Cons: Not as stink-free as the Genie or Dekor, especially when baby starts solid foods. Bigger footprint than other pails.

Comments: When you redesign a best-selling product, you’re supposed to improve it, right? Yes, unless you are Baby Trend, a brand that seems to botch even the simplest task. Fans loved the original Diaper Champ, which started the concept of using regular kitchen trash bags (and hence, saved hundreds of dollars in refill cartridges). The most recent version of Diaper Champ, unfortunately, is a step backwards: yes it has a wider opening, but parents tell us it doesn’t work as well (diapers get stuck, the smell can be atrocious, etc). And the diaper removal process may require an EPA HazMat Rapid Response team, given the stink level.

Fans of this diaper pail seem to like it . . . until their baby starts solid foods. Then the smell can be overwhelming, forcing folks to buy a Dekor or Genie. One tip: if you go with the Champ, put a fabric softener sheet in the pail with each load (this cuts down on the smell). And be prepared to scrub it every month or two with bleach, leaving it outside to air out. Also the Champ probably isn’t the best bet if you have an older toddler, who can put toys into the slot (trust us, not a pretty sight).

Diaper Champ Deluxe pails are now available in four different colors: white with gray, white with blue, gray with white and white with pink. Gray appears to be most popular and sells for as much as $5 more than the white with blue version.

Baby Trend is offering Odor Grabber refills ($20) that can be used in any diaper pail on the market: Diaper Genie, Diaper Dekor and more. Bottom line: A mixed review: good for the first few months, not so good after baby starts solid food. A bargain—but beware the stink trade-offs.