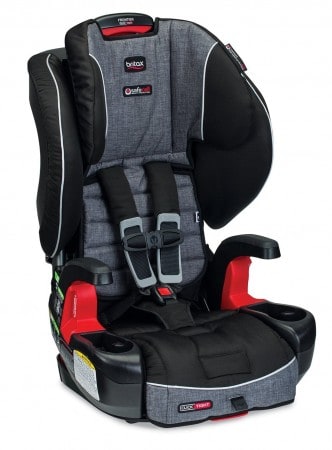 This seat has been discontinued and replaced by the Britax Grow With You ClickTight Plus. Below is an archived review.

Pros: 25 to 90 lbs. with five-point harness. A bit wider, deeper than the Graco Nautilus.

Britax has steadily improved this seat over the years. Overall weight and height limits have moved higher and there are a series of small enhancements (example: the cup holders are inset in the seat, rather than stick out from the side, etc.). The Frontier ClickTight (G1.1 is the most recent version) also has:

• SafeCell crash protection in base. Seen in Britax’s other models, this system absorbs energy in a crash.

• Higher top harness adjustment. The top harness slot is now 20.5″, which is the tallest in the industry. That will keep kids from outgrowing the seat in harness mode too soon. Other small improvements to the seat include a better recline feature and now the harness hides away when you convert the seat to booster mode (before it had to be removed completely).

Are there any negatives to this seat? Well, just as before, this is a big, bulky seat. Carrying it through an airport isn’t going to be fun (the Frontier is certified for use in an airplane, but only with its five-point harness—not as a booster). Some parents have difficulty tightening the straps depending on the type of rear seats they have (captains seats are easier).

The Frontier is 19.5” wide—that means fitting three across in a carpool won’t be easy for most vehicles. Also: the Frontier has limited recline settings and that might be a negative for some.

As for third party ratings, the Frontier earns a Best Bet (booster mode) from the Insurance Institute for Highway Safety (IIHS) and high marks for ease of use from the NHTSA. Our readers generally agree as do other online reviewers: the Frontier earns an impressive 92% positive rating (four and five stars) from Amazon. A few dissenters say the seat isn’t comfortable and point to the hard plastic areas under the armrests. This is probably a valid point—Britax could cover and pad this part of the seat.

The price of the Frontier is perhaps its biggest draw-back—the similar Graco Nautilus is about HALF the price. And the Graco Nautilus has an extra use as a backless booster (the Frontier only works as a belt-positioning, high back booster). That said, the Britax Frontier is an excellent seat and is highly recommended.