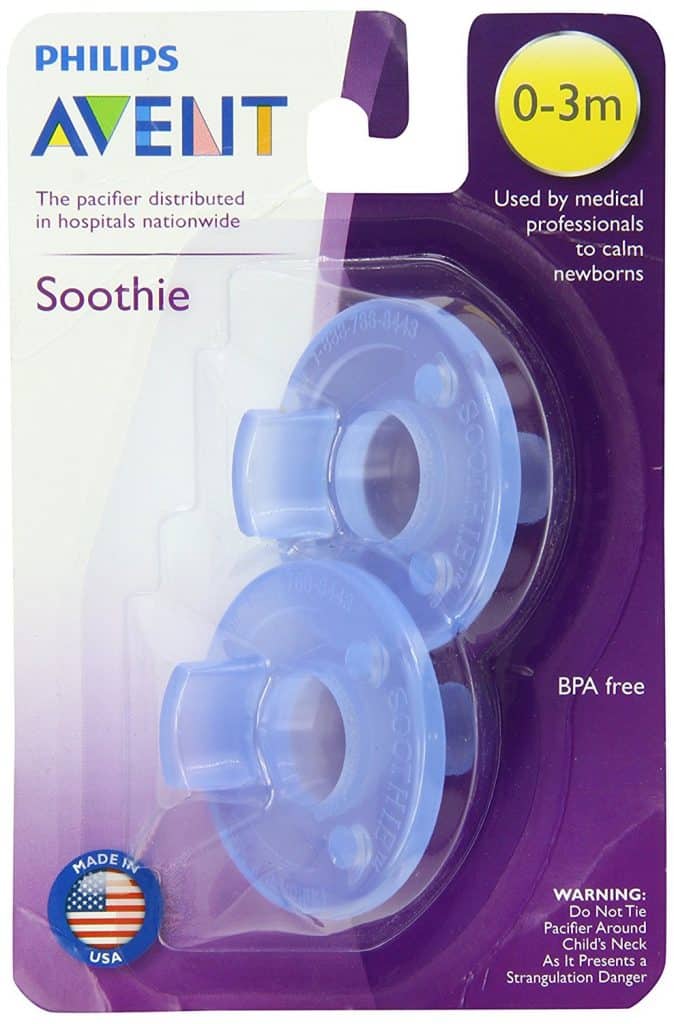 New to pacifier shopping? Read our 7 Things No One Tells You About Buying a Pacifier for advice and tips.

The best pacifier should mimic a human nipple, so as not to interfere with breastfeeding. They should also be easy to clean. Because pacifiers have been implicated in recent safety recalls, we look for pacifiers made by reputable brands that have a solid track record in this category.

The Soothie hits all the right notes: it works well for newborns and young infants trying to establish breastfeeding as well as for older babies to provide some protection against SIDS (Sudden Infant Death Syndrome; see below how pacifiers work against SIDS).

Basically, pacifiers come in two types: one-piece construction with a straight nipple and three-piece construction with a molded orthodontic nipple. Soothies are the most popular one-piece option on the market, based on our surveys of readers and lactation consultants. Made of sturdy, hospital-grade silicone with no latex or BPA, you can sterilize Soothies or put them in the dishwasher. If you have a newborn, you’ll want to buy the 0 to 3 month Soothies; once your baby reaches three months, move up to the 3+ month version.

Soothies are made by Philips Avent, which has a solid safety track record in this category. The brand has no safety recalls for pacifiers in the past 10 years.

Over 2000 U.S. hospitals hand out Soothies to parents of newborns. Our readers generally praise Soothies as excellent pacifiers, but a handful of parents said their babies did not like the Soothie’s straight nipple. In those cases, these readers found orthodontic-style pacifiers by Nuk or MAM worked better for their babies. 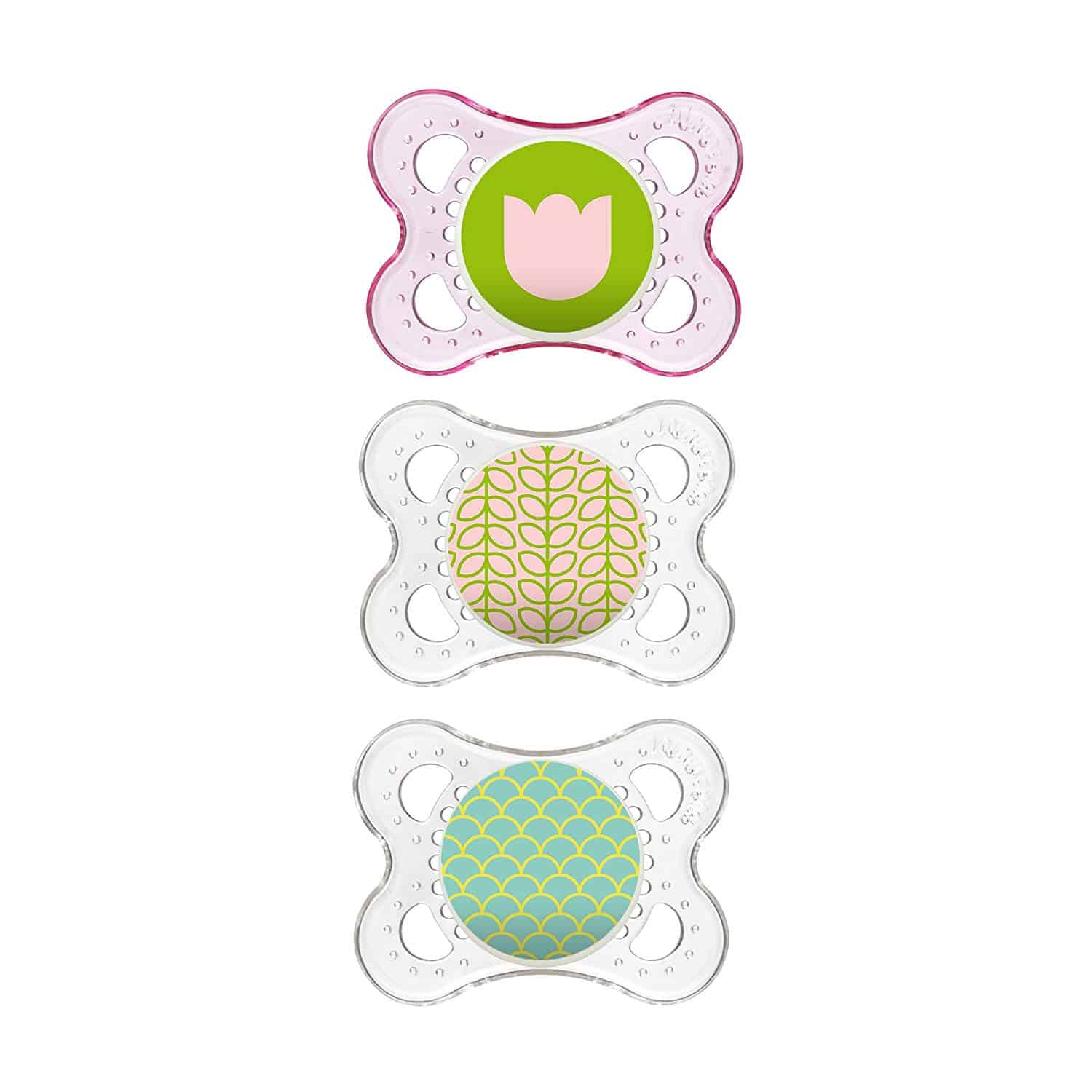 As a runner-up best pacifier, we like MAM. These pacifiers have an orthodontic nipple made of silicone and a plastic, perforated mouth guard. Some even glow-in-the-dark!

Also Great: MAM pacifiers. If Soothies aren’t cutting it with your baby (yes, a minority of babies don’t like them), consider an orthodontic pacifier like our runner up, MAM. These two-piece pacifiers include a BPA-free silicone nipple, plastic mouth guard with air circulation holes and a carry case. Price:

Amazon Auto Links: InvalidParameterValue: The ItemId B00A282SGO provided in the request is invalid.

for a two pack.

MAM’s orthodontic nipple is best for older babies who have well established breast feeding habits (or are bottle feeders). FYI: MAM pacifiers can cause oral development issues if babies suck on them upside down, so make sure your baby has it in her mouth correctly. 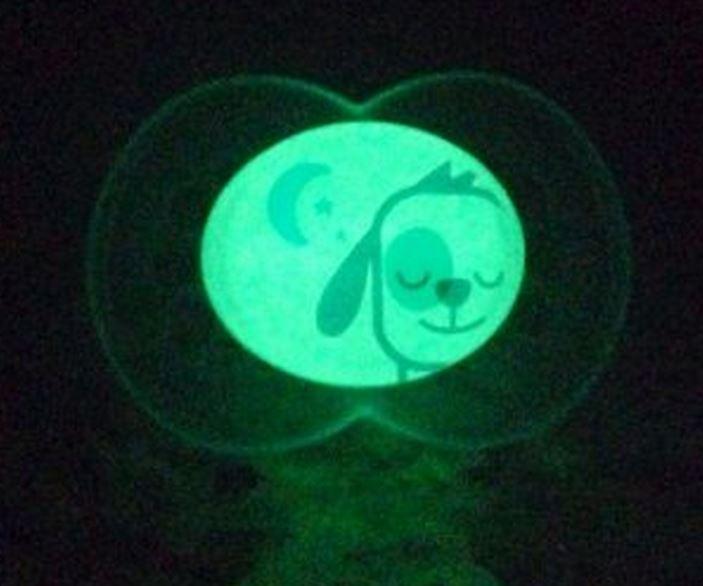 MAM’s Glow in the Dark Night Orthodontic pacifier charges in the sun during the day so you can find it in the middle of the night with the lights off.

MAM has a loyal following of parents who swear by these pacifiers. They like the small sized guard, light weight and multitude of cute colors and patterns. Many mentioned they love the glow in the dark version (see picture)–they can find them in the middle of the night without turning on a light. One reader noted that her baby only wanted to suck on her finger to be soothed, but once he tried the MAM, she was freed from that duty.

Critics of MAM pacifiers say they are too small and rather expensive.

Despite these criticisms, we think MAM pacifiers are a great option for infants who are not breastfeeding and older babies with well established breastfeeding habits. Yes, they cost a bit more, but most parents say they’re worth it.

We’ve been rating and reviewing baby products like pacifiers since 1994. In addition to hands on inspections of pacifiers, we have also interviewed pediatrician and pediatric dentists. We also evaluate consumer reviews posted on sites like Amazon, as well as our own message boards. Here’s another key point: we don’t take money from the brands we review. No free samples, no sponsors, no “partnerships.” Baby Bargains is your independent and unbiased source for expert baby gear reviews. We’ve been writing and reviewing baby gear since 1994. Yes, that long! 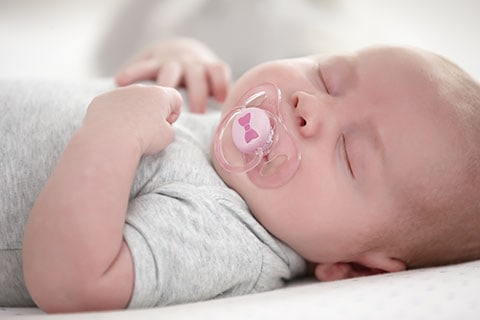 We evaluate pacifiers with in-depth inspections, checking models for safety and quality. We interview experts like pediatricians, lactation consultants and pediatric dentists to get expert advice on the best pacifiers that won’t interfere with breastfeeding or cause dental problems. We also gather significant reader feedback (our book, Baby Bargains has over 1 million copies in print), tracking pacifiers on durability baby preference. Besides interviewing parents, we also regularly talk with retailers of nursery products to see which brands are most trustworthy and other key quality metrics.

7 Things No One Tells You About Buying A Pacifier!

1. Wait till breastfeeding is well established (at least four to seven days) before introducing a pacifier.

Lactation consultants tell us you don’t want to confuse a newborn with a pacifier, so skip the pacifier for at least four days after birth while you try to establish good breastfeeding habits. If you’ve never breastfed before, you may not realize that it can be rather difficult at first. Breastfeeding may be a natural process, but it requires some skills on both your and your baby’s part. So don’t set yourself up for failure by confusing your baby with a pacifier at the outset. Don’t worry, babies will still take that paci later.

2. Pacifiers can offer some protection against SIDS for the first six months to one year of life.

According to our in-house pediatrician and co-author of Baby 411, Dr. Ari Brown, pacifiers can greatly reduce the risk of Sudden Infant Death Syndrome (SIDS). A variety of studies, including a metadata study that looked at seven independent studies and results, have concluded that pacifiers can reduce the risk of SIDS “particularly when placed for sleep.” Check out that study here.

3. Get rid of pacifiers early. 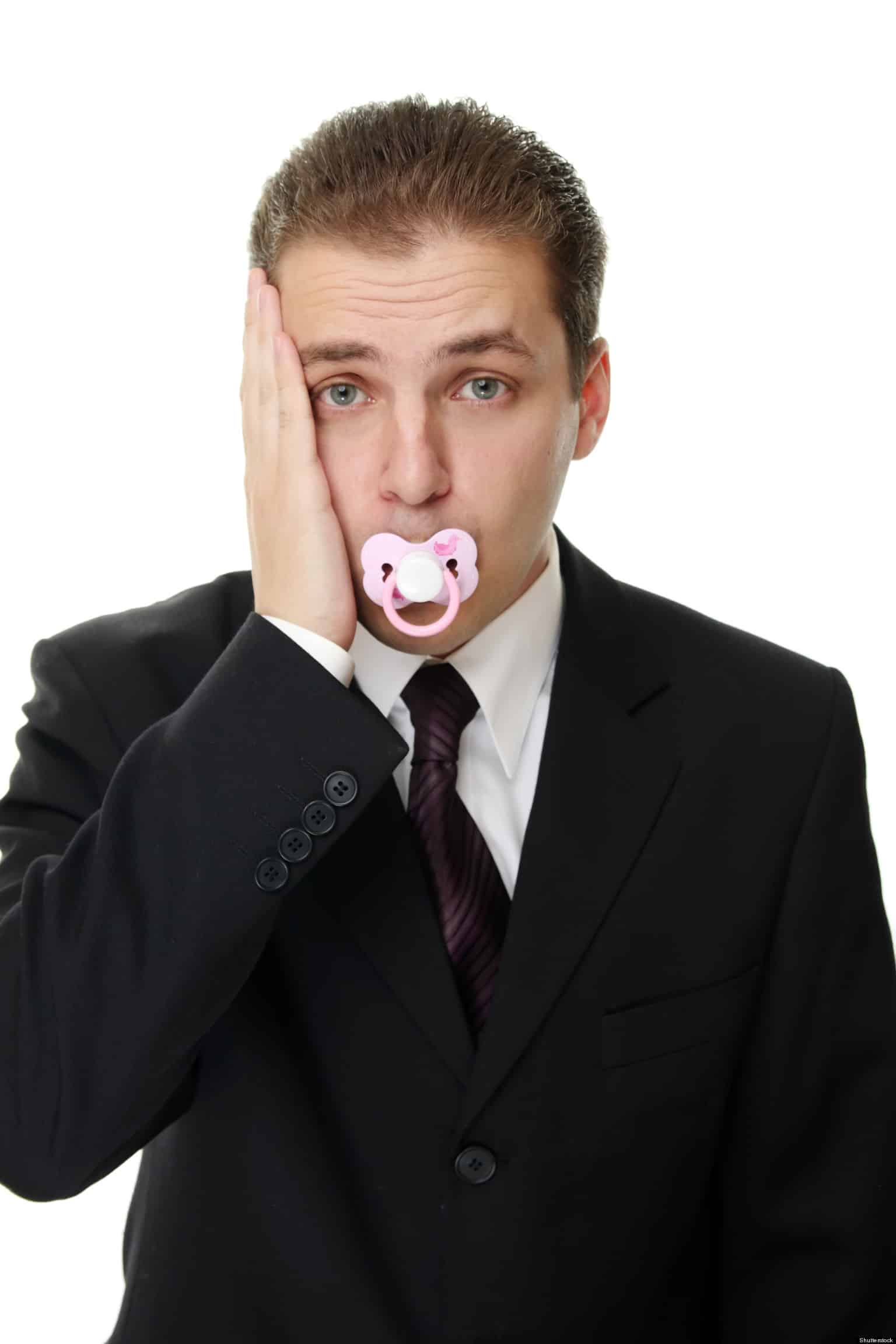 Pediatricians, the American Academy of Pediatrics and pediatric dentists all agree: get rid of the pacifier by one year of age at the latest. The risk for SIDS is greatest during the first six months of life, with the chances trailing off after a baby is one of year age. Why get rid of a pacifier after your baby turns one if your baby loves it? Let’s talk about that next.

Your baby needs to delay language skills sooner than you think. Pacifier use after one year of age can cause speech delays. Although research on this subject is inconclusive, babies with pacifiers tend to grunt and point more to communicate—and some can miss speech or language developmental milestones, according to pediatricians we interviewed.

What about damage to teeth or your baby’s jaw? Studies show pacifier use after age two can cause orthodontic problems. And that can mean a big orthodontist bill down the road. Bottom line: give up the pacifier BEFORE one year of age.

5. Extended use of pacifiers can lead to ear infections. 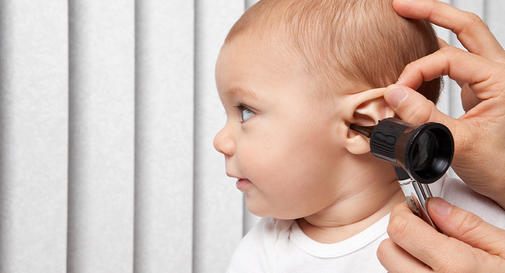 According to Dr. Ari Brown, co-author of Baby 411 and a practicing pediatrician: “. . . pacifiers are a known risk factor for ear infections.” Our advice: use pacifiers at nap and bedtimes only for the first six months to a year. Give up the pacifier BEFORE your baby turns one.

Orthodontic pacifiers like those made by NUK and MAM have an up side and a down side. See below for examples. Don’t allow your baby to use her orthodontic paci upside down, which leads baby to chew the pacifier. Then, when you’re breastfeeding, he just might start chewing on you! Ouch! You can tell up from down by either the pattern on the pacifier or by the notch some paci’s have on the top. 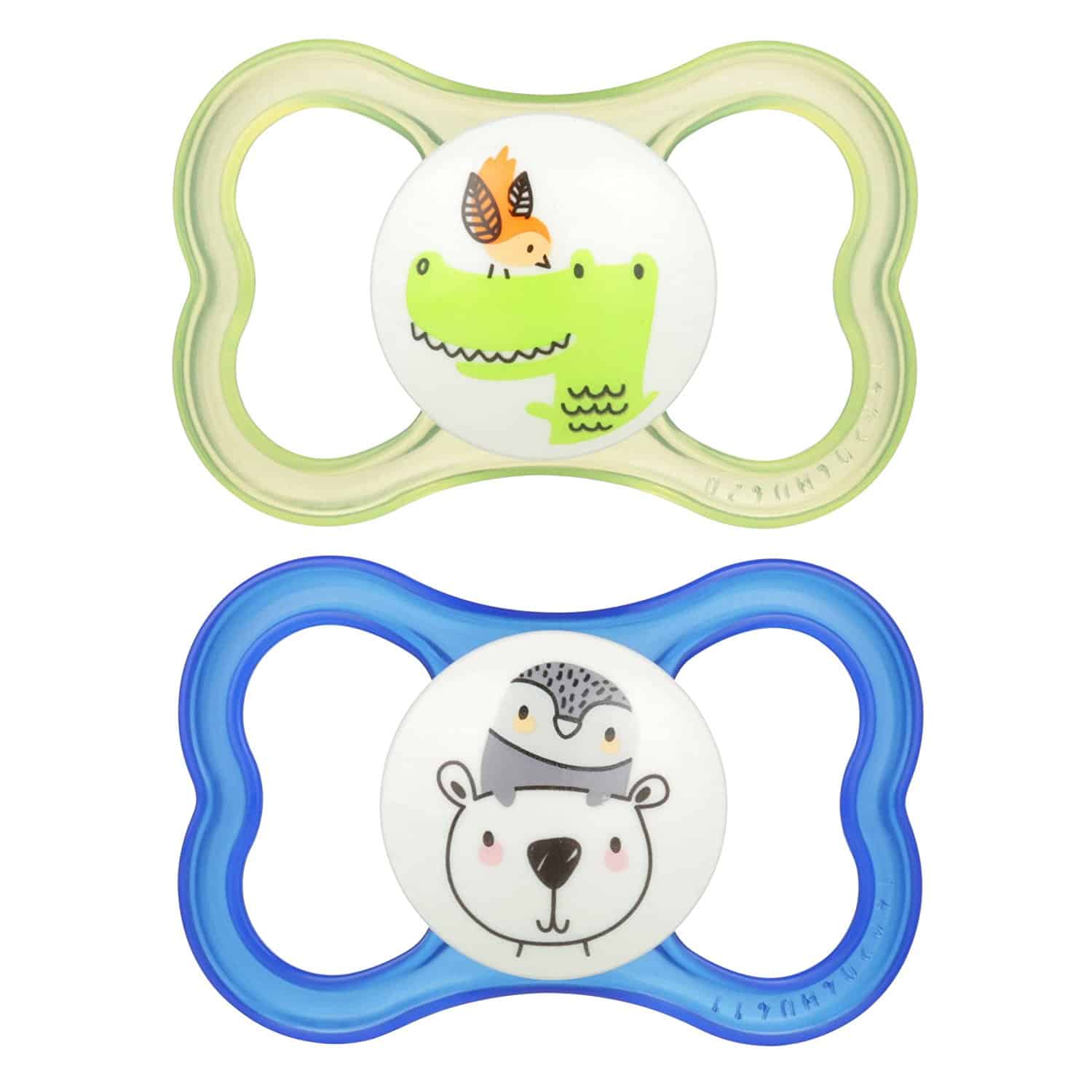 MAM pacifiers usually have pictures on their exterior button so you can see which way is up. Another clue: the tip of the nipple should point slightly upward to the top of baby’s mouth.

NUK has a curved upper edge to fit under baby’s nose. This notch helps you figure out which way is up.

7. It’s easier to break a pacifier habit than a thumb or finger sucking habit.

Throughout this whole discussion, you may have been thinking: “I hope my baby just sucks his thumb. That’s so much easier than worrying that the binky will fall out in the middle of the night.”

Yes, but . . . you knew there was a “but.” Pediatric dentists note that getting rid of the paci is a lot easier than stopping thumb sucking. After all, baby has her thumb all the time. But a binky can be “lost” when you want to get rid of it.

Children who continue to use a pacifier or such a thumb past two years of age risk serious damage to their teeth. Expensive orthodontia may be required, and in some severe cases, surgery.

Talk to your pediatrician if you have a child addicted to thumb or finger sucking for comfort and stress relief. They have tried and true methods to help your child stop without traumatizing her.