The struggle is real—screens and eye strain. We tested 15 different pairs of glasses that promise to block blue light. Research shows that blue blocking lenses are an effective way to get better sleep if used at night before bed. What about headaches and dry eyes? The jury is out on those, but blue blockers do help provide relief for some folks. If you'd like to give it a try, here are our picks.

FYI: We don't take money or freebies from brands we review. As product reviewers, we are 100% reader supported! 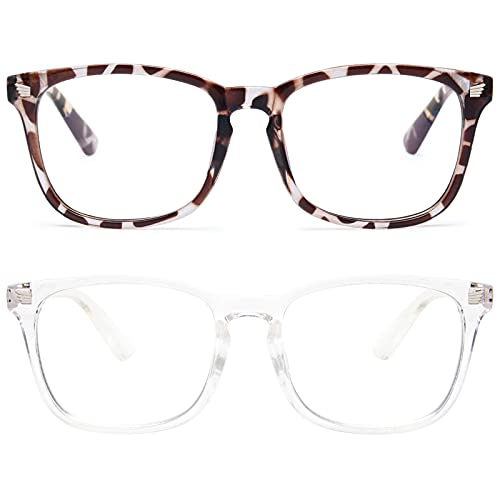 Affordable, worked well
You don't have to spend a fortune on blue blocking glasses—this choice worked well. We liked the clear lenses, UV ray protection and the lack of polarization. Caveat: large size frames may not fit smaller faces well.
$13.58

Let’s talk about the science behind glasses that block blue light. Research shows that blue blocker lenses are helpful for better sleep if used at night before bed. Excessive blue light during the night interrupts the body’s circadian rhythm.

The Harvard University Health Letter explained the science in an article updated in 2018:

Harvard researchers and their colleagues conducted an experiment comparing the effects of 6.5 hours of exposure to blue light to exposure to green light of comparable brightness. The blue light suppressed melatonin for about twice as long as the green light and shifted circadian rhythms by twice as much (3 hours vs. 1.5 hours).

In another study of blue light, researchers at the University of Toronto compared the melatonin levels of people exposed to bright indoor light who were wearing blue-light–blocking goggles to people exposed to regular dim light without wearing goggles.

The fact that the levels of the hormone were about the same in the two groups strengthens the hypothesis that blue light is a potent suppressor of melatonin. It also suggests that shift workers and night owls could perhaps protect themselves if they wore eyewear that blocks blue light. Inexpensive sunglasses with orange-tinted lenses block blue light, but they also block other colors, so they’re not suitable for use indoors at night.

So science points to using blue light blocking glasses at night. What evidence do these glasses work to reduce eye strain, headaches and dry eye during the day?

The research on eye strain isn’t quite there yet—but some folks do report blue light blocking glasses help with these issues during the day, especially if you stare at a screen for many hours.

Bottom line: if you’re buying blue blocker lenses, they should be used at night when working on your computer, checking your cell phone or watching television to help people sleep better. We recommend not using these glasses during the day—that’s because blue light helps folks stay more alert and improves memory and cognition.

• Affordable, yet effective. If you want to try out blue light blocking glasses without spending a fortune, these are a good starting point.

• Clear lenses. Some blue light blocking glasses have a yellow tint; these are clear.

• Large frame size may not work well on smaller faces.

• Plastic frames aren’t designed for longevity. But that’s the trade-off at this price level. We think they still were effective, however. 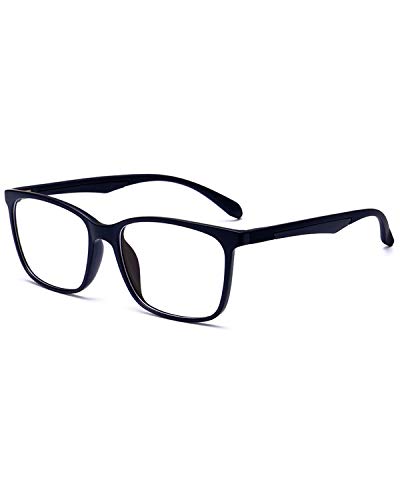 Lightweight, includes case
Loved these no-nonsense glasses, which performed well. But they have a slight yellow tint and smudge easily. Still a good deal, though.
$25.95

• Block 90% of blue light—that’s just about right for most folks!

• Smudges too easily. For some reason, these glasses attract dust and smudges easier than others we tested.

• Slight yellow tint. Some folks don’t like looking through tinted glasses. We realize there is only a slight tint here, but just a heads up! 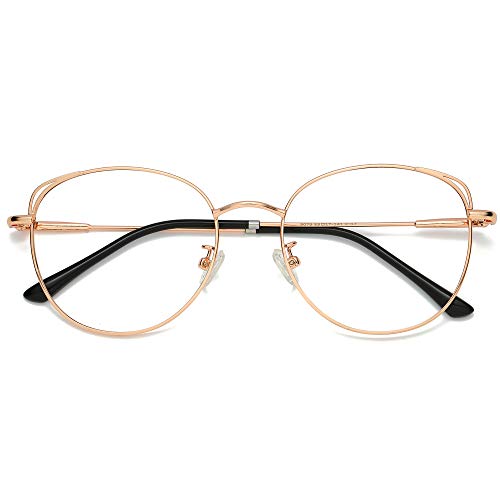 Let’s be honest: most blue light blocking glasses aren’t exactly the height of fashion. That’s why we were excited to test SOJO’s gold tone wire frame glasses—they were both cute and effective. If you don’t like gold, these glasses also come in black and black/silver metal frames.

• Adjustable temples—most glasses we tested didn’t have that.

• Large-size frame may not fit small faces well. Some folks like this, but we can see how others might think they are too big. 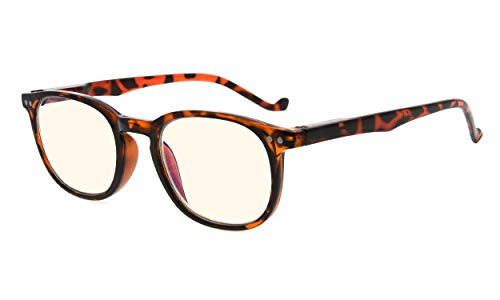 Affordable blue-blocking readers, 20 colors
We loved how you could choose the level of blue light blocking with these reading glasses: 60%, 90% or 100%. Lightweight, comfortable and affordable. Caveat: too much glare, say some.

If you are of a certain age, you may find you need both reading glasses that magnify text and blue blocking lenses. After trying out a few different options, we liked Eyekepper’s blue light filter reading glasses as the best bet. Here’s why:

• 20 colors with magnification from 0 to 4.0. We liked all the color choices. We tested a tortoise shell and thought they worked (and looked) nice.

• More blue light blocking = more yellow tint. This didn’t both us, but we can see why the yellow tint would annoy.

• Glare. We didn’t have a problem with glare when we tested these reading glasses, but we see reports that others complained of glare when looking at a bright computer screen. (You can turn down your screen brightness to deal with the glare, of course).

We do hands-on testing—we buy the products with our own money and evaluate with an eye toward safety, ease of use and affordability.

Here’s another key point: we don’t take money from the brands we review. No free samples, no sponsors, no “partnerships.” We are 100% reader supported.