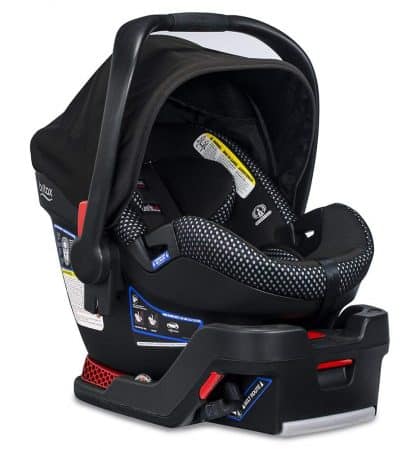 Comments: Britax struggled for years in the infant car seat category. So the company went back to the drawing board and created the Britax B-SAFE 35 (and Endeavors). This one is a winner and is also compatible with Britax’s latest generation of improved strollers (including the B-Agile).

Britax infant seats: an overview of the models

The big headline on the B-SAFE 35 is Britax’s improved crash protection (which Britax calls SafeCell, a system seen on its convertible seats). The seat features a deep shell that is lined with EPP foam for additional protection in side impact crashes. The basic B-SAFE 35 has two crotch strap positions and four harness heights (sorry, you have to manually rethread the harness to change the harness height on the B-SAFE 35 model).

One of the B-SAFE’s key features is a “removable comfort pillow” that better fits smaller newborns and preemies (as small as four lbs.). The adjustable base has five positions plus built-in lock-offs to help with belt installation. You also get premium LATCH connectors and an excellent over-size canopy.

How is the B-SAFE 35 Elite different? This models adds additional side impact protection and a no-rethread harness (Quick-Adjust).  The Elite also has an easier to remove cover for cleaning (hand washing only, unfortunately).

FYI: In coming months, the Britax B-SAFE Elite will not be sold as a stand-alone car seat; instead it will only be sold as part of Britax travel systems, which pair a stroller and car seat.

Recently, Britax created a new seat based on the the B-SAFE 35 Elite called the Britax Endeavours. The difference: the Endeavours adds an anti-rebound bar and an easier European-style belt-routing path for installations without a base (such as in an Uber). Price: $319.89.

In 2018, Britax added a fourth version to its line-up: the B-SAFE Ultra Cool Flow (). This seat is basically the Endeavors minus the anti-rebound bar but with Ultra Cool Flow mesh fabric.

So what’s not to like about the B-SAFE seats? We’ve seen scattered reports from parents who say their babies outgrew their B-SAFE’s too quickly . . . the deep and narrow seat was too tight for bigger babies. We wonder if the seat criticisms are the flip side of the enhanced side impact protection—Britax’s B-Safe 35 Elite looks more narrow because it is deeper than comparable seats and the head wings (side impact protection) make it look narrower. But here are the specs: the 35 Elite is 16″ deep (compare that to the Chicco KeyFit’s 14.5″ depth) and 9″ wide (versus Chicco’s 9.75″).

So, yes, the Britax seat is 7.6% narrower than the KeyFit, but visually it seems more confining than the specs indicate. Yes, we can see how babies that are at the top of the weight/height chart might outgrow the seat well before they hit 35 pounds. But that’s probably the exception.

Other negatives: the B-SAFE seats lack anti-rebound bars or load legs seen on other premium seats. They’ve corrected this with the Endeavours, but the other seats in the line still don’t have a standard anti-rebound bar.

Another complaint: the 35 Elite harness buckle always seems to fall back into the seat when you are putting a baby in. This isn’t fun, since you have to fish out the buckle underneath a baby’s bum every time you use it! Again, we think the deeper seat depth plays a role here. (Britax could add buckle holders on the side of the seat to remedy this issue; that would be a nice future improvement).

Despite these complaints, real world feedback on the B-SAFE line has been generally positive. Most parents praise the seats as easy to install and use; the quality is excellent.

One major consideration for this seat: stroller compatibility. If you are getting a Britax stroller, then the B-SAFE would be a no-brainer. As for compatibility with other strollers, well, that’s going to be hit and miss (mostly miss). Fewer strollers are compatible with Britax’s infant seat, compared with Graco and Chicco.

Bottom line: the Britax B-SAFE infant seats are excellent; between the four versions, we’d go for the Ultra given the easier belt path for installs in Ubers, enhanced side impact protection and easier to remove cover. If you can afford the upgrade to the Endeavours, we think the extra money for the anti-rebound bar is worth it.

FYI: With Britax’s recent purchase of BOB strollers, Britax has rolled out a version of this car seat that matches the fabric on the BOB strollers: the BOB B-SAFE 35 is exactly the same as the Britax B-SAFE 35, just different fabrics.