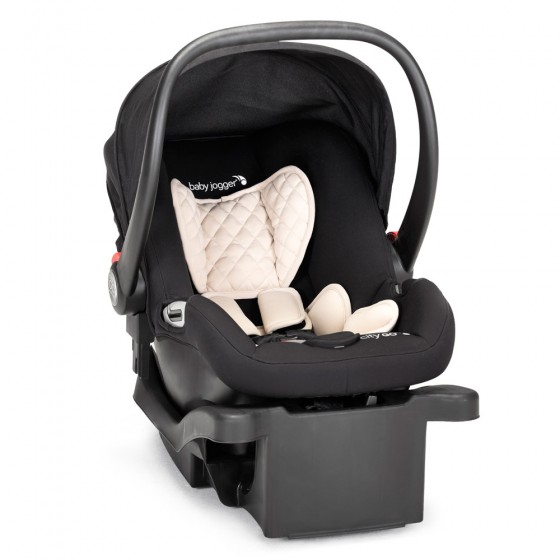 Pros: Based on the well regarded Graco SnugRide 35 LX, no rethread harness, six position recline base. Good safety and ease of use. City GO2 has a new base and anti-rebound bar. It’s too new for much feedback on it yet.

Comments: Infant Car Seat: Baby Jogger City GO. The Baby Jogger City GO infant car seat is based on the excellent Graco SnugRide 35 LX . . . it uses that seat’s shell, but the base is all new, with six position recline. The City GO features a height adjustable headrest, no rethread harness, ergonomic handle with molded grip, premium LATCH connectors—basically, all that you’d expect from Graco.

And yes, there is a large, three-panel canopy that offers 50 SPF protection.

Baby Jogger has released a new version of the City GO called the City GO2, although it is only available on their website at the time of this writing. (The original City GO is still available online.) Priced at $290, the GO2 has a new base called the RAPIDLOCK, which the company claims allows for quick installs using a “belt-tensioning technology.” They’ve also added an anti-rebound bar.

For added convenience, the GO2 can be used on any Baby Jogger stroller without any adapters, and has a new “quiet canopy.” The base only has four recline positions–the City GO has six. But who really needs six reclines anyway?

Our view: What is the real world feedback on the Baby Jogger City GO? So far, so good. As we’d expect for a seat based on the Graco SnugRide 35 LX (which is still on sale as of this writing for $40 less than the City Go), readers generally say it is easy to use and adjust. The City GO2 is too new for any feedback yet.

A few dissenters claim that while the seat has a no-rethread harness, you still need to turn the seat upside down to adjust the harness. Our other top recommended seats require no such gymnastics. Another criticism: the Graco-like canopy requires too hands to adjust—and makes a loud clock while adjusting (waking baby). While the canopy fabric matches the Baby Jogger’s City Select, it is somewhat noisy and bulky when you adjust the canopy.

Finally, you see the above picture of how the seat looks, right? Here’s how it looks in the real world: 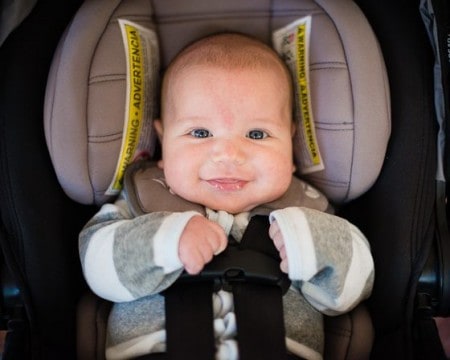 Notice those giant warning labels on either side of the baby’s headrest? That’s something Baby Jogger omits from its product shots of the City Go. Those warning labels irked more than a few parents, since so many pictures are taken with baby in the infant car seat.

We’re guessing safety regulators or Graco’s lawyers ordered the warnings in that position, but it’s bait and switch (in our opinion) to show the seat sans labels as it appears on numerous web sites.

These are somewhat minor quibbles, but when you cross this price point in infant car seats, folks justifiably have higher expectations.