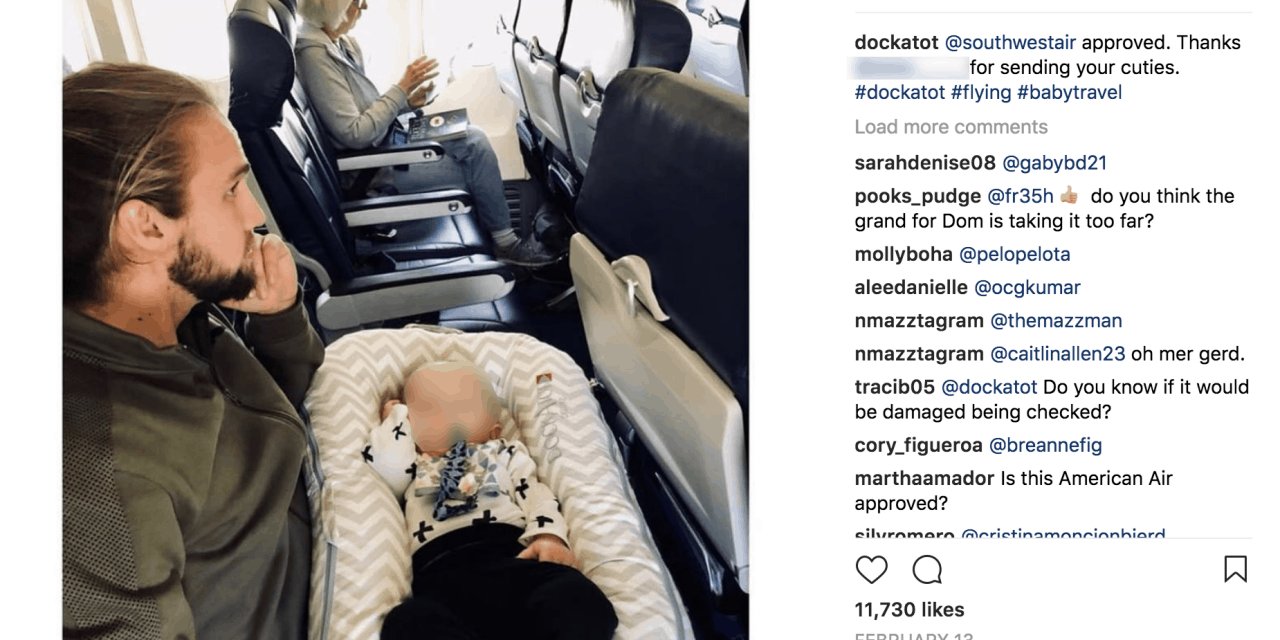 In a February 2018 post to its Instagram account with over 400,000 followers, DockATot claimed that it is “@southwestair approved” along with a picture of the DockATot apparently used on a Southwest airplane: 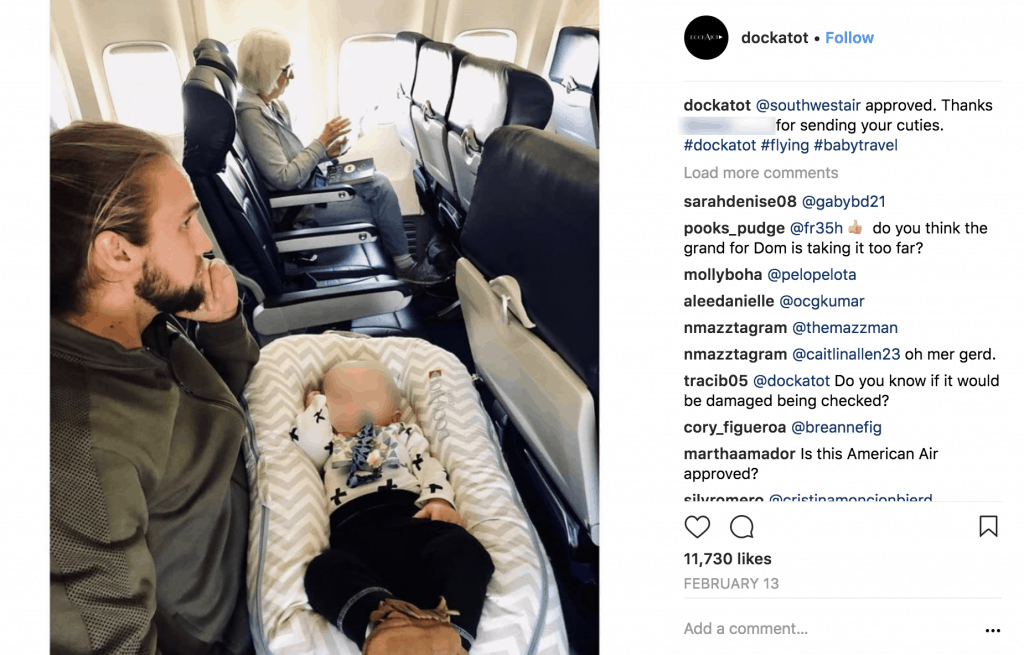 We reached out to Southwest Airlines to confirm that the DockATot is approved for use on their aircraft.

We reached out to DockATot’s spokesperson for response but didn’t receive a response by our press deadline. We will update this post when we hear back.

With family summer travel season underway, parents will be taking to the skies with their infant lap children. We asked child passenger safety expert Alisa Baer, known online as the Car Seat Lady, for her thoughts on using infant loungers on airplanes.

“The safest place for an infant on a plane is in an FAA-approved car seat,” Dr. Baer said in a phone interview. Dr.Baer pointed out that the FAA has jurisdiction over all products used on a plane during take-off, landing and turbulence. During a search of an FAA database, we couldn’t find any mention that the DockATot is FAA-approved. (Read more of Dr. Baer’s recommendations for airline travel safety for infants here).

DockATot’s post also pictures the product being used on an aisle. It is against FAA regulations to use a car seat on the aisle and recent research shows an increased risk to babies and toddlers seated there (burns, pinched fingers and other injuries.)

This isn’t the first time DockATot’s social media has embroiled the company in controversy. In a detailed review posted last year, we documented how social media postings for DockATot show the product used in ways that even its own safety instructions say is dangerous.

Update: June 4: After we published this article, we heard from Southwest Airlines to explain some of their thinking on the DockATot:

“Since this doesn’t attach to a seat or get used as a car seat, we’d likely have to consider it an infant carrier, which our FAA-approved Flight Attendant manual requires to be stowed during taxi, takeoff, and landing,” said Southwest spokesperson Thais Hanson. “It would also be counted as a carryon item.”

During the cruise portion of the flight, a parent would be permitted to use a DockATot . . . but that’s true for just about any infant carrier, blanket, etc.

Another wrinkle: because the DockATot is 24″ width and Southwest seats are about 17″, the DockATot would spill on to an adjacent seat. “If the seat next to the person using it is occupied, we would not allow it; however, if an adjacent seat is empty, we could possibly accommodate during the cruise portion of flight.”

Meanwhile, DockATot’s own fans blasted the company for its suggestion to use it in flight instead of a car seat. Here are a handful of comments posted to DockATot’s Instagram:

“This is extremely unsafe and is even more dangerous than just have a lap infant. If this parent didn’t have the pillow, he’s at least be HOLDING his child. The pillow is allowing him to not even have to have a hand in the baby.”

“I’m a huge advocate for using car seats on a plane for babies and toddlers. So i hate seeing things like this.”

A flight attendant commented: “Unnecessary risks that don’t need to be promoted. Half the people on this post think this is a genius idea. I’ve seen, and have experienced injuries due to unexpected turbulence. Glad the other half of mamas are also trying to shut it down.”

“We love ours at home, but there’s no way this is safe for travel. Buy a seat on the plane for your baby and put them in their carseat.”

“What @dockatot is promoting is extremely unsafe. Just because it’s an option to parents, absolutely does not make it a safe one for kids.”

“Omg so incredibly unsafe! This really needs to stop being promoted.”

Despite the flood of negative comments, DockATot still has this picture on their Instagram as of today.