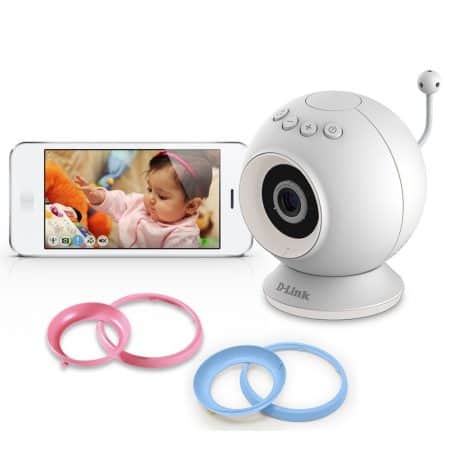 2019 update: D-Link appears to have discontinued all their baby monitors after several researchers found security vulnerabilities that might enable someone to hack the video. Below is an archived review of D-Link monitors, which are still being sold online. We would not recommend this brand.

$189.28), which aims to compete against Nest and other streaming cameras a run for the money.

The more expensive (720p) versions of the D-Link monitor feature a temperature sensor that turns a LED on top of the monitor from blue (too cold) to red (too hot) to green (just right). All models feature lullabies.

Like other “supply-your-own-device” baby cams, you stream video from the D-link to your smartphone or tablet via their mydlink Baby app. For the monitors with a SD card slot, you can record videos and then stream them back to your mobile device . . . or at least that is the promise.

Parent reviews of this monitor have been mixed. Set-up is an issue—more than one parent said pairing this monitor with their Wi-Fi network was a challenge. This is a common problem with Wi-Fi monitors . . . and why Nest’s simple set-up is a category killer here. D-Link’s app also comes in for a fair share of criticism—a long delay hearing sound from the camera is a common issue.  (The Android version of the app draws 235 1-star reviews, with folks complaining about battery usage, sluggish performance and more).

FYI: Several of the D-Link models seem to be priced to sell. For example, as of this writing we found a DCS-800L monitor for as little as $30 on Amazon.com. The reason: likely this is because people hate these cameras. The Amazon reviews of the previously mentioned 800L are nearly 50% 1 and 2 star. That’s unusually poor.

Bottom line: the camera is good but the software, not so much. Until D-Link improves the apps and set-up, we suggest a Nestcam instead. Rating: D