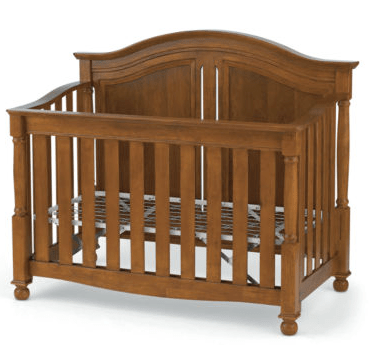 JCPenney likes to sell private label nursery furniture, like this crib by Bedford Baby. Shhh! Don’t tell anyone that Bedford Baby is actually made by Westwood.

JCPenney is a big player in the online crib business—their site has over 100+ crib options to choose from, along with a raft of other nursery furniture and accessories.

Penney’s has followed several different strategies for their crib options over the years. First they sell private label cribs like Rockland and Savannah (made by Yu Wei, a Taiwanese furniture company). Then they added cribs made by major manufacturers like Westwood but renamed them to make them seem exclusive to Penney’s. Westwood makes the Bedford Baby cribs for them, for example.

To this mix, now Penneys sells cribs made by manufacturers under their actual names. For example, they’ve added Fisher-Price, Delta, DaVinci and Million Dollar Baby, Simmons, and Franklin & Ben. The previous strategy of hiding the brand names was a mistake in our opinion, so this change is a positive. Prices for these brand names start at under $200 for Fisher-Price and soar to $900 for Simmons cribs (made by Delta).

We review all the above brand names separately in this section. As for Rockland and Savannah, their private label cribs, most readers tell us they are happy with the quality. Prices for cribs run $400 to $500; most of the dressers are around $450.

On the upside, Penney’s has a good reputation for safety. Yes, the company was swept up in the drop-side recalls of 2011-2, but overall Penney’s has had a good safety track record.

Penney’s customer service has been up and down in recent years. Although complaints are generally down compared to five years ago, we still see stories like this posted to our message board: a reader ordered a nursery set and it arrived three weeks early. So far so good, right? Yes, but when the reader opened the box with the dresser, she found it damaged (dropped on the corner and the top had buckled). Interestingly, the box was flawless, so someone had dropped the dresser before it had been packed.

So the customer takes the dresser back to Penney’s, which promised to ship a replacement. The replacement arrives a week later . . . but is the wrong color. When the customer calls back Penney’s to get this fixed, she finds the entire set has now been discontinued. Bottom line: our reader has to return the entire nursery set and start again.

The moral of this story is that, yes, freight damage can happen with any furniture order. But Penney’s compounds the error by shipping the wrong color as a replacement—there’s no excuse for that.

We used to recommend Penney’s for nursery furniture if you lived in a place with few retail baby store options. Now, of course, with Amazon and Wayfair, there seems be less of a reason to order from Penney’s, whose time may have seen to come and gone. Rating: C+