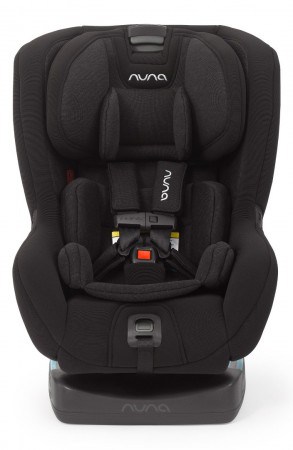 Comments: Nuna launched back in 2013 with an infant car seat (the Pipa) along with a handful of other baby gear items (high chair, strollers, etc.). FYI: Despite the company’s .eu domain suffix, Nuna isn’t based in Europe. Yes, it does have a design office  in the Netherlands, but the company is actually based in Reading, PA and makes all its products in China.

Nuna is a premium-priced baby gear brand that seeks to combine minimalist styling and top-end features. At least, that is the goal. The results so far have been hit or miss. We gave their infant seat a B-, a pricey $300 offering with a showy “dream drape” but lacks a no rethread harness.

So does Nuna do a better job in its first offering in convertibles? The Nuna RAVA certainly ticks all the boxes: extended rear-facing (to 50 lbs.), push-button recline with multiple positions, side impact protection with pop-out “pods.” Some of the RAVA’s features are clearly cribbed from other seats. The pop-open compartment (True Tension Doors) in the seat that allows for easier seat belt installs is clearly cribbed from Britax’s ClickTight feature. The extendable leg rest (for older kids riding rear-facing) is a riff on the Graco SnugRide 40 infant seat.

Nuna avoids repeating its mistake with the Pipa by going with a no rethread harness and other standard features you’d expect in the premium price point: retractable cup holders, infant head/body pillow insert, premium LATCH. There are five color options—grey, black, dark blue a dark red (berry) and purple (blackberry).

Reader feedback on this seat is quite positive—folks love the ease of use and installation, The RAVA is very simple to install, thanks to the True Tension Doors feature. The push-button recline with five levels is also a winner. Finally, readers say they are in love with the RAVA’s plush cover, which is probably the nicest on the market for luxury and fit.

What’s not to like? Well, let’s talk that price point: $450. The RAVA is one of the most expensive convertible car seats out today (the Clek Foonf is also up there). Yes, the RAVA is a nice . . . but one could debate if it is worth the 50% premium over a top-of-the-line Britax.

Also, we’ve heard from readers with preemies that said despite the RAVA’s five pound starting point, the seat didn’t fit their preemie well at all. That could be because the RAVA’s lowest harness position isn’t that low, compared to other convertibles.

And on the upper end, the RAVA’s top slot of 16.2″ is also BELOW that of the similar Britax Advocates top slot at 18.5″. We have concerns taller toddlers would outgrow this seat by height long before that stated 65 lb. limit.

These caveats aside, we’d recommend the RAVA. An excellent seat, assuming the price tag is within reach of your budget.  Rating: A-