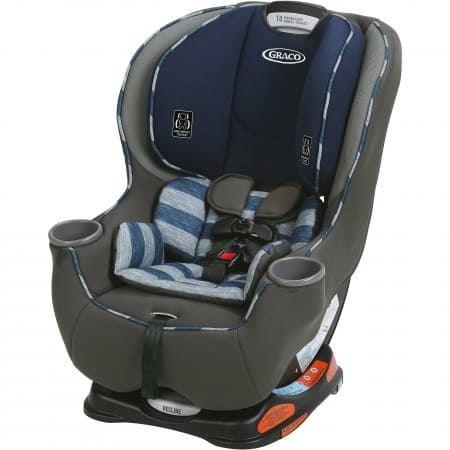 Cons: Similar to the $200 Extend2Fit, but only works to 40 lbs rear-facing. Fans of extended rear facing use should probably upgrade to the Extend2Fit. Dual cup holders add to seat width.

Comments: We get the folks at Graco may be running out of names for car seats—the Sequel? To what, exactly?

If you answered the “Extend2Fit“, you are correct! Like many Graco products, once the company has a hit, it tends to do spin-offs faster than Marvel Comics. The Graco Sequel is basically a Graco Extend2Fit that is scaled down to a lower price point ($152) and is sold as a Walmart exclusive as of this writing.

So what’s scaled down? The Sequel 65 works to 40 lbs rear-facing (versus 50 for the Extend2Fit). As such, the Sequel lacks the extension panel that allows for that extended rear-facing mode.

The dual cup holders on the Sequel 65 make this seat somewhat wide, which means fitting three across in most vehicles would be difficult at best. On the plus side, you do get side impact protection head wings and a six-position recline, which is a good value for a $150 seat.

The Graco Sequel was released just a month before we wrote this review, so we have very little reader feedback on it yet. Nor has this seat been independently crash tested or rated for ease of use by NHTSA. But given the face we gave the Extend2Fit an A-, we’ll start this seat out at a B+. Given Graco’s track record in this category, we will recommend this seat. Rating: B+