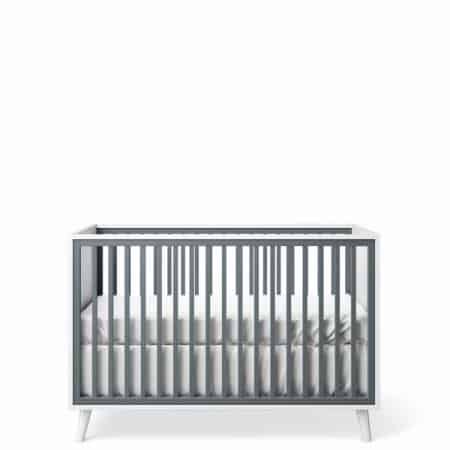 Romina got its start as a supplier to a Canadian nursery furniture maker; the company went solo in 2008 and has built a successful high-end brand focused on solid wood furniture.

Made in Romania, Romina’s success here could be attributed to two factors: first, good timing. Romina launched in the midst of the Chinese recall crisis in the early 2000’s—with furniture made in Romania, the company was one of the few not-made-in-China options out there at the time.

Second, Romina doesn’t cut corners when it comes to quality— the line features 100% solid beech wood construction. No MDF, no rubberwood, no veneers over particle board, etc. Romina dressers feature dove-tail joints, corner blocks and self-closing drawer glides that are smooth “like butter,” as one retailer described them.

Of course, this isn’t cheap—and if you want Romina, you’re going to pay for it. Cribs run $975 to $1500; a double dresser is $1175 to $1600. Yes, that is Restoration Hardware pricing . . . but the quality is much better at Romina, in our opinion. Plus RH’s nursery furniture is made in Vietnam/Asia, versus Romina in Europe (ok, Eastern Europe).

Romina’s  major emphasis is their eco-friendly production—sustainably harvested wood, water-based finishes with no VOC’s, no formaldehyde glues, and so on. On some collection, a “Bees Wax” finish is optional, which as the name implies, is all-natural. Romina touts it as the ultimate organic finish. If you prefer a darker stain or painted look, Romina also offers eight other finishes, including a navy, white and brown metallic. Adding to their eco-focus, all Romina cribs (except the Silva brand; see below) are now GREENGUARD certified to be low in chemical emissions.

Romina is offering a new, unique finish on some of their cribs this year, called Velvet. It’s a water based finish with some of the properties of rubber–it resist scratches and has a matte appearance. Two collections will offer the Velvet finish at no upcharge.

Realizing those prices are a bit rich for the average nursery shopper, Romina offers a lower-priced line dubbed Silva. These cribs retail for $700 or less with a double dresser coming in at $900. We know, $700 is hardly “low price” for a crib—but as crib prices even in chain stores creep toward $500, Silva is in the ball park. The difference between Silva and Romina? Silva dressers are engineered wood with veneers and one-inch solid wood borders (Romina is solid wood). Silva dressers still feature self-closing drawer glides, although the styling is simpler and less ornate than Romina. There are four Silva collections with a choice of three finishes.

Romina has upgraded Silva in the past year—they are now using beech wood components for the dressers and poplar plywood faces. The drawers in the Silva dressers have increased in size in the past year and now three finishes are available.

New for 2017, Romina is now selling direct from its web site, which is great if you don’t have a dealer neary by. As of this writing, shipping is free (take notes, Pottery Barn!).

Design-wise, Romina furniture is traditionally styled, although the company recently debuted a couple of modern collections with two-tone finishes (the New York, for example). We liked all the available accessories: each collection features nightstands, armoires, bookcases and the like. Our fave Romina style: an over-the-top crib (Cleopatra) that looks like a handlebar mustache (pictured below for your amusement), complete with a footboard that can be carved with your baby’s name.

New for 2017, Romina will debut a collection made from European Oak, which is heavy on knots and grain. 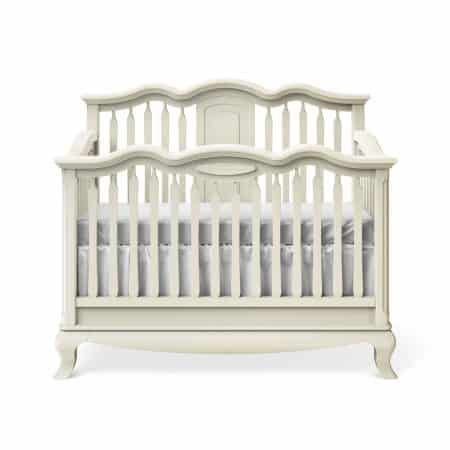