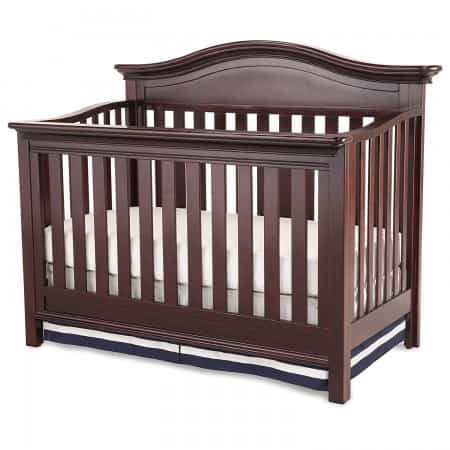 Here’s an interesting tale of rags to riches and back again. Simmons Juvenile was once one of the country’s biggest nursery furniture makers, selling cribs and dressers to many generations of parents.

Started in 1917 by Thomas Alva Edison to provide wooden cabinets for one of his recent inventions (the phonograph), Simmons morphed into a furniture company that also made mattresses. The company spun off its juvenile division in the 1980’s (just to confuse you, there is still a separate Simmons company that makes mattresses).

Then the company began its slow decline. Simmons made a couple major mistakes, chief among them never adapting to the changing nursery furniture market, which soon became flooded with low-price imports from Asia. Simmons stuck to making its cribs and dressers in plants in Wisconsin and Canada.

By 2004, Simmons’ deteriorating fortunes prompted the management to sell their crib mattress biz and then shutter the Wisconsin plant. Simmons sold the rights to their name to Delta, which then relaunched Simmons as a separate, upscale division aimed at specialty stores.

However, the re-launch of Simmons has been bumpy for Delta. Their first collection (imported from China and Vietnam) was a bust—$800 cribs and $700 dressers were met with little enthusiasm from stores or shoppers.

Delta/Simmons went back to the drawing board and decided to change strategies: instead of competing in the upper end of the market, they’d aim for the entry-level price point among specialty stores. Hence, Simmon’s recent collections feature cribs that are priced in the $300’s and are sold in stores like Target online. There’s even a $320 Simmons crib on Amazon.

How’s the quality? Simmons is all over the board: the upper-end dressers features self-closing drawers and other quality touches. But the lower end Simmons feature drawer glides more at home on a Delta dresser at Walmart than a specialty store. A parent who purchased a $550 five-drawer dresser said she was returning it after she found the dresser to be “very cheaply made and constructed.”

While most parent reviews of Simmons cribs are positive, there were quite a few complaints about shipping damage. If you can purchase this item from a store and inspect the contents of the box before leaving, that may make more sense than ordering online.

Simmons customer service also lags: more than one reader said they emailed Simmons with questions and received no response. Bottom line: if Simmons is trying to compete against other upper-end crib brands, they’ve got to do better than this.

So it is a mixed review for Simmons: kudos for the new lower prices . . . but the scattershot quality drags down their overall marks. It seems Simmons is still a brand in search of an identity. Rating: C+