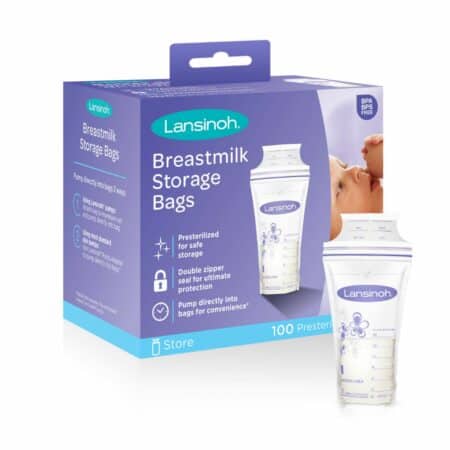 Last Updated: Mar 28, 2019 @ 7:47 pm. Why is someone trolling Lansinoh? A reader earlier this week spotted something funky going on with the customer reviews of Lansinoh Breastmilk Storage Bags:

Hi! When is the last time that y’all evaluated breast milk storage bags? I’ve seen a lot of really negative reviews about the Lansinoh bags on amazon, particularly in the last six months! Thanks!

Taking a quick look at their Amazon reviews (we recommended this product in our review of breastfeeding accessories), you might conclude that the quality has gone down hill in the past few months, as the 1-star reviews are flooding in. Like this one:

But when you look at the flurry of 1-star reviews posted in recent months about Lansinoh’s storage bags, you see a similar pattern: all the reviewers have only posted one review (called “one-hit wonders”—and their one review is the negative one about Lansinoh). They all use similar language, saying the bags leak.

What if there was a way to indicate these reviews are fake? Turns out, there is: ReviewMeta is an algorithm that can spot fake reviews, both positive and negative. How? It uses some of the same signals we mention above (one-time reviewers, similar language pattern, and dozens of other signals.)

Here’s what ReviewMeta warns about the Amazon reviews of Lansinoh Breastmilk Storage Bags:

In fact, out of the 5720 reviews posted on Lansinoh’s product, a stunning 38% are fake (“potentially unnatural” in ReviewMeta paralence). That’s much more than similar baby gear products.

While the overall rating for this product doesn’t change when you strip out the fake reviews, the TREND looks negative when you just look at recent reviews. And that could rightly scare new parents from buying it—which is exactly the point.

This is a relatively new thing called “brigading,” where there is a sustained effort to manipulate a product’s rating, usually for the worse. ReviewMeta explains brigading here, but the more common examples involve books by politicians (where partisans try to trash it). Or restaurants.

So who is trolling Lansinoh? The odds on favorite is a no-name foreign competitor, who is trying to trash the category leader. (The second-place Medela milk storage bags also show evidence of being trolled by negative reviews).

It takes quite a few resources (manpower, money) to pull this off, which points to a well-funded competitor. But again, who knows!

We think the product is good. Are there some actual negative reviews out there? Sure, but we look to our own testing, our own reader feedback and the balance of adjusted online reviews before deciding what to recommend.

What do you think? What should if anything be done to stop brigading? Chime in below with a comment.