VTech’s best-selling models are low-price, basic models like the VM5271-2, a simple model with two fixed cameras and a five-inch parent monitor. It is a good deal at

Unfortunately, parent feedback on VTech video monitors in general is mixed at best. Many parents found that it worked well only for a short time before they had issues with the camera connection to the parent unit, problems with battery indicators not working, poor picture quality and sound that stopped working.

VTech also makes a couple WiFi or streaming baby monitors. These cameras stream to a smartphone or tablet, plus they include a 5″ touch screen monitor. Most WiFi baby monitors do not include a parent unit (you have to bring your own device), so kudos to VTech for that. The VM981 comes with a 720p high def camera, allows you to zoom in up to ten times the normal vision and has infrared night vision for $162. The VM991 adds pan/tilt/zoom, wall mount and motion alert. It runs $212. 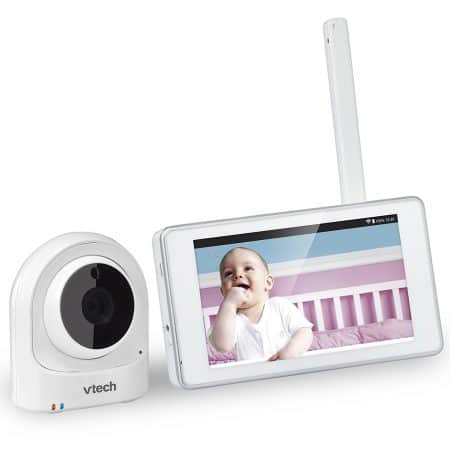 VTech’s wifi monitors can be set up as a network of up to 10 cameras throughout your home.

Overall, VTech video monitors get lukewarm ratings from parents—most folks are happy with the basic video quality for the monitor that runs close to $100. But, don’t expect a HD quality picture. (By contrast, VTech’s audio baby monitors get high marks).

Critics also knock the battery life of VTech’s parent units (usually no more than a couple of hours), as well as the lack of a belt clip and the fact you can’t remotely trigger the lullabies that the camera plays. And the VOX feature is hit or miss, as far as parent feedback goes.

Yes, some of VTech monitors are quite cute—cameras that look like owls or bears are adorable—but that’s about it.

Bottom line: if you stick to the simple, low cost models and don’t expect it to last more than a year, VTech delivers a good basic baby monitor.  The fancier the model or options, the more room for disappointment. Rating: B-