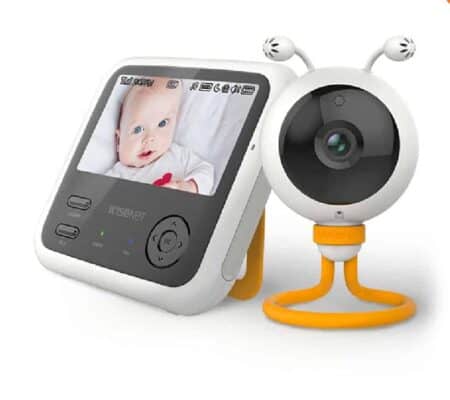 Video Baby Monitor review: Samsung / Wisenet. Samsung used to be a big player in baby monitors (in the early 2010’s), but in recent years the company has scaled back its presence. Now known as Wisenet, Samsung baby monitors have dwindled in sales and now rarely appear in the list of best-selling monitors on sites like Amazon. Here is an archived review in case you come across one second-hand.

Gadget king Samsung makes everything from HD TV’s to security cameras . . . so why not video baby monitors?

What’s unique about the Wisenet BabyVIEW is the flexible stand that let’s the camera wrap around an object . . . or just be used as a basic stand.

None of this is terribly innovative—most of Samsung’s competitors in this space offer similar specs. As for pricing, Samsung monitors are priced at about the same as similar offerings from competitors like Infant Optics.

So like all baby monitors, our review comes down to three basic factors: ease of use, picture quality and overall reliability.

As you might expect from this brand, Samsung monitors score well on ease of use, in our opinion—most functions are no more than two clicks away from the main screen or menu.

Let’s talk picture quality. In past reviews, we’ve given Samsung monitors good marks, noting their decent night vision. However, as we survey the field today, competitors have surpassed Samsung’s picture quality. That’s because many of the top-rated video monitors today stream in higher definition (1280 x 72o). The Wisenet BabyVIEW (SEW-3048WN) is low definition (640p), which results in a fuzzier picture.

Overall, we found other cameras we review in this section to offer better picture quality than Samsung’s models. Example: Samsung uses “digital” zoom which basically just enlarges the picture in the viewer, making it more pixelated/fuzzy.

Overall reliability is another issue for Samsung. We gave Samsung good marks for this in a previous review, but recently, we see more reader complaints about Samsung monitors failing in one way or another after a short period of use. Battery issues (units not recharging after six months of use, for example) are common across the line. Range also crops up as a major frustration—Samsung monitors are again falling behind competitors. Samsung’s promised 900 feet of range is more like 90 feet or less, say readers.

Samsung needs to upgrade this line with more HD cameras and fix quality issues. Rating: B-