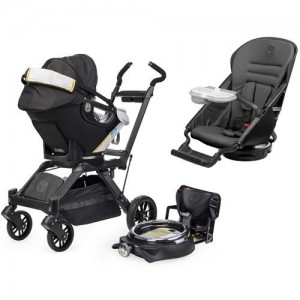 Stroller brand review: Orbit Baby. In case you are new to baby gear, here’s a quick history of Orbit Baby, a company once hailed as the Apple of baby gear design for its sleek stroller and car seat combo.

Orbit was launched in 2003 by two Stanford University students, Bryan White and Joseph Hei. Their brainstorm: a modular stroller “hub” that paired the company’s iconic infant car seat . . . which looked like a Crock Pot (wish we thought up that description, but kudos to the person who did) . . . with various stroller frames. The 360-degree swivel action of seat was the star.

Orbit blasted into the pop culture stratosphere with an iconic appearance on The Office, when Dwight Schrute spent an entire episode trying to destroy the pricey travel system to no avail. While that episode may qualify as the strangest baby gear product placement in a TV series ever, it showcased the Orbit’s ability to withstand the show’s extreme road test. You can see the clip here:

Orbit’s founders sold their company in 2011 to ERGObaby for $17.5 million. ERGObaby is best known for its carriers—and we suppose they saw this as an opportunity to expand further into more “travel” baby gear products. The company also hoped to expand Orbit to international markets.

Unfortunately, what Orbit Baby didn’t have was much in the way of profits—or enough profits to enable the brand to continue to invest in new products.

Obrit’s infant car seat/combo cost a princely sum of $900 in 2004, or $1200 in today’s dollars. Like all car seat/stroller companies, Orbit needed substantial capital to engineer, design and launch new models, the lifeblood of any baby gear company. Unfortunately, given the company’s finances, the company’s products started to age and the brand struggled to compete with bigger names like Britax and Graco.

Then Orbit ran into big trouble—it picked a fight with Consumer Reports, who issued a report in 2009 saying the Orbit infant car seat wasn’t safe. Orbit disputed the crash testing. We won’t rehash that entire back and forth, but it couldn’t have been helpful to Orbit. Combine that with the deep recession of 2008-09 and the subsequent lack of demand for $1000+ baby gear items, and you’ll see why Orbit ran into trouble.

So Orbit’s founders sold their company in 2011 to ERGObaby for $17.5 million. ERGObaby is best known for its carriers—and we suppose they saw this as an opportunity to expand further into more “travel” baby gear products. The company also hoped to expand Orbit to international markets.

It didn’t take long for the marriage to sour. Yes, ERGObaby released a couple of new Orbit products, but they flopped.

After five years, ERGObaby gave up and abandoned the brand in 2016, shuttering production.  The same year, ERGObaby sold Orbit to the Safian Group, a South Korean company. In 2019, Safian revived the brand and partnered with a California investment group called Orbit Global Inc. to relaunch the brand, according to the new/old company’s online biography.

Orbit’s reboot features its iconic infant car seat for $480 and and a stroller for $1200. Besides new colors (rose gold frame on the strollers, for example), we’re not sure what has changed from the previous Orbit versions.

Here are the changes to the Orbit Travel System in the current G5 model:

Orbit appears to have re-launched as a direct-to-consumer brand—that is, it’s only sold online and not in stores. Stroller brand review: Orbit.