The models. Mountain Buggy’s forte is the tri-wheel stroller with lightweight aluminum frames (21-24 lbs., depending on the model), 12” air-filled tires with polymer rims, fully reclining seats, height adjustable handles and one-step folds. While you could certainly use these stroller in a city with rough sidewalks, the main focus is on all terrain adventures (hiking, beach, etc). In recent years, the brand added to ultra-compact strollers to its stable.

The brand’s flagship model is the Urban Jungle (24 lbs.). It has a front wheel that can swivel or lock into place, plus a raft of available accessories, including a car seat adapter, carry cot, rain cover and more. Unfortunately, the cup holder is an extra expense.

This stroller is now known as the Urban Jungle Luxury Collection (or just Luxury Collection online; ; pictured). These Urban Jungles feature upgraded fabrics (including hand stitched leather bumper bar with matching satchel). The stroller’s storage basket now holds up to 29 lbs. worth of stuff, if you need it! Also included: a new handlebar break and a new smaller, one-handed fold.

Mountain Buggy introduced some of the new features on the Urban Jungle Luxury Collection to the rest of its line-up in the past year:

The Terrain ($599.99) used to be a fixed wheel stroller, but the most recent version lets you lock or swivel the front wheel. The big difference between the Terrain and Urban Jungle: The Terrain’s bigger 16″ wheels (versus 12″ for the Urban Jungle). This adds about four pounds of weight (29 lbs).  With the larger wheels, the Terrain is pitched more for joggers and runners. In the past year, the Terrain added water resistant fabric, a one-hand fold, hand brake and a second set of 12″ rear wheels if you want to switch out the bigger 16″ wheels when tooling around town.

The Swift (, 21 lbs.) is a compact version of the Urban Jungle—it has smaller, 10” tires. In a recent update, Mountain Buggy added a cup holder and bumper bar, the new one-hand fold and an upgraded, sleek frame. 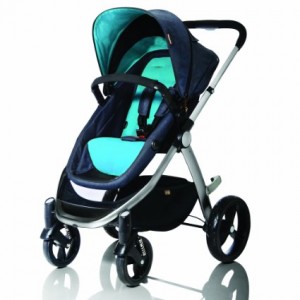 Departing from the brand’s tri-wheel design is Mountain Buggy’s four wheel Cosmopolitan ($289.00, 26 lbs.). It features a reversible seat that turns into a lay-flat bassinet for newborns, EVA/rubber tires (12″ in rear, 8″ in back), two step fold and large canopy. In the past year, Mountain Buggy rolled out a travel system combining the  Cosmopolitan stroller plus a Phil & Ted’s Alpha Protect infant car seat for $500, but this bundle is hard to find online.

Obviously, the Cosmopolitan is drifting away from Mountain Buggy’s core market (note the lack of air-filled tires). This model is clearly aiming at the multi-function market dominated by UPPAbaby’s Vista and Britax’s B-Ready.

Along the same lines is the MB Mini travel system (

Amazon Auto Links: InvalidParameterValue: The ItemId B00Z6JKH58 provided in the request is invalid.

)—basically, this is a Swift that substitutes foam filled wheels for the air tires. This helps shave off a few pounds in weight—the MB Mini is 16.8 lbs. This stroller includes an infant seat and adds the new one hand fold and adjustable handle. An optional cup holder and snack tray are available. 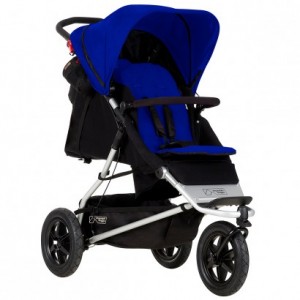 You can see Phil & Ted’s influence on this line with the +one Mountain Buggy ()—this inline stroller can hold two kids in a front/back stadium seating position, like a tandem version of the Urban Jungle. This stroller has the new one hand fold, even with the second seat attached. Current +one strollers include an infant mattress so you baby can lay flat in the stroller for a nap. Optional items include a carry cot and the Phil & Ted Protect infant seat can be used as well. Car seat adapters for other brands are available.

If you still want a traditional side-by-side double stroller, Mountain Buggy has their Duet ($669.95 $622.99; also called the Duet V3). The Duet’s big selling feature: it’s the same width as the single Urban Jungle stroller. That’s right, they are both 24.5″ wide. The Duet can also be used with one or two car seats (adapters required; $45 each) as well as with one or two carrycots (sold for $140 each). The Duet has a one-hand, fast fold and a total weight limit of 79 lbs., which is less than other doubles like the BOB Revolution Duallie (100 lbs.). Some parents also note the seats are very narrow so some kids won’t be able to use this stroller for long.

Mountain Buggy debuted the “Duet As a Single“—basically their Duet stroller with a single seat and the ability to add a tote bag as a side car (). The tote bag can hold 40 lbs worth of groceries, which would be great for urban parents who don’t own a car. Of course, you can purchase a second seat to turn the Duet back into a double. Here’s a look at the tote bag configuration: 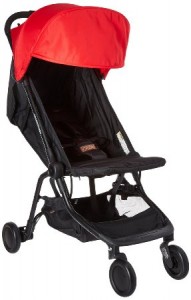 The Nano ($167.95 $159.20, 13.1 lbs.) offers parents a lightweight travel stroller with universal infant car seat straps (to fit any infant car seat). This stroller is clearly aimed at folks who do a lot of airplane travel. The Nano comes with a travel bag and doesn’t need to be gate checked … or so Mountain Buggy claims (grumpy airline gate attendants may not agree, however). The 2016 Nano has a few tweaks including a deeper seat recline, bigger canopy and a standing fold. It weighed in at 12.5 lbs., which is impressive.

With the success of the Nano, Mountain Buggy added a Nano Duo, ($479.95) a lightweight side by side with the features of the original Nano. Great news: with an optional car seat adapter, you can attach two infant car seats.

Our view. Mountain Buggy generally gets high marks for quality and usability. Fans love the off road ability, although critics wish the canopies were larger. We’ve also seen a few complaints from heavy users on the durability of tires—some folks go through one or two replacement sets because the tread wears too quickly. If Mountain Buggy could offer heavy duty tires as an accessory, that might do the trick. As we’ve mentioned before, air tires require user maintenance—filling them up with air, dealing with flats, etc. That’s the trade-off for the smoother ride.

The best strollers in this line are the Urban Jungle Luxury Collection, Terrain and Cosmopolitan. The Nano gets mixed reviews, with fans loving the compact design but wishing the canopy was better (a recent refresh aimed to fix that—so far, so good). We also see other complaints about the Nano’s steering and overall maneuverability. At $250, the Nano is overpriced in our opinion.

Our readers are also cool to MB’s +one and Duet, which fail to live up to their promise.

Overall, we give Mountain Buggy an A- . . . we like the Urban Jungle and Terrain, but the mixed reviews on the Nano drag down their rating a bit.  Baby Bargains Resale Rank: Fair. Rating: A- Stroller brand review: Mountain Buggy