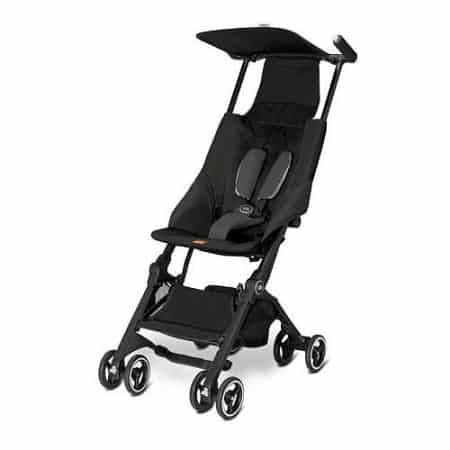 The GB Pockit ($180) is an ultra-compact folding stroller aimed at parents who frequently travel.

Stroller brand review: GB. Chinese baby goods manufacturer and designer Goodbaby (or, as the brand is referred to here in North America, GB) has been on a roll in the past couple of years. The company got its start designing and manufacturing car seats and other gear for other major baby goods makers (Dorel/Cosco, etc.), but lately it has set its eyes on selling its goods directly to US parents. Stroller brand review: GB

To that end, the company has snapped up baby gear companies Cybex and Evenflo. And launched Urbini, a new car seat/stroller brand that is exclusive to Walmart. If that weren’t enough, the company is also rolling out strollers under its own brand GB. Here’s an overview:

The Models. GB’s most famous model is the Pockit (

), which the company claims has the world’s most compact fold. When folded, the Pockit looks like this: When folded, the GB Pockit measures just 12″ x 7″ x 20″, making it among the smallest folding strollers on the market.

The GB Pockit is part of a new ultra-compact stroller category aimed at frequent traveller parents. The bare bones Pockit has an oddly looking sun shade and skimpy basket—and that’s about it. The retail was $250, but we see Amazon is now selling it for

. The negative: the Pockit + weighs almost three pounds more than the Pockit.

GB’s other strollers are less showy than the Pockit. Stroller brand review: GB 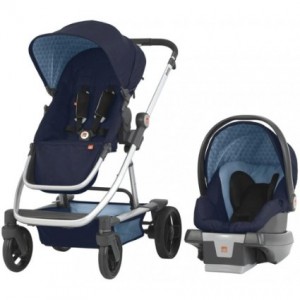 ) is a travel system that pairs a multi-function stroller with GB’s infant car seat, the Asana35 AP. Other travel systems include the Alara and the Lyfe.

The Lyfe travel system ( $399.98 ), has a seat that morphs into a bassinet, has a zippered canopy extension and comes with the Asana infant seat. Other features include four position recline, forward and rear facing seat, napper bar, self-standing fold (keeps the stroller up off the ground), and parent cup holder. The fold requires two hands, however.

GB also make a more lightweight option: the Qbit. The Qbit’s mojo is it’s fold. One handed, it folds down into the size of a shopping bag (includes a bag to protect it while it’s under your seat on the plane). Yep, 12″ by 14″ by 7″. It’s impressive. This is the stroller you buy (if you can afford it) for Disney World. In a recent refresh, GB gave the Qbit a flatter recline and extended leg rest. the full canopy is a plus. It will weigh 16.1 lbs. compared to the original Qbit at 15.6 lbs. At $140, it’s not as overpriced as other GB strollers.

Our View. As a stroller brand, GB is an enigma.

When GB first debuted, these strollers were premium priced. What exactly was GB aiming for here? These strollers are certainly up-spec’d over the sister brand’s Evenflo strollers sold in Walmart stores. But did GB stroller actually merit the price premium?

As we go to press on this review, we notice that most GB strollers are being discounted on BRU’s web site for half off. And Amazon has picked up the Pockit for well under the $250 retail.

That jives with our first impression of GB—these strollers were grossly overpriced.

Example: at $180-$200, the Zuzu is aimed squarely at the top of the umbrella market, where UPPAbaby’s G-Luxe reins. And on paper, both of these strollers are similar (adjustable footrest, standing fold, etc). But look at the canopy—while the Zuzu has an interesting ventilated zippered extension, the G-Luxe’s pop out sunshade is more practical and offers better coverage.

And let’s talk weight: at 15.8 lbs., the Zuzu is about 20% heavier than the G-Luxe. Yes, we are only talking two pounds, but every ounce counts when hauling a stroller in and out of a trunk.

Finally, we like the removable fabrics (for washing) on the G-Luxe and other premium umbrella strollers, a feature the Zuzu lacks.

The Zuzu wins when it comes to car seat compatibility, with built-in adapters . . . but the Zuzu’s fold pushes the stroller’s footrest to the ground, which is guaranteed to get the fabric grimy when you fold it in a parking lot. The G-Luxe keeps the fabric off the ground when it is folded down.

Bottom line: the Zuzu is a decent first effort, but overpriced. We’d be more happy with this stroller at $125.

The Qbit is just too cool. The fold brings the stroller down to such a tiny size, it’s hard to believe. It would be a great travel stroller although it doesn’t recline and there’s not that much storage. The canopy is pretty good size, however.

The Pockit is probably GB’s best known stroller and garners the most positive reviews from our readers. Yet, at its heart, this is a niche stroller, aimed at parents who do serious air travel (or mass transit commuting). The sun shade is a joke and the tiny basket make the Pockit impractical for most outdoor stroller outings. While fans love the compact fold, critics note this stroller is hard to use if you are taller than average. And this stroller feels flimsy when you push it—disappointing at this price point. Finally, we should note the Pockit’s seat doesn’t recline . . . so if your baby is still napping, the may not be the best stroller option.

To address some of the Pockit’s shortcomings, GB will release the Pockit Plus later in 2017—this version will feature a slight seat recline as well as the ability to hold an GB or Cybex infant car seat (adapters sold separately, unfortunately). The price will be $280. The new features add about a pound in weight, making the Pockit Plus just under 11 lbs. GB says the Pockit Plus will debut at the end of 2017.

The Evoq is a multi-function stroller that has a reversible seat and height adjustable handle bar. The shallow basket is an odd oversight here, as GB’s other strollers feature better basket designs. As a travel system, the Evoq fits the brand’s Asana35 AP infant car seat—but that’s about it. There are no other adapters, which limits the appeal of the Evoq. In fact, there are no other accessories for this model, which is major negative (want a cup holder? No cup holder for you!). And parents complain it’s not compact enough.

Bottom line: the first efforts for GB are a mixed bag. The Pockit is a hit for parents who frequently travel. But the rest of line? Meh. Rating: C Stroller brand review: GB