And now for something totally different: a stroller that can morph into a pickup truck. Well, not quite, but the Austlen Entourage can expand to carry a picnic cooler, soccer gear or a second child . . . and a baby, of course.

Released in 2016, the Entourage is made by Austlen, a stroller start-up based in Texas. The concept: enable a single stroller to expand for a second child (which is not unique, of course) or a second child and then a ton of stuff (think the beach, shopping in NYC, etc). That latter feature is a first for a baby stroller.

In a nutshell, the Entourage goes from this: 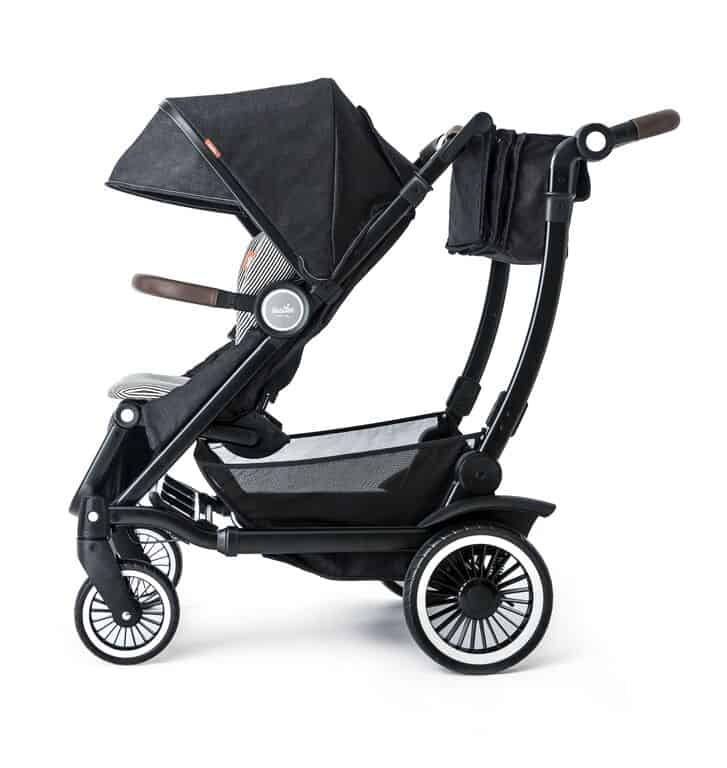 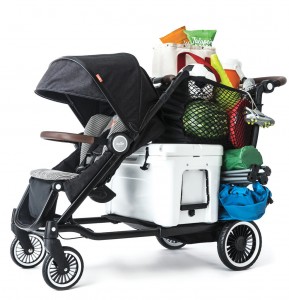 Or any of these configurations: 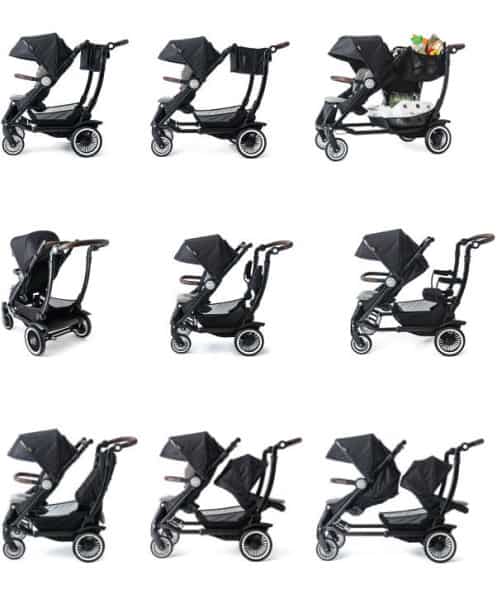 What you basically get is the Ford F150 of strollers (okay, enough pickup truck metaphors). So how much does all this presto-chango cost? $850—that is for the basic stroller frame (plus arm bar and market tote) and seat, which fully reclines and fits facing forward or rear. Here’s the most amazing feature: the frame expands from 43″ to 55″ (!), with the tote expanding along with the frame.  Yes, it even stands when folded (it folds down to 33″).

For a second child, the Entourage offers a few options: a jump seat/platform rider (called the Sit+Stand, $180) or second infant seat to face mom. What about car seat adapters? Yes, they are available for both the front and rear seating positions. Other accessories include a cargo bag, seat liners, cup holder, rain and mosquito covers plus a foot muff. (A quick note on the cup holder: the market tote includes two built-in cup holders; you can also buy an attachable cup holder as an accessory).

Austlen also now offers “beach wheels” for the Entourage—$60 for a pair of quick-release wide wheels for rolling through sand.

So what’s the catch? Well, the $850 price for one is, uh, high. We suppose you could justify this if you live in an urban area and don’t have a car, as your stroller becomes the all purpose hauler of groceries and the like. If you are planning to have two kids in quick succession or have twins, this stroller will also make sense.

Let’s also talk about the Entourage’s weight: we were a bit overwhelmed that it tipped the scales at 32 lbs.—but without the canopy and arm bar.

Also: you can chose any color of this stroller as long as it is black or blue. That’s it for color choices. Also: this stroller is sold in pricey boutiques at the time of this writing, so finding it at a discount is not easy.

The Entourage has been out in the wild a few years as of this writing. Feedback from our readers has been relatively light, which given the price isn’t a big surprise. The few parents we can find who use it are happy . . . with caveats.

As we guessed from our initial preview, weight and bulk are a big issue with the Entourage. When it comes to strollers (even doubles), weighing more than 25 lbs. is pushing it; tipping the scales at 30+ lbs. is reaching the outer limits of reality. As one mom commented on Magic Beans, it is a “beast and a half, even when it is compressed to it’s shortest length.” She said moms who have back issues or C-sections, be forewarned.

Part of the challenge with the Austlen Entourage is physics—load up this stroller with kids, gear and the like as intended and good luck trying to push it. Or turn it.

To test this, we loaded up an Entourage and a competitor (the UPPAbaby Vista) with 2 kids and gear at a local baby store to test the steering. We thought the UPPA was easier to steer when loaded. Does it have all the whiz bang features of the Entourage? No, but steering and handling matter.

One note to off road users: the Entourage has EVA foam wheels instead of air-filled—while that means you don’t have to worry about flats, the ride won’t be as smooth over bumps as you’d find with air-filled wheels. (On the plus side, the Entourage wheels have a dual-spring, ball-bearing suspension to smooth out bumps).

The closest competition to the Entourage is the Bugaboo Donkey which runs $1500 or so fully configured for two kids. So that makes the Entourage a bargain, comparatively.

Bottom line: the Entourage is a good first effort, but like all version 1.0 strollers, this one falls short. We’re going with an initial rating of a B- for this stroller. We like the concept and innovation here—but the weight/bulk and too-high price limit the appeal of the Entourage to a small niche of parents. Rating: B-