Play yards with newborn nappers: safe or not? 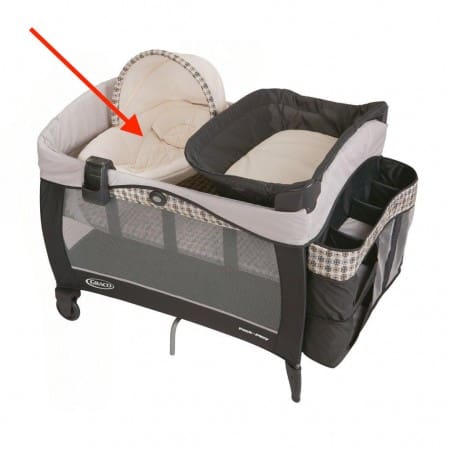 In our most recent BABY BARGAINS book, we recommended the Graco Pack N Play but specifically said we’d advise against the “Newborn Napper” feature (see picture at right; the Napper is on the left side of the playpen). Our concerns with the napper was how it was designed and marketed to parents as a place for newborns to sleep. Here’s how Graco describes it:

The Newborn Napper’s soft, cushy fabrics make it the perfect nap spot for your new arrival.

We stated in the book that we consider soft fabrics and items like the napper’s the head support a risk for Sudden Infant Death Syndrome (SIDS).

Since we published this statement, Graco contacted us to share safety and testing data on the Newborn Napper.

So let’s take a second and look at this controversy and give you both sides of the argument.

First, a bit of background: the play yard in recent years as morphed into a second nursery. Graco was one of the first play yard makers to spot this trend and began adding features to their best-selling Pack N Play to meet this use. Hence, play yards began sprouting bassinets, diaper changing stations and the like.

In 2008, Graco introduced the Newborn Napper, a separate space that sat above the bassinet mattress. This proved popular and Graco has expanded the number of Pack N Plays with this feature in the past year to include ten models. It is currently the fifth best-selling play yard on Amazon.

Graco includes several safety warnings for the napper. First, the napper is only for “supervised sleep”: “You are responsible for providing adult supervision when using your napper,” says the instruction manual. Parents are supposed to discontinue use of the napper when a baby can roll over (that typically happens at two to four months of age).

As for safety standards, The Newborn Napper falls into a grey zone—there are no specific federal safety standards for a napping device that is attached to a playpen. Graco told us they believe the Napper falls under standards that would be similar to swing or a car seat. It is not intended for overnight sleep.

As for “soft cushy fabrics,” Graco told us they think it is safe. “The Napper is designed with a breathable material that has been tested for gross misuse and has passed a number of third party tests for risk of suffocation, CO2 rebreathing, and strangulation. The napper is also designed to keep the baby in a safe position and prevents them from rolling by centering the child’s weight and sitting at an incline to keep the child in a safe position,” the company said in an email.

Finally, Graco notes that in the hundreds of thousands of Newborn Nappers that have been sold, there hasn’t been a single consumer complaint about the product causing suffocation or asphyxiation.

All this is well and good—but we still aren’t going to recommend the Newborn Napper. Here are our reasons:

1. The American Academy of Pediatrics (AAP) just released an updated policy statement on SIDS that clearly states infants should ONLY be put to sleep on a flat, firm surface with NO soft bedding of any kind. The Newborn Napper clearly does not meet this test. While we understand that Graco has tested the product and believes the “soft, cushy fabrics” it uses are safe, we believe this at best sends a mixed message to parents. Just to be clear: we think the BASSINET feature on Graco and many other play yards is safe—this provides a flat, firm surface for babies to sleep.

2. It is unrealistic to think that a parent will be able to supervise their baby sleeping in the Newborn Napper at all moments. And babies can roll over with little or no notice, as soon as two months old.

Sitting devices, such as car safety seats, strollers, swings, infant carriers, and infant slings, are not recommended for routine sleep in the hospital or at home. Infants who are younger than 4 months are particularly at risk, because they might assume positions that can create risk of suffocation or airway obstruction.

So you might ask what is “routine sleep”? Is a newborn nap in a Napper “routine sleep”? We’d argue there isn’t much difference between naps and “routine sleep”. Newborns sleep for 2-4 hours at a stretch, eat and then go back to sleep again. There is little time they are actually awake. Hence, the safest place for a newborn to sleep (whether you call it a nap, nighttime sleep or whatever) is in a full-size crib or bassinet withe a flat, firm surface.

Bottom line: our recommendation stands. We recommend the Graco Pack N Play with the bassinet feature. We do not recommend the Newborn Napper feature.

What do you think? Feel free to post your comments below.