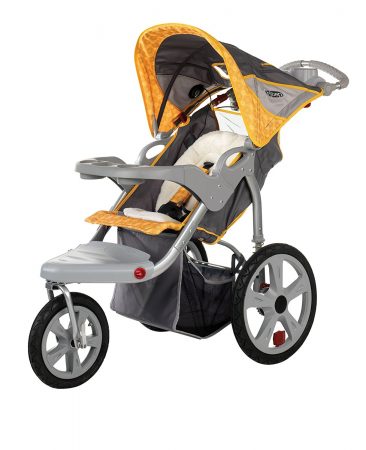 Instep is part of the Pacific Cycle bicycling conglomerate, which in turn is part of the Dorel/Cosco juvenile products empire. InStep used to have Schwinn as a sub-brand but appears to have ended that relationship.

The models: Instep used to have a wide variety of fixed wheel and swivel wheel strollers including the Flash, Safari, Twin Flash, Schwinn Turismo and Schwinn Arrow. It appears they now only produce the Grand Safari.

The Grand Safari has a turnable front wheel (12″ in front, 16″ rear) with manual lock, plastic rims with air filled tires, a remote locking front wheel, car seat adapter, shock absorbers, canopy mounted speakers (work with most MP3 players), child tray and fleece seat pad. All this for a mere $148. And that’s what makes Instep attractive: the price. A double version is $250

Our view: But don’t kid yourself. The Grand Safari isn’t really a jogging stroller. Think of it as more of an all-terrain vehicle that looks like a jogger. It has a lot of features for the price. But parents complain extensively about cheap construction and faulty design. Pieces break, tires go flat, the speakers don’t work and more. Overall, this is one poor quality stroller. Baby Bargains Resale Rank: Poor.