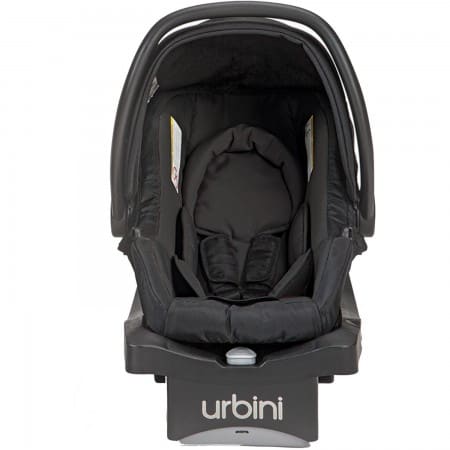 Cons: No European belt-bath for installations without base. Previous incarnation as the Petal didn’t perform well for parents when it came to adjusting harness. Little stroller compatibility beyond Urbini’s own strollers.

Comments:  Urbini was the Walmart-exclusive brand from Chinese baby gear behemoth Goodbaby, which also owns Evenflo and Cybex as well as selling baby gear under its in-house GB moniker. You can now find this seat on other web sites including Amazon.

The Urbini Sonti is a successor to the Petal (now discontinued; see our review here), which was their first effort at a mass-market seat under this Walmart-exclusive brand. The Sonti continues in that vein, with a rich set of features for seat that sells for under $100.

The big headlines for the Sonti are a “extra-grip” seat belt lock-off in the base, which has four adjustable positions. The lightweight carrier (under 8 lbs.) features EPS foam, harness pads and  a removable preemie insert while the base has a recline indicator and push button lower anchor connectors—these features are often seen on seats much more pricey than $75.

Comparing the Sonti to the Petal, the Sonti has a lower harness slot for smaller babies, three crotch belt options, one more than the Petal. One disappointment: while the Petal could be used with “European belt path” routing when installed without the base, the Sonti can not.

Consumer Reports hasn’t crash tested the Sonti yet, but the similar Petal earned a “better” rating in its last report.

What about stroller compatibility? Well, the Urbini Sonti is sold as a travel system with the Urbini Omni Plus and Turni strollers.  It also works natively with the Urbini Swift and Rerversi models. We gave Urbini strollers a B+ in our latest review. Beyond Urbini’s strollers, however, the Sonti has little or no capability as most other stroller brands do not make adapters for it. Oddly, there are also no adapters for Urbini parent GoodBaby’s sister brands, like Cybex, Evenflo or GB. We guess Urbini and Walmart want you to keep your stroller shopping limited to Walmart.

We gave the Urbini Petal a C- rating, noting parent complaints about a difficulty in adjusting and rethreading the harness. The Petal’s narrow carrier also generated complaints from parents who said their babies outgrew the seat long before the 35 lb. limit—since the Sonti seat has a similar width, we’d expect similar results.

That said, parent feedback on the Sonti has nevertheless been relatively positive, so we’ll give this seat a higher rating than the Petal. Given all the features of this seat for a price under $100, the Urbini Sonti packs a punch, value-wise.