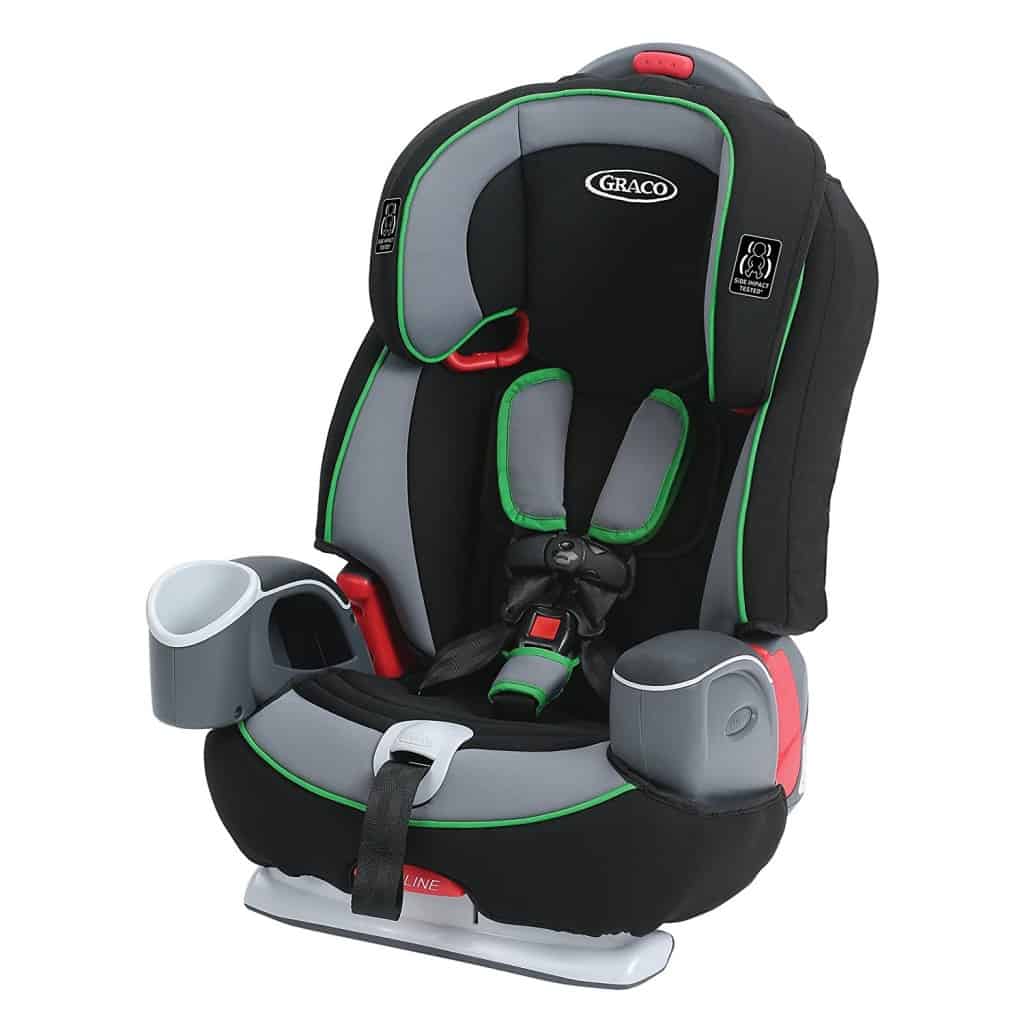 NHTSA ease of use rating:
Three out of five stars (older model was tested).

Cons: No LATCH connectors to keep seat in place when unoccupied.

Comments: Here’s the best-selling combo booster seat on the market—the Graco Nautilus 65 is a harnessed booster that works with a five-point harness to 65 lbs. and then converts to high back booster (100) and even a backless booster for older kids. The harness is a big plus if you have a toddler who has outgrown his convertible seat, but wish to keep him in the harness for a while longer (the 65 lb. limit should fit most five year olds).

The Nautilus’ other features include padded armrests (one side has a cup holder), three-position recline and decent padding. The seat is lined with EPS foam.

The Nautilus’s biggest competitor is the Britax Frontier, so let’s see how they compare. The Britax Frontier is bigger and wider than the Nautilus—and the Britax seat works up to 90 lbs. with the five-point harness. Folks generally give the Frontier better marks for padding, although the more expensive Nautilus models offer similar padding.

In our last review of the Nautilus line, we noted that the Graco seats didn’t have a no rethread harness and had only two crotch  strap adjustments. Good news: the latest models have a third crotch strap adjustment just like the Britax Frontier.

And Graco has rolled out a another big improvement to the Nautilus: all versions have a no rethread harness (called Simple Safe Adjust Harness; before this feature was just on the most expensive Nautilus). There are three Nautiluses in the line-up: the Nautilus 65 ($120, base model that works to 100 lbs. as a belt-positioning or backless booster), the Nautilus 65 LX

($170, which adds buckle pockets to hold the harness when not in use and a 120 lb. limit) and the  Nautilus with Safety Surround Protection (enhanced side impact protection), was sold in Target for $200 but now is just for sale on Graco’s site.

So with these improvements, it now basically comes down to price: the basic Nautilus is HALF the cost of the Britax Frontier . . . and we know that’s nothing to sneeze at.

As for reader feedback, the Graco Nautilus earns positive marks from readers for its overall ease of use. A handful of dissenters say the seat was hard to install with a tight fit in their vehicles. Most of the complaints about the Nautilus are about pre-2014 seats before the crotch buckle issue was fixed.

The IIHS ranks the Nautilus as a Best Bet when used in highback mode; the Britax Frontier earns the same rating. Consumer Reports gave the Nautilus its top rating for crash protection (“excellent”), scoring it at the top of its rankings of 12 harnessed boosters.

Bottom line: we like the Nautilus—it is among our top picks in this category. Rating: A