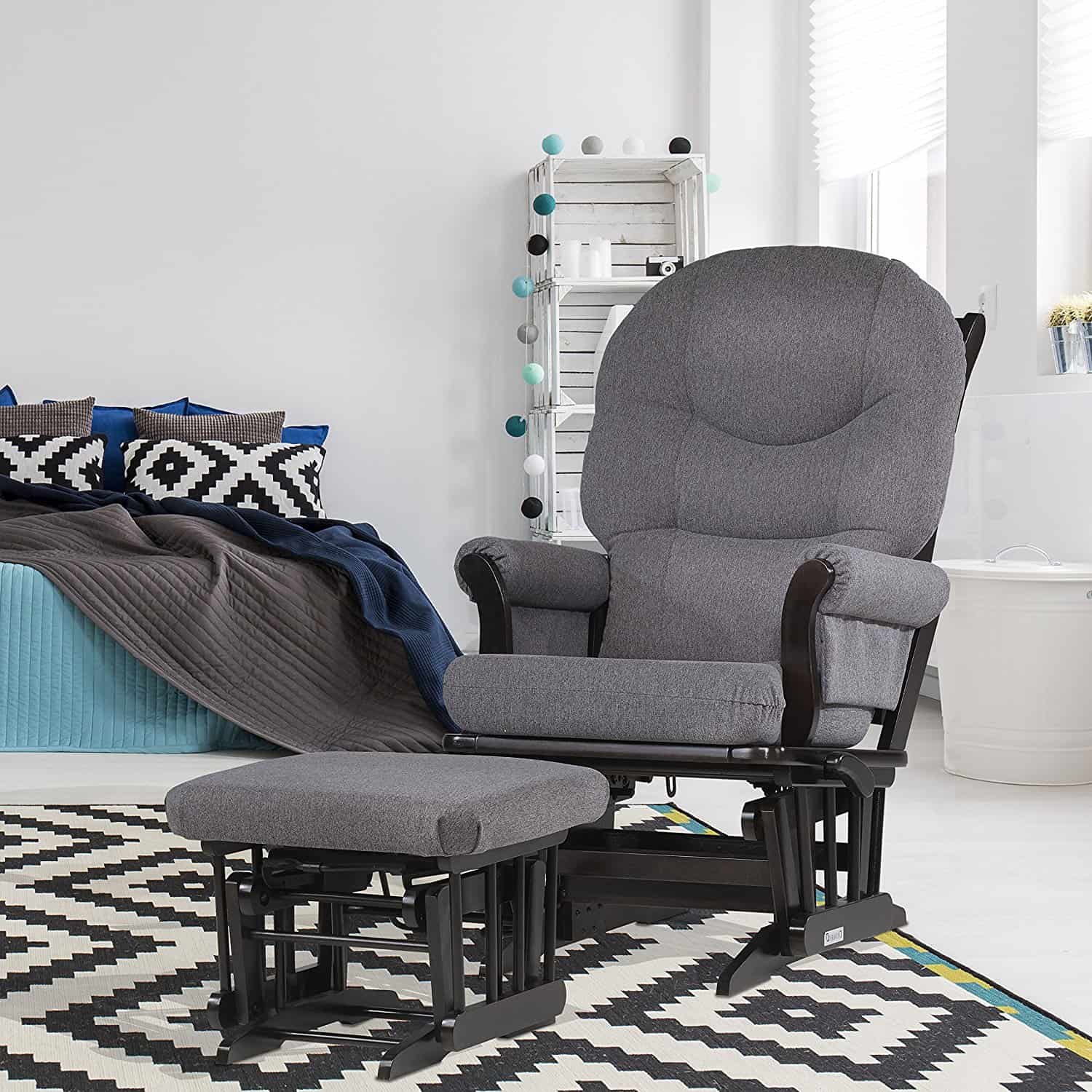 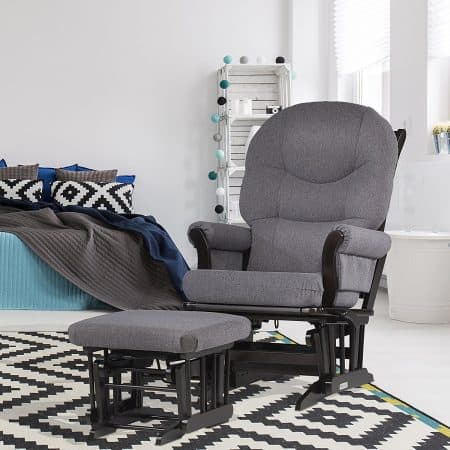 Quebec-based Dutailier is to glider-rockers what Google is to online search. Thanks to superior quality and quick delivery, Dutailier probably sells one out of every two glider rockers purchased in the U.S. and Canada each year.

Dutailier has an incredible selection of over 90 models, seven finishes, and 80 different fabrics. The result: over 37,000 possible combinations. All wood is solid maple or oak and features non-toxic finishes. You have to try real hard to avoid seeing Dutailier—the company has 3500 retail dealers, from small specialty stores to major retail chains. In the past year, Dutailier’s Montreal designer has added a cool modern style chair ($800 and up) to match its Papaya crib, dresser and nightstand (see cribs for more info). 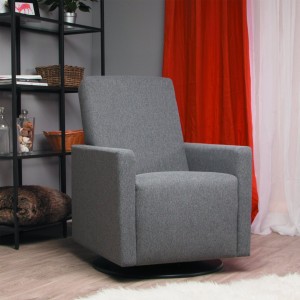 A swivel glider in the Ultramotion category for $580.

Prices for Dutailier start at about $400 (chair only) for their “Ultramotion” line sold at discount stores like Target.com. The Ultramotion gliders are entry-level: you get basic fabric cushions and exposed wood accents. Other models are exclusive to Amazon.com and priced around $420 to $530. Some fancier fabrics can run as much as $700 for the chair only. The good news about Dutailier at chain stores: models are often discontinued and then discounted—BRU often sells these chairs and floor models for prices in the $200’s.

You can spend much more than that—Dutailier’s specialty store line lets you customize a glider-rocker to your heart’s content . . . add a swivel base, plush cushions or leather fabric and you can spend $600. Or $1000. The latest rage: all upholstered glider rockers run $1000 to $1700 and come in leather or fabric.

If you like the upholstered look but don’t have that much coin, Dutailier offers an option: chairs with fully upholstered arms (but open bases) for $600 to $650 with ottoman in six fabrics and five finishes. Basically, much the same look, half the price.

Realizing all these choices can be a bit daunting, Dutailier moved in the past to simply its offerings: now, all fabrics can be used on any chair. Dutailier’s web site now divides its wood gliders into two categories: modern and traditional.

Dutailier offers an “auto lock” feature on some chairs—it’s always locked when no one is sitting in it and then automatically unlocks when you sit down. Also new: a “nursery chair” for $430 with drop-down nursing pillows.

If we had to criticize Dutailier on something, it would have to be their cushions. Most are not machine washable (the covers can’t be zipped off and put into the washing machine). As a result, you’ll have to take them to a dry cleaner and pay big bucks to get them looking like new. A few of our readers have solved this problem by sewing slipcovers for their glider-rockers (most fabric stores carry pattern books for such items). Of course, if the cushions are shot, you can always order different ones when you move the glider-rocker into the family room—but that can be expensive, as replacement cushions are $150 to $300.

It can take ten to 12 weeks to order a custom Dutailier rocker (more for leather options), but the company does offer a “Quick Ship” program—a selection of around 15 to 20 chair styles in two or three different fabric choices that are in stock for shipment in two weeks. We have received occasional complaints about how long it takes to order a Dutailier—one reader special-ordered a Dutailier from a chain store, only to find out some weeks later that the fabric was discontinued (Dutailier “forgot” to tell the store, who, to their credit, tried to fix the problem immediately). Other readers complain about fabric backorders, which cause more delays in delivery. Our advice: make sure the store double checks the order with Dutailier.

Quality here is excellent. We toured Dutailier’s Quebec plant recently and were impressed with the high tech wizardry used in production—laser-guided water jets slice huge sheets of top-quality leather, computer-controlled ovens make sure stains are baked on chairs for an even finish and so on. At each step, quality is hand checked by an army of workers to insure consistency of fit and finish.

An optional accessory for glider rockers is the ottoman that glides too. These start at $150 at discounters, but most cost about $170 to $300. FYI: We’ve noticed more web sites selling glider and ottoman packages today with prices starting around $400.

One tip on rocking ottomans: we suggest skipping this and ordering an inexpensive “nursing” footstool (about $22). Why? Some moms claim the ottoman’s height puts additional strain on their backs while breast-feeding. While the nursing footstool doesn’t rock, it’s lower height puts less strain on your back. (That said, we should note that some ottoman fans point out that once their mom/baby get the hang of nursing, that gliding ottoman is a nice luxury).

One safety note: don’t leave an older child sitting in a glider-rocker. Many can be tipped over by a toddler when they climb out of it. (Safety tip: some glider rockers have a lever that locks it in position when not in use). Rating: A