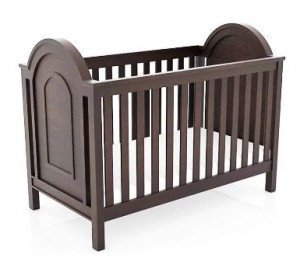 Lolly & Me claims the $270 Ellery crib is JPMA and Greenguard certified. Only one problem: it isn’t.

There is something disturbing about this company. Check out this post to their web page from a customer back in November 2015 about new nursery furniture the company had for sale on Walmart.com:

Don’t bother people. When it came it was broke. The damn thing was put together with staples where it broke. Called the company’s customer service… phone number out of service… same phone number on their website. Emailed the company….no response, still none six months later. Even posted on their facebook. Nothing. Took it back to local Walmart because that was the best option to get it handled quickly and Walmart’s website states that is an option when sold by them. The store gave me a hard time. So disgusted.

So we can’t tell what’s up with this company. Below is an archived review we wrote about Lolly & Me in 2016:

Minneapolis-based crib maker Lolly & Me is a relative newcomer to the nursery biz with a made-in-the-US focus. Founded in 2012 and sold semi-exclusively online on Target, Walmart and Kohl’s web sites, Lolly & Me’s cribs run $310 to $580. Combo dresser/changers run $270 to $550. The company offers nursery packages (crib plus dresser) for $600. (A handful of designs are also sold on Amazon).

Co-owner and designer Julie Kinsley has over 15 years experience designing cribs for companies like Ragazzi, Graco and College Woodwork. She also has designed exclusives for Target, although not in the nursery furniture area. Lolly & Me was born after the company pitched its designs as a affordable nursery furniture with eco-friendly touches.

To that end, Lolly & Me has two collections (McKinley and Sawyer) designated as “eco-friendly.” These collections are made in the U.S. at a small, family-owned factory in Utica, MI. (The rest of the Lolly & Me’s furniture is made in China).

FYI: Three of Lolly & Me’s seven finishes are what the company refers to as “Earth Smart”—Chocolate, Whitewash Driftwood and Natural are apparently water-based, low VOC and made in the U.S.

Lolly & Me’s web site is a bit vague when it comes to how their furniture is eco-friendly. The company says the furniture is “100% Earth Smart”, but is somewhat nebulous on what that means (example: the site claims its finishes are non-toxic . . . but so are every other crib maker’s).

We asked Lolly & Me’s Kinsley about this discrepancy and she said that while the company has designed its cribs to meet GREENGUARD’s strict requirements, it hasn’t fully paid GREENGUARD certification fee yet and therefore isn’t listed on their web site.

While we understand why a start-up furniture company would be cash-strapped to start (GREENGUARD certification costs $30,000—the testing isn’t cheap), this excuse doesn’t cut it for us. You don’t list a certification until your products are, well, certified.

GREENGUARD certification assures parents furniture meets strict low chemical emission standards. It is deceptive for Lolly & Me to list this on their web site (and on resellers) and not actually hold the designation. (Since we first wrote about this issue, Lolly & Me has quietly dropped the GREENGUARD claim from their web site and Target product listings; but there still is a GREENGUARD question on the company’s online FAQ. And as we went to press, we spotted a listing on Amazon for a Lolly & Me crib that still touted GREENGUARD certification).

And the product puffery didn’t end with GREENGUARD—Lolly & Me claimed its furniture was also JPMA safety-certified. That also isn’t true. Lolly & Me is a member of the JPMA and claims its products meet JPMA’s safety standards, but the company is NOT listed as JPMA certified as of this writing. Certification and membership are two different things. Again, that is deceptive.

When we pointed out this issue to Lolly & Me, owner Julie Kinsley told us they were planning to get their products certified by both the JPMA and GREENGUARD . . . in 2013. Well, as we write this, it is 2016 and the company is still not certified. And they are still claiming certifications as part of their product descriptions on Target and Amazon.

Update December 2018: Lolly & Me is finally JPMA-certified. While we are glad the company is now officially certified, it doesn’t erase the fact the company claimed the certification for years before actually achieved it.

How is the quality of Lolly & Me furniture? In general, good. Yes, Lolly & Me has had some quality issues as it ramped up for production, admitting they have struggled to fill demand. As a result, some cribs shipped out with incorrectly drilled holes for bolts and other quality glitches. We still see the occasional report of mis-drilled screw holes in online reviews, but in general, the feedback on this furniture is positive. (One issue that comes up time and again: the “white” finish Lolly & Me claims for its cribs is actually off-white or cream. That has frustrated some buyers).

Bottom line: Lolly & Me makes good furniture that is a decent value. But the bogus claims of GREENGUARD and JPMA certification give us pause—after we confronted the company’s owners with these issues and they promised us they’d correct the situation, they didn’t as of this writing. That’s a major red flag. As a result, we can’t recommend this brand. Rating: F

We obsess over baby gear . . . so you don't have to. Baby Bargains has one mission: help you find the best gear for your baby with unbiased reviews by experts with 20 years of experience. At prices that don't break the bank. When you purchase a product from links on this site, we make a small affiliate commission. Learn more about our work and how to support our site.
BabyBargains.com is a participant in the Amazon Services LLC Associates Program, an affiliate advertising program designed to provide a means for sites to earn advertising fees by advertising and linking to Amazon.com and its related sites.