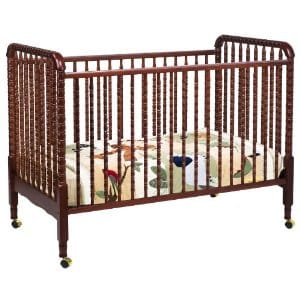 Jenny Lind or spool cribs are affordable—this one by DaVinci goes for $220.

You can’t shop for cribs and not hear the name “Jenny Lind.” Here’s an important point to remember: Jenny Lind isn’t a brand name; it refers to a particular style of crib. But how did it get the name? Jenny Lind was a popular Swedish soprano living in the 19th century. During her triumphal U.S. tour, it was said that Lind slept in a ” spool bed.” Hence, cribs that featured turned spindles (which look like stacked spools of thread) became known as Jenny Lind cribs. All this begs the question: what if today we still named juvenile furniture after famous singers? Would we have Lady Gaga cribs and Beyonce dressers? Nah.