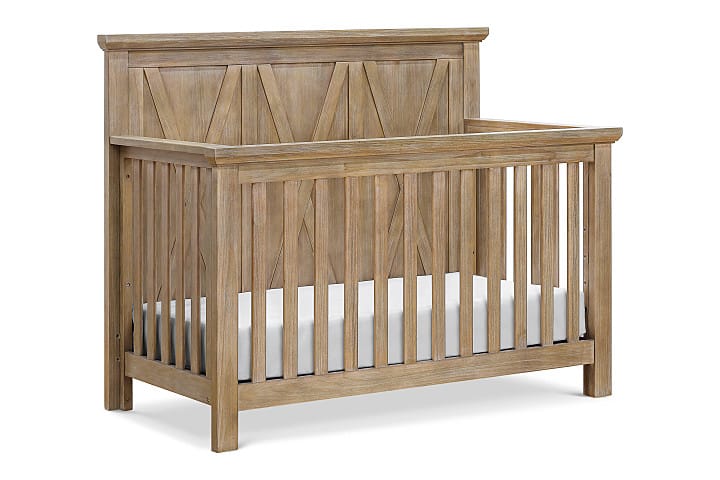 Launched in 2012 by Million Dollar Baby, Frankin & Ben was orginally described as “new traditionalist,” taking its cues from Federalist styling.

The line has evolved over time into more of a farmhouse vintage feel. it still features American poplar accents and birch veneers over MDF. The finishes incorporate weathered techniques, wirebrushing and more.

As an example, the Emory Farmhouse crib (pictured right) sports a weathered finish in driftwood.

Franklin & Ben is mostly sold in specialty stores. That’s a departure for Million Dollar Baby, a company that got its start selling low-price Jenny Lind cribs to discount stores and then its affordable DaVinci brand online.

We say “mostly” sold in specialty stores because a couple of Franklin & Ben’s cribs are sold online on Amazon as well as other sites.

The web site for Franklin & Ben is impressive, with detailed info on the brand and how it beats industry safety standards. We also liked the explanation of the company’s materials, stains and paints. We wish more manufacturers were this transparent. And there are even prices for some of the cribs and accessories posted online! What a concept. So how’s the quality? Good overall, say our readers. At this price range, Franklin & Ben competes with mid-priced brands such as Pali. While most folks say Franklin & Ben stacks up well against competitors, a few dissenters note the lack of quality control (example: misaligned spindles), which is a problem we noted in parent Million Dollar Baby’s review as well. If you sell someone a $500 crib, we expect there to be NO quality control issues.

One black eye for the brand: a 2014 recall of 1000 cribs for fronts that separated from the side panels, creating a hazardous gap. While there were no injuries associated with this defect, it does raise questions about whether Million Dollar Baby is expanding too quickly with its new brands and, again, not keeping an eye on quality control.

And let’s talk about the wood used in this line—poplar is harder than pine (seen in less expensive nursery furniture), but is still soft when compared to birch and beach. Hence, we have concerns that over time, this furniture could scratch and damage. It is possible that is would be less visible given the distressed finishes used in the line, however.

Bottom line: we like Franklin & Ben for its innovative designs and decent pricing. What holds this brand back from an A is their quality control issues—if you buy one of these cribs, make sure it is from a store or site with a good return policy. Rating: B+