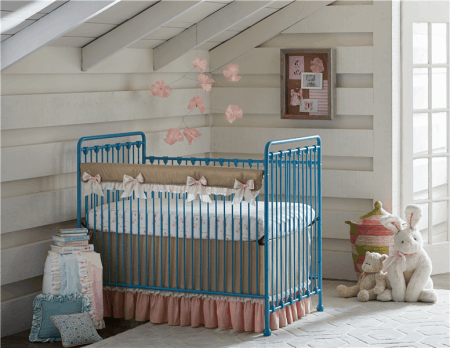 In early 2017, Baby’s Dream made a rather dramatic shift in its production—the brand said they were discontinuing all its wood furniture (produced in Chile) and switching to all metal cribs (made in China).

Baby’s Dream’s Chile plant has been beset by problems ever since it opened in the mid 2000’s—the most serious (and embarrassing for the company) was a 2015 recall for lead paint in 4600 cribs and furniture items.

Before that there were not one but two suspicious fires that burned down the plant and assorted natural disasters in Chile (earthquakes, tsunamis) that bedeviled production down there. All that was missing was plagues of frogs and locusts.

So it’s not surprising that Baby’s Dream is giving up on Chile. What is surprising is the company not moving wood baby furniture to China or Vietnam (as so many of their competitors have done). Instead, Baby’s Dream is abandoning all its wood nursery furniture and emphasizing its metal cribs. This is either brilliant or insane—or both.

That’s because metal cribs have always made up a very small portion of the US nursery furniture market—we estimate under 1%. Perhaps Baby’s Dream sees an untapped niche here, but we’d guess the reason why metal cribs aren’t popular is that when folks think of a crib, they picture a wooden crib.

Besides, Baby’s Dream has no matching metal dressers for its metal crib—only a few changing tables. That’s the insane part, because dressers and case pieces make up more than 50% of the revenue for most baby furniture brands. So perhaps Baby’s Dream plans to re-launch a wood crib line later in 2017 and is just clearing out existing stock to start fresh (that’s just speculation on our part).

A family-owned business, Baby’s Dream is based in Georgia.

Their furniture is mostly sold in specialty stores—no chain stores carry the brand. And it is rarely sold online (only Kids N Cribs and WayFair sell it as of this writing). This devotion to specialty stores has a downside: Baby’s Dream is hard to find in some areas. Example: states with few independent baby retailers like Washington, Colorado and Virginia have nary a single dealer for this brand.

To address the lack of dealers in some areas, Baby’s Dream sells furniture direct from its own web site. You can also order online and have the furniture delivered to a Baby’s Dream dealer near you.

So how is the quality, given the prices? Well, that is a mixed picture. Baby’s Dream now discontinued wood dressers feature a “soft close” and full extension drawer glides. The overall fit and finish of the furniture is good.

But, there are two caveats: quality issues and delivery snafus.

All of Baby’s Dream wood furniture was made of pine—radiata pine from Chile. (The dressers are made of veneers over the pine). Compared to birch and beech used in other high-end furniture, pine is much softer. As a result it is prone to scratches. We also have seen scattered reports going back over ten years of the wood on Baby’s Dream dressers splitting and cracking, especially in areas with large swings in humidity (think the East Coast). That is simply unacceptable for a $700 dresser.

Then there is the issue of delivery snafus.

If items are in stock, delivery only takes six to eight weeks. But that is the rub: items that are not in stock can go on what we call F.B. (forever backorder)—retailers complain that while most items are in stock, there inevitably will be one item in an order that is back ordered for six months or more, frustrating retailer and consumer alike. Yes, you read that right: you may have to wait 20-24 weeks for some Baby’s Dream furniture.

Another gripe: if your crib has a defective part, there may be a long wait for replacement parts.

Finally, let’s talk about how Baby’s Dream the company is managed. Dysfunctional would be the word we’d use to describe it. There is always some calamity befalling the company. After a consumer complained about late delivery of a crib on a consumer forum, the company blamed the delay on “production issues along with fewer employees due to the Holiday season.” Yes, that surprise holiday season that always comes around at the same time every year. Really.

From Yelp to the Better Business Bureau,  there is a pattern here: orders run much later than the six to eight week promised delivery, phone messages and emails to customer service go unreturned and so on. Yes, production delays can happen with any nursery furniture line . . . but Baby’s Dream compounds the problem with poor customer service and other snafus that damage its brand.

We asked Baby’s Dream to comment on these complaints and they told us “over the last two years we have put enormous effort, energy and resources into inventory to reduce” shipping issues. The company claims they have “in stock status on almost every item in our product mix.” Yet we still see complaints online about Baby’s Dream’s customer service as recently as 2017.

Of course, many of the complaints about Baby’s Dream centered on quality issues with their wood furniture, which is now discontinued. The metal cribs are too new to gauge reader feedback yet, but so far, so good.

Bottom line: we only give this brand average marks, despite their recent efforts to right the ship. If you decide to purchase this brand, make sure the pieces you want are actually in stock at Baby’s Dream warehouse. Rating: C

We obsess over baby gear . . . so you don't have to. Baby Bargains has one mission: help you find the best gear for your baby with unbiased reviews by experts with 20 years of experience. At prices that don't break the bank. When you purchase a product from links on this site, we make a small affiliate commission. Learn more about our work and how to support our site.
BabyBargains.com is a participant in the Amazon Services LLC Associates Program, an affiliate advertising program designed to provide a means for sites to earn advertising fees by advertising and linking to Amazon.com and its related sites.