Original post Feb 20, 2018. CPSC sues Britax to force recall of hazardous BOB jogging strollers. In an unusual move, the government sued the maker of BOB jogging strollers, claiming the company is refusing to recall strollers it calls “hazardous.” Britax, the owner of BOB strollers, fired back at the government’s lawsuit, saying “there is no defect in these products. They are safe when used as instructed.” Let’s break down this story to answer some questions we’ve received from our readers.

What is this dispute about?

The Consumer Product Safety Commission says that 17 models of BOB strollers are defective because the “quick release” front wheel can detach. “The design of the strollers allows a consumer to use the stroller without the front wheel being properly secured,” says the CPSC in a press release.

What models are affected?

Why are models made after 2015 not affected?

Britax redesigned BOB strollers in 2015 and made changes to the quick release wheel design. A spokesperson for Britax/BOB told BabyBargains.com in an email that this redesign “was not due to any defect with the original design.”

So what is the concern here?

As you can imagine, if the front wheel of a stroller detaches when in motion, bad things can happen. The CPSC says: “Since January 2012, approximately 200 consumers have reported front wheel detachments while using the stroller, resulting in at least 97 injuries to children and adult consumers. At least 50 children and 47 adults have been injured.” In a report to SaferProducts.gov, one parent described what happened when the front wheel came off while running with her BOB Ironman Dualie:

Running with kids in BOB Ironman Dualie running stroller when front wheel came off and forks hit pavement causing stroller to flip over front and land on top of children. Both strapped in however both still hit their heads on street surface. Took both children to pediatric ER for evaluation. Both checked out OK one with bruise and one with abrasions and bruising. I suffered a few cuts and abrasions as well as some pulled muscles.

At the crash scene I noticed the tension nut had come off the quick release for the front wheel and could not be found. The quick release was tight and properly secured at the start of the run. Not sure how the nut could have come completely off (un-threaded a significant number of turns) on it’s own even if the release lever had accidently been loosened without noticing the wheel being loose. It’s like the nut broke or fell off forcefully causing the wheel axle to fall from the dropouts.

Another parent said after only one week of use in 2014, the wheel flew off her BOB stroller while running “causing my baby to do 2 flips forward.” Here’s what her stroller looked like after the accident: 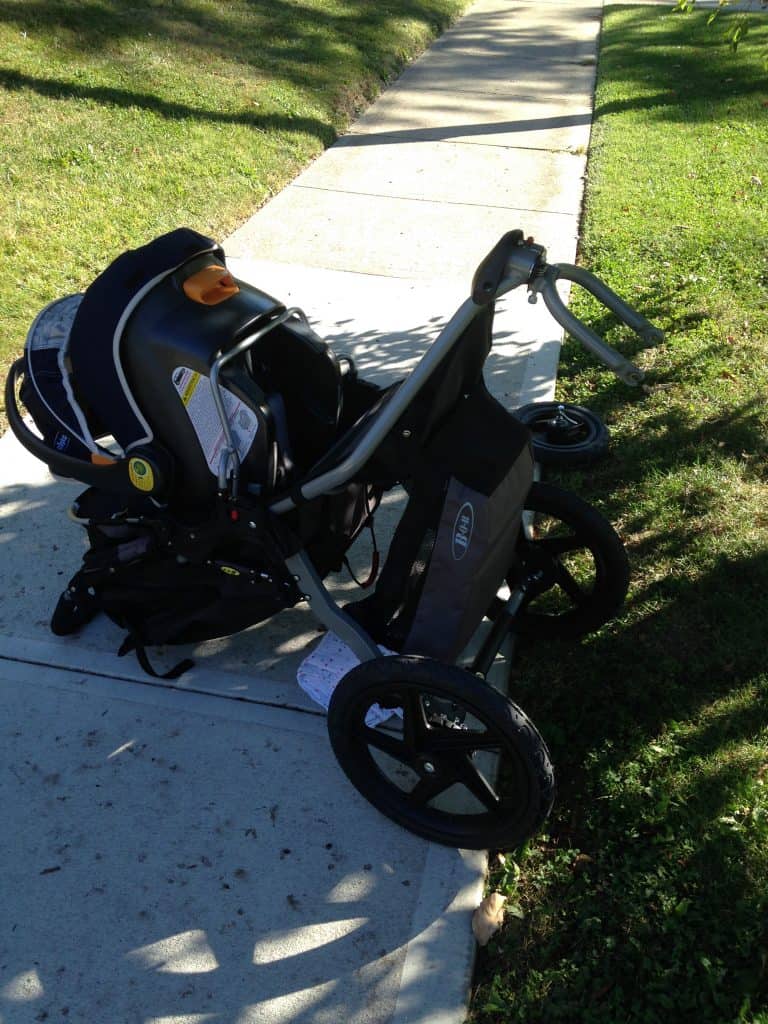 What is Britax/BOB’s response to this government lawsuit?

BOB’s parent Britax issued a statement after the CPSC’s lawsuit was filed, saying the strollers are safe. The company claimed consumers were at fault because they failed to make sure the front wheel was properly secured:

Front wheel detachments are not due to any defect in the product design; they involve an improperly secured quick release mechanism and/or jogging with the swivel wheel unlocked. Detailed instructions and videos on securing the quick release and locking the front wheel are available on the BOB gear website and in the User Guide.

The company said there “is no defect in these products” and that the quick release wheel has a “history stretching back decades—first in bicycles and then in strollers. While we respect the CPSC and its mission, we cannot agree to recall a product that is not defective.” The quick release wheel enables the stroller to be folded and stored in a more compact manner. In its discussions with government safety regulators, Britax/BOB claimed the “CPSC wants to eliminate this functionality.”

Updated Feb 21, 2018: After we first published this blog post, Britax sent us this additional statement:

“With more than half-a-million products in the market for 20 years, the number of reported injuries is very low. “We never want anyone to get injured while using one of our products, which is why we design, engineer, and test them for safety, and provide detailed instructions and warnings in our User Guides and on our website,” said Sarah Tilton, Director of Consumer Advocacy.

“We have issued recalls in the past, which shows that we take action when necessary to voluntarily recall a product. Because the front wheel does not detach if the quick release is properly secured, we stand by our jogging strollers and our consumers who have chosen this product.”

Wouldn’t it be obvious if the quick release lever wasn’t properly engaged?

Yes, BOB included information in the instruction manual about proper installation and use of the quick release lever. In 2013, BOB posted this video to YouTube with details:

BOB also included a removable hangtag that was attached to the strollers in 2013 to warn of incorrect quick release lever adjustments. The government points out that this warning would not be seen by subsequent purchasers of strollers on the second-hand market.

Why doesn’t the government just order a safety recall of these strollers?

Recalls are typically voluntary—the government works with companies to do safety recalls. If a company refuses, the CPSC must file suit to force a recall. That’s what’s happening here.

What should I do if I have one of these strollers?

We would advise parents to NOT use any of BOB stroller made before 2015 until this safety issue is resolved.

How does this affect Baby Bargains stroller recommendations?

We have withdrawn our recommendation of BOB strollers pending the result of this court action. While it is true that BOB redesigned these strollers in 2015 and the government is not alleging that current models have the quick release lever defect, we are dismayed that the company is refusing to recall past strollers that have implicated in over 200 incidents and 50 injuries to children. As a result, we no longer recommend BOB strollers at the current time.

This has affected our recommendations for Best All-Terrain Stroller and Best Jogging Stroller.  We will reevaluate this situation pending the outcome of this case.