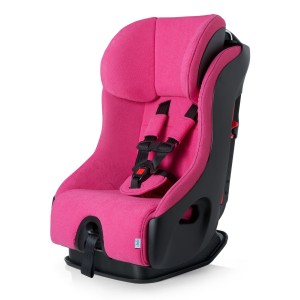 NHTSA ease of use rating: Three out of five stars (rear or forward facing).

Cons: Skimpy seat padding. Can’t be used for infants who are not sitting up on on their own yet, unless you buy separate $70 infant insert. Pricey. Poor score by Consumer Reports.

Comments: Clek’s flagship seat the Foonf made a splash when it debuted with advanced crash protection, rigid LATCH connectors and an anti-rebound bar. But the seat’s large bulk and weight quickly became an issue, as some parents complained it required a cavernous rear seat to work.

So Clek has rolled out the Fllo, which it bills as a more compact version of the Foonf. Here are the main differences:

• The rigid LATCH detachable base on the Foonf is replaced by a non-removable base that is more compact and has an integrated rear-facing recline feature.

• The Fllo weighs about 10 lbs. less than the Foonf.

• The Fllo is about four inches smaller from front to back, if you remove the anti-rebound bar. The shell is about an inch shorter.

In our opinion, Fllo suffers from the same drawbacks as the Foonf—namely, the lack of seat padding that makes it about as comfortable as a gym bleacher. This is an odd oversight for a $400 seat. On the plus side, the changes to the Fllo trim about $100 off the retail price of the seat compared to the Foonf. New for 2018, the Fllo will be available in their new 100% merino wool Mammoth fabrics. The wool is naturally flame retardant, so there are no added flame-retardant chemicals.

We’re a bit perplexed about the marketing of this seat as compact. Yes, it shaves an inch here and there compared to the massive Foonf. But a seat with a shell that is 31″ tall is still huge compared to market leaders Britax’s seats, whose shell is 28.5″ tall with the headrest fully extended on the Boulevard. (Yeah, 2.5″ may not sound like much, but it could be the difference between fitting in a vehicle and not, especially rear-facing). When used with the anti-rebound bar, the Fllo requires a massive 32.5″ of room. Yep, nearly 3 feet.

Yes, the Clek Fllo has a recline feature, but isn’t as deep as the Chicco NextFit and other seats in this price range.

You can’t use this seat until a child can sit up on his own and weighs 14 lbs.—that’s unusual for convertible seats, most of which start at 5 lbs. Clek does sell an optional accessory (the “infant-thingy”) for $70 that does accommodate infants weighing as little as 5 lbs.

Really? Another $70? We realize that most parents will use an infant car seat before the convertible—and most kids will be over 14 lbs. by the time they graduate from an infant seat . . . but no other premium convertible car seat requires an extra $70 hit to work with newborns.

Consumer Reports rates Clek Fllo near the bottom of their reviews. Overall, the Fllo didn’t score well, landing at 30th out of 32 seats. That’s embarrassing for a premium seat. Crash protection was judged as “better,” but the seat’s ease of use and troublesome forward-facing belt install dragged down CR’s assessment. The NHTSA echoed the ease of use issue with a three out of five star rating. Oddly, the ease of use complaint doesn’t quite jive with our reader feedback—our readers say it is ease to use. Although we would agree the seat belt lock-offs on this seat can be difficult to open/close, as well as the seat’s overall installation forward-facing with a seat belt can be quite tricky.

We’ll give this seat the same rating as the Foonf—we like the overall emphasis in safety, but the lack of seat padding and the large size limits its appeal. The extra $70 insert for infants knocks down the seat’s rating . . . the Fllo is simply too pricey. Rating: B-