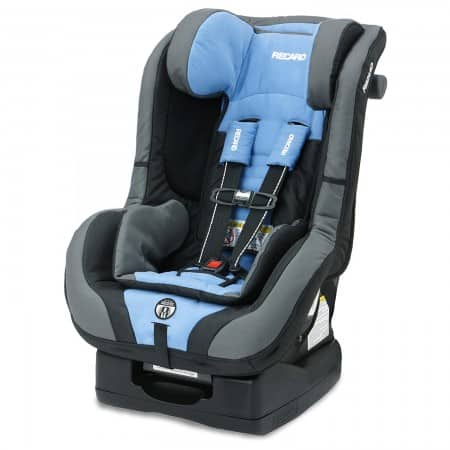 In May 2017, Baby Bargains learned that Recaro has discontinued all its car seats and strollers, as part of a plan to exit the North America market. We do not recommend the purchase of any discontinued car seat, as it is unclear how the company would support it in the future.

Comments: German car seat maker Recaro has faced a rocky road in recent years, most of its own making. After the tests showed their flagship car seat (the ProRide) failed government safety tests in late 2013 and early 2014, the company fought efforts by safety regulators to the recall the seats. After along battle, Recaro finally gave up and recalled 173,000 convertible seats in September 2015.

Then to add insult to injury, in October 2015) Consumer Reports found a second structural defect in the ProRide’s sister seat (Performance Ride). This is unrelated to the original test failure back in 2013.

All this tumult lead us to withdraw our recommendation of Recaro’s convertibles for the last several years.

If you are still with us and haven’t clicked away after reading all that, let’s discuss the ProRide ($182) and its siblings.

Among the ProRIDE’s unique features: side-impact protection wings made of cushy EPP foam. Similar to the Britax Boulevard, these wings provide both crash protection and head support for napping toddlers. The seat has many seat adjustments and the plush, microfiber fabric is impressive.

The negatives? Well, like the Britax Marathon, this is a big seat—it may not fit rear facing into smaller vehicles. A few parents told us they found the ProRIDE’s head pillows to be too restrictive for their older toddlers. And Recaro’s thinner distribution (as of this writing, Recaro isn’t in as many stores as Britax) means you may have to search for a local store that carries it to see this seat in person.

There is also a luxe version of this seat called the PerformanceRIDE. It has all the features of the ProRIDE but adds an integrated harness and headrest (called HERO), built-in cup holders, memory foam and other upgrades. Price: $230 to $300.

In general, parent feedback on both versions of this seat is quite positive—most folks say the seats are easy to use, although more than one noted their seats’ large size makes for a tight fit in smaller vehicles. Compared to the similar Britax seats, readers like the head cushions (side-impact protection) somewhat better.

In late 2015, Recaro made some minor updates to these seats and debuted two new versions called the PerformanceRACER ($300) and PerformanceRALLY ($330). The Racer version features integrated cup holders that double as an energy-absorbing rebound system in a crash. Who knew cup holders could do that? The PreformanceRALLY ($330) is much like the Racer but adds an additional seat recline feature. This is for use when the seat is rear-facing.

Bottom line: this seats (and the Recaro brand) have been snake bit. As a result of all the bad press, these seats are also hard to find in stores now. We say pass.