This car seat is discontinued but still available online. Here is an archived review. 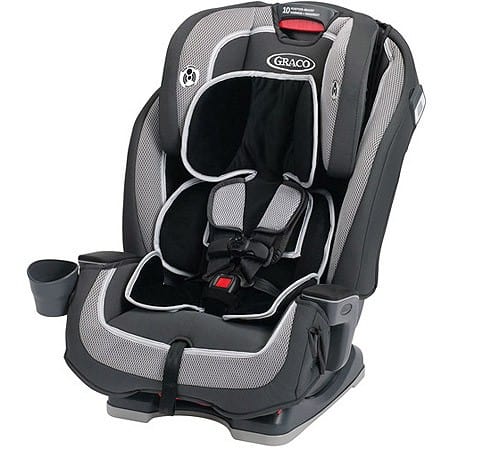 Pros: All in one seat works from 5 lbs. through booster mode. Affordable. No rethread harness.

Cons: Doesn’t work as a backless booster, as sister model 4Ever does. Only one cup holder. Some downgrades versus Graco 4Ever.

Comments: After struggling in years’ past with the all-in-one car seat category, Graco has hit a home run with the new $239 4Ever and its sibling, the $182 Milestone.

Key features of the Milestone include EPS foam lined seat, side impact protection headwings, four position recline and an adjustable headrest. The seat pad is removable and machine washable. We liked the no rethread harness, which is impressive at this price level.

The Milestone was released back in 2014 and reader feedback has been quite positive. Fans like the seat’s overall comfort and value—at $200, the extended use of the seat (from convertible to high back booster) wins many fans.

When the Milestone and 4Ever were launched, there was a $70+ price difference between the two. As of this writing, that has narrowed to $57. Given the numerous upgrades with the 4Ever, it is probably worth the extra the bucks.

In their most recent ranking of all-one-seats, Consumer Reports gave the Milestone and 4Ever top marks over competing seats like the Evenflo Symphony. And we would agree with that sentiment, given our own reader feedback.

We’ll give the Milestone the same rating as the 4Ever as they are essentially the same seat—but the Graco 4Ever is the better buy. Rating: A-