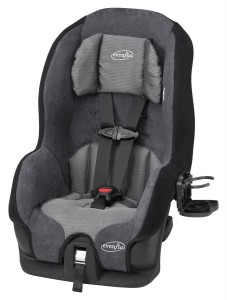 Cons: Competitors have better ease of use. Skimpy padding.

Comments: The Evenflo Tribute is the opening price point seat for Evenflo: starting at $45, the Tribute comes in several trim levels (Sport, LX, DLX). The only difference between the trims is fabric: Sport is the least fancy, LX is the “deluxe” version which also adds a cup holder. Walmart sells the DLX version of the Tribute; same basic seat, different fabric, includes cup holder.

Like the Cosco Scenera (the Tribute’s main competition at this price point), the Tribute is a bare bones seat: while you do get EPS foam for crash protection, there is no added side impact protection. The padding is very basic. Want to change the harness height? You’ll have to rethread the harness. And the seat only works to 40 lbs. (Evenflo’s expensive seats work up to 50 or 65 lbs., like the Titan).

On the plus side, the Tribute works rear-facing to 40 lbs., which will enable the average child to be rear-facing to age two (as is the recommendation). FYI: A couple older versions of the Tribute that only work to 35 lbs. rear-facing are still being sold in some stores and online.

So if you are looking at the Evenflo Tribute versus the Cosco Scenera, which one would be best for a second vehicle or Grandma’s car?

Most parent reviews on the Tribute are positive—fans say this seat is great for travel (airplanes, rental cars). But the lack of padding will make it uncomfortable for long driving trips. And some parents complain it is difficult to install rear facing.

Bottom line: Between the two entry level seats (Cosco Scenera and the Evenflo Tribute), we like the Cosco Scenera Next better.