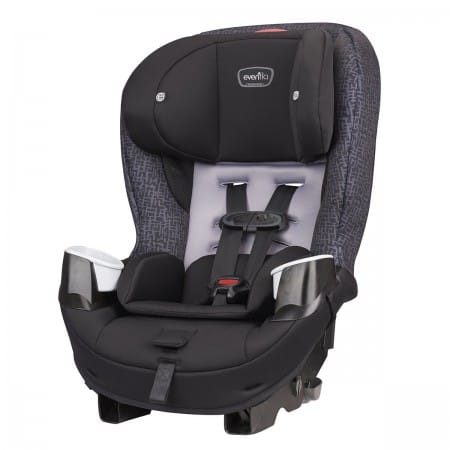 Comments: The Evenflo Stratos is much the same as Evenflo’s Sonus 65, but adds premium LATCH connectors and Evenflo’s SureLatch system, which Evenflo claims is easier to use for installation that standard LATCH hooks.

We would tend to agree with that sentiment, but premium LATCH is most helpful if you plan to install and uninstall the seat frequently (moving it between vehicles, for example). Otherwise, it is nice but not necessary.

The Stratos is a relatively new seat (released in late 2016), so as of this writing, it has been rated by the NHTSA for ease of use, nor has it been crash-tested by Consumer Reports.

Bottom line: at $106-$130, the Evenflo Stratos is a good value for a seat with a 65 lb. weight limit AND side impact protection. Since we’ve receive very little feedback on this seat and it hasn’t been independently crash tested, we’ll wait to assign a rating. Rating: Not Yet.