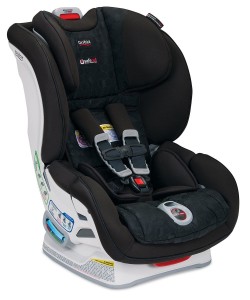 Pros: Very similar to the Marathon, but with additional side impact protection with headrest. Two additional harness slots enable longer use with bigger toddlers.

Comments: This seat is virtually the same as the Marathon, with one significant difference: what Britax calls “true impact protection.” Basically, this is a reinforced headrest that protects your child in a side-impact collision. The Boulevard also has SafeCell HUGS pads and a top harness slot that is about two inches higher than the Marathon (hence you can use it for a longer period of time).

The Boulevard’s ClickTight base is a seat that pops forward for a quick and easy install without any tugging on the belt (or dealing with LATCH issues). The base also has seven recline positions. The Boulevard also comes with SafeCell (which absorbs energy in the base) and integrated steel bars.

In late 2016, Britax updated the Boulevard to include a new version (Boulevard ARB, $328) that features an anti-rebound bar for rear-facing use. This padded steel bar attaches to the foot-end of the seat and prevents the seat from snapping back in an accident. Britax claims safety testing showed anti-rebound bars reduced seat rebound by 40% and helps stabilize the seat even in side-impact and rear-end crashes.

Reader feedback has been very positive on the Clicktight.  The Boulevard scored “basic” crash protection (on a three level scale: basic, better, best) in testing by Consumer Reports, ranking sixth overall (out of 32 seats). CR tested the Boulevard without the anti-rebound bar, so it is unclear if it would have scored better on crash protection in that case.

The government’s ease of use rating is also excellent. Our readers concur—this seat’s secret sauce is its ease of use (easy to install, adjust, etc.).

Are there any disadvantages to the Boulevard? Well, this is a bulky (and heavy) seat. So moving it from car to car would be a major chore. The Boulevard may not fit well in smaller vehicles, especially rear-facing. We also see a few complaints that the crotch strap is too short for larger toddlers.

Yes, this seat was part of a safety recall of all ClickTight seats in mid 2015 for a defective buckle; seats made after August 2015 have been fixed, however.

If you can afford the ARB update and have a roomy back seat, we would recommend it for additional crash protection.