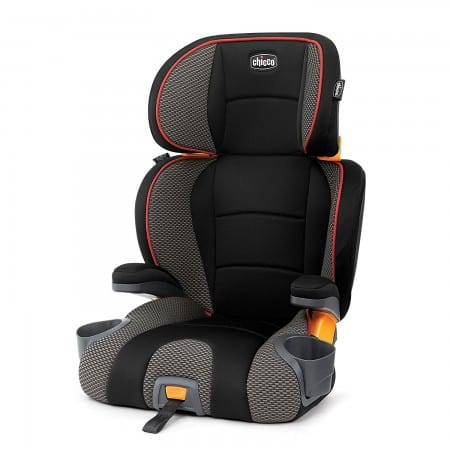 Booster type: High back and backless

Cons: Base model is exclusive to Target. A few reports that the cover can come off too easily on base model.

Comments: The new Chicco KidFit booster debuted in 2015 as a new, more affordable booster from Chicco (their previous effort, the Strada, clocked in at $150). The headline here is Chicco’s “DuoZone” side impact protection—a headrest with ten positions. Also new: Chicco brings its SuperCinch LATCH tightener system (seen on the NextFit convertible seat) to the KidFit, making installation and tightening of the belt easier.

The KidFit is billed as a 2-in-1 seat—it can be used as a high back booster and then can be converted to a backless model (up to 110 lbs.). The seat also has two folding cup holders and the back has two positions to better fit vehicle back seats.

The KidFit base model is now less than $100—that’s a good price, considering the features like the extra foam padding in the seat. We also now see a KidFit Zip on Amazon for $130—this model is the same but features a cover that zips off for cleaning. (The KidFit Zip also comes with a small covered snack tray that fits on either side of the seat).

Fans of this seat say it easy to use (and the government gave the KidFit four of five stars for this) and has decent seat padding for a ~$100 seat. We did see a few reports of the cover coming off too easily on the base model, but overall folks seem happy with the KidFit. Between the two versions, we’d spring for the KidFit Zip—the extra money is probably worth it for the ease of cleaning.