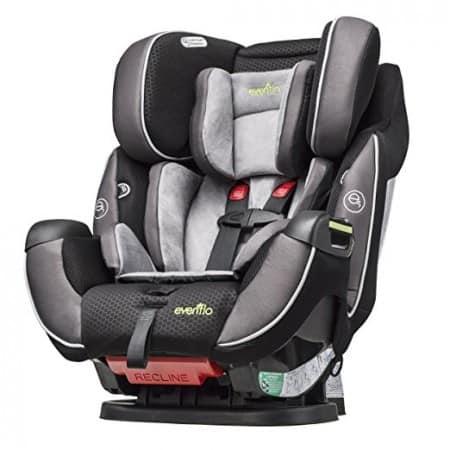 Type: All in one: convertible seat and booster.

Cons: Too short for extended use as booster, fabric hard to remove for cleaning, no safety belt lock-offs. Very wide.

Comments: First released back in 2008, the Symphony is Evenflo’s attempt at that car seat holy grail—the all-in-one seat that works with newborns up to kids who weigh 110 lbs., which would be your average 12 year old.

SureLATCH is the headline here: Evenflo’s new LATCH connectors that tout a “super-fast, tight and safe installation.” SureLATCH features built-in retractors that eliminate belt slack—this makes the Symphony one of the easier seats to install with LATCH. (Caveat: SureLATCH doesn’t work well in some vehicles.)

At the top end are the Platinum Symphonys—Evenflo adds Outlast fabric (which absorbs hot and cold temperatures) as well as a few other upgrades like buckle pockets to hold a harness when a child isn’t in the seat. The Platinum seats run about $250.

Parent feedback on the Symphony overall has been positive. Fans like the removable padding for infants and excellent harness adjuster. Even though this seat dates back to 2008, Evenflo has been tweaking it over the years. In the recent refresh, Evenflo added dual built-in cup holders to most versions of the Symphony.

As for ease of use, the Symphony earned three out of five stars from the NHTSA—not the best, not the worst.

Consumer Reports gives the Symphony a “very good” rating for crash protection. But . . . critics say the fabric can take an hour or more to remove for cleaning (it has to be unscrewed in various places). The harness is not removeable for cleaning. Also: there is no seat-belt lock-off (which helps insure a tight install when installing without LATCH), even for the most expensive Symphony’s. That’s disappointing at this price level. Finally, the seat is very wide—almost 20″. Forget putting three of these seats across a back seat or installing another car seat right next to the Symphony.

The Symphony has a 37″ rear-facing height limit, so that pretty much rules out extended rear-facing beyond two years (as some safety advocates advise).

We found the Symphony’s booster mode better designed than a similar model by Dorel’s Safety 1st—it’s easy to adjust and will provide a good fit for older kids. You can use the seat with LATCH in booster mode. BUT, the Symphony is not a very tall booster . . . that means kids will probably outgrow it by height long before the stated 120 lb. limit.

That’s why we aren’t big fans of all-in-one seats—there’s always something that holds it back from being truly all-in-one. Besides, the concept that one seat could last for seven or eight years (think of all the things that can go wrong with the fabric, spills, etc) seems far fetched to us.

Bottom line: this seat is probably one of the better attempts at an “all in one” seat. If you have your heart set on buying just one seat that works from birth to school, skip the Safety 1st’s All in One and go with the Symphony. 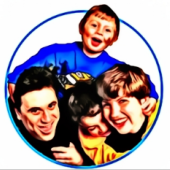