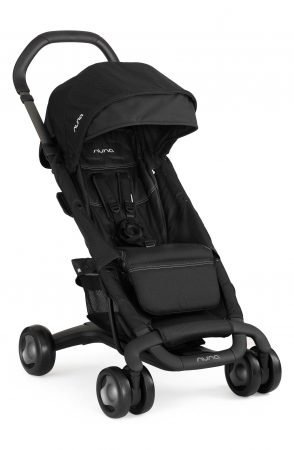 Despite the .eu domain, Nuna is actually a Pennsylvania-baed importer of baby gear from China. Yes, Nuna has a design office in the Netherlands . . . and that probably explains some of Nuna’s stroller design aesthetic.

The problem with European baby gear designers is they simply don’t get how Americans use a product like a stroller. Yes, European strollers have four wheels—and American strollers (for the most part) have four wheels. But the lifestyles of European parents are much different than here—their use of mass transit, where they walk . . . and even their need for cup holders.

Example: Italian strollers don’t have cup holders because when an Italian mom goes for coffee with her baby, she walks to a cafe, sits down and drinks coffee. We, on the other hand, drive to the nearest shopping center, hit the Starbucks for a coffee . . . and need a cup holder because we are walking and strolling. We’re a busy nation and we’re off to invent the next tech wonder gadget. The Dutch? Not so much.

Hence, most European-designed strollers bomb in the U.S. for several reasons. They are often heavy, cumbersome to fold (because you don’t often fold them much in Amsterdam?) and generally lack features like cup holders.

The models: The Nuna PEPP is a case in point (pictured). This $250 stroller aims to be a lightweight, super-maneuverable stroller for shopping the mall. And at 21.8 lbs., it does avoid the trap of other European-designed strollers that are way too heavy to haul in and out of a trunk. But still . . . the PEPP is 20% (four pounds) heavier than the best-sellers in this category like the Baby Jogger City Mini or Britax B-Agile.

And the PEPP’s other specs are equally disappointing—there is no full seat recline (only partial). And the seat reclines with two zippers, which are difficult to re-zip without getting the fabric stuck, etc. That’s why most top-rated strollers have simpler reclines. And the fold? That requires two hands and several steps. Again, Nuna’s Dutch designers must have extra time on their hands because the one-hand, one-step fold is what wins parents’ hearts here.

We liked the height adjustable handle and extra sun visor for the canopy; but the canopy’s overall coverage pales in comparison to the canopies on a BOB stroller, for example. The PEPP’s car seat adapter (included) will work with the PIPA, Nuna’s infant seat as well as with Maxi Cosi and Cybex infant seats.  The PEPP has an odd, low-to-the ground profile—we wonder if taller parents will find it cumbersome to buckle in baby. And of course, there is no standard cup holder.

In 2018, Nuna released a variation on the PEPP called the PEPP Next ($300), which is a more premium (read: more expensive, by $50) version of of the original PEPP.  For the extra $50, you get a black leatherette handlebar and upgraded fabrics and frame (glossy black finish, silver accent wheels).

But Nuna didn’t stop there—the PEPP Next also has an improved wheel suspension, bigger basket and zip-out mesh seat (for warmer days) and even an enhanced canopy with “dream drape.” Gone is the clunky fold of the original PEPP—the PEPP Next has a one-hand fold (hallelujah!).

All in all, probably worth it for the extra $50. Bonus: the PEPP Next is also 2.5 pounds lighter (19.4 lbs) versus the 21.8 lb. PEPP. Perhaps Nuna should just have sent the original PEPP to the discontinued graveyard and made the PEPP Next the only PEPP? 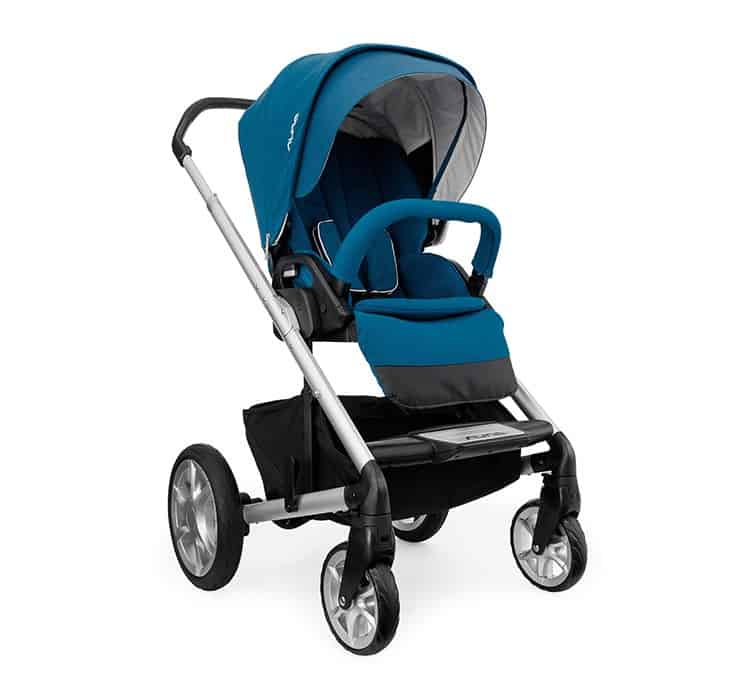 Next in the Nuna line is the MIXX (pictured above), a $500 stroller full feature stroller that includes car seat adapters for the PIPA, Maxi Cosi and Cybex infant seats, reversible seat, full recline, large canopy, rain cover and an easy flat fold. The stroller weighs in at 24.9 lbs.

For 2019, Nuna adds a “dream drape” to the MIXX’s canopy (which is now ventilated) plus a removable seat bad and larger basket. The handlebar now has a brown leatherette accent. 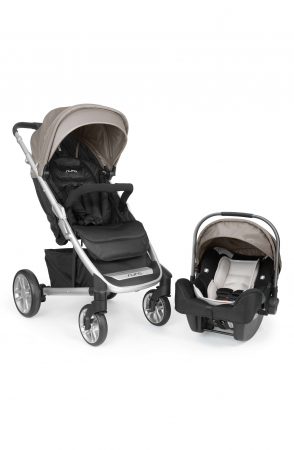 Recently, Nuna added its first travel system to the line, with the  the TAVO (pictured above). You can snap in Nuna’s PIPA car seat (without any adapters) for a travel system solution. The TAVO has a one hand fold, auto lock, full recline, adjustable foot rest that makes into a bassinet, adjustable handle, foam wheels, big basket and large, “cocoon” canopy. It’s pretty hefty at 24 lbs. Price: $350 for just the stroller, $650 for a travel system with PIPA car seat and base. Upgrades for 2018 (the company calls it the “2019 TAVO” for some reason) include better fabrics. The frame is now black and they’ve added faux leather accents.

2019 changes to the TAVO include a new all-weather seat, larger basket and leatherette accidents.

New in this past year, Nuna launched a multi-function stroller (single to double) called the DEMI Grow. You might notice that it has many of the same features as the IPPI: forward or rear-facing seat, three-position recline and all weather seating (mesh in the summer).

This $799 frame plus toddler seat can then be converted into a double. If you’d like to install an infant seat (the PIPA) included adapters allow that. A bassinet accessory ($180) is available too. The cool news: you can install a second full size seat below the original position (also $180 extra) without any additional adapters. Or two infant car seats. Or two bassinets. Or one of 23 different combinations.

The stroller folds with the upper seat attached using a two-handed trigger to a standing fold. It’s not a compact fold, however, so you’ll need some trunk space and it won’t fold with both seats attached. The canopy comes with a zip out Dream Drape like the PIPA car seat as well as a height adjustable handle. Each toddler seat will hold up to 50 lbs. We don’t have much feedback on the DEMI; we’ll update our review in the near future. 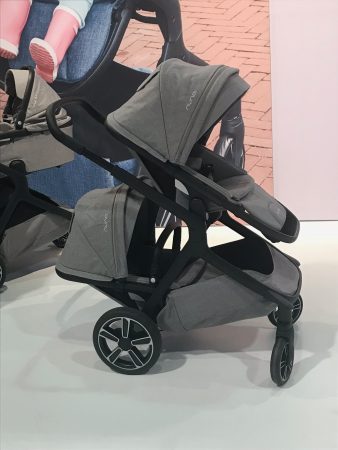 Nuna’s newest stroller release is called the Triv. Billed as a compact yet full featured stroller, the Triv weighs just under 20 lbs. with the seat attached (but without the canopy). It has an included attachment accessory so you can add any of Nuna’s car seats to make a travel system.

Other features include a reversible seat with three recline positions; napper bar; water repellent, extendable canopy with eyeshade and window; wool insert; rain cover; adjustable leg rest; rubber tires and height adjustable handle. The Triv has a one-hand compact fold but requires the removal of the seat or car seat. Good news: the adapter can stay on the frame when folding it.

Priced at $700, it’s not cheap, and retails for $50 more than the MIXX. We’re not sure why it costs more, but the two strollers have a lot in common, including the same canopy, adjustable handle, car seat adapter (only the TRIV can be folded with the adapter on the frame), and all-weather seats. The MIXX has five recline positions while the TRIV has only three and the TRIV has a smaller fold. The MIXX is about 7 pounds heavier than the TRIV, so that may make a big difference for some parents.

Our view. We haven’t heard much feedback from parents on Nuna, but the little feedback we’ve heard from readers has been positive. Fans like the smooth ride of the PEPP, flat fold and high style. Fans of the Nuna car seat love the TAVO because you don’t need an adapter to click it into the stroller. So if you’re interested in the infant seat (and you have the money), the TAVO would be a good choice.

Overall, the limited distribution (all their strollers are sold only in a handful of pricey stores and web sites like Nordstrom) makes it hard to get a good reading on this brand. Yet, overall, we were underwhelmed with Nuna, design and feature-wise.